This understanding could help commercial crops resist pathogens and drought. 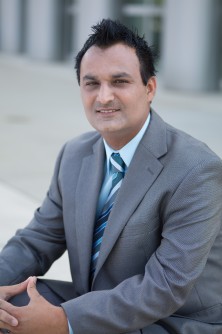 BIRMINGHAM, Ala. – Plants lack eyes and ears, but they can still see, hear, smell and respond to environmental cues and dangers — especially to virulent pathogens. They do this with the aid of hundreds of membrane proteins that can sense microbes or other stresses.

Only a small portion of these sensing proteins have been studied through classical genetics, and knowledge on how these sensors function by forming complexes with one another is scarce. Now, an international team of researchers from four nations — including Shahid Mukhtar, Ph.D., and graduate student Timothy “TC” Howton at the University of Alabama at Birmingham — has created the first network map for 200 of these proteins. The map shows how a few key proteins act as master nodes critical for network integrity, and the map also reveals unknown interactions.

“This is a pioneering work to identify the first layer of interactions among these proteins,” said Mukhtar, an assistant professor of biology in the UAB College of Arts and Sciences. “An understanding of these interactions could lead to ways to increase a plant’s resistance to pathogens, or to other stresses like heat, drought, salinity or cold shock. This can also provide a roadmap for future studies by scientists around the world.”

The international team, based in Europe, Canada and the United States, was led by Youssef Belkhadir, Ph.D., Gregor Mendel Institute of Molecular Plant Biology, Vienna, Austria. The study has been published in the journal Nature.

The novel comprehensive interaction network map focused on one of the most important classes of these sensing proteins — the leucine-rich repeat receptor kinases, or LRR-receptor kinases, which are structurally similar to human toll-like receptors.

The LRR-receptor kinases are a family of proteins in both plants and animals that are largely responsible for sensing the environment. In plants, they have an extracellular domain of the protein, extending beyond the cell membrane, which can recognize chemical signals, such as growth hormones or portions of proteins from pathogens. The receptor kinases then initiate responses to these signals inside the cell, using an intracellular domain of the protein.

The model plant Arabidopsis thaliana contains more than 600 different receptor kinases — 50 times more than humans — that are critical for plant growth, development, immunity and stress response. Until now, only a handful had known functions, and little was known about how the receptors might interact with each to coordinate responses to often-conflicting signals.

Positive interactions were used to produce an interaction map displaying how those receptor kinases interact with one another, in a total of 567 high-confidence interactions.

Laboratories of David Guttman, Ph.D., and Darrell Desveaux, Ph.D., at the University of Toronto, Canada, analyzed the receptor interaction map using algorithms to generate diverse hypotheses, and those predictions were validated in the labs of Belkhadir and Cyril Zipfel, Ph.D., The Sainsbury Laboratory, Norwich, United Kingdom.

The Mukhtar lab at UAB has cloned nearly all of the intracellular domains of the LRR-receptor kinases of Arabidopsis. “This is part of an effort to understand how plants react to pathogens or how pathogens hijack the immune system, an area of our interest,” Mukhtar said.

The most important one, dubbed APEX, was predicted to cause severe disruptions to the rest of the network if removed. Researchers found that removal of APEX, and several other known LRR-receptor kinases, indeed did impair plant development and immune responses, even though those responses are controlled by receptor kinases several network steps away from the APEX node.

This new understanding of how receptor kinases interact may help researchers identify important receptor kinases that can modify stress responses in commercial crops to make them resistant to environmental stresses like global warming and pathogens.

“The network developed in this study allows future researchers to comprehend the previously unknown connectivity of these receptors,” Howton said. “This knowledge can be used to better understand how plants are sensing their environment within the complete context of the plant cell surface receptors.”

Support for the Nature paper, “An extracellular network of Arabidopsis leucine-rich repeat receptor kinases,” came from grants from the Austrian Academy of Sciences, the Natural Sciences and Engineering Research Council of Canada Discovery Grants, a Canada Research Chair, and the Centre for the Analysis of Genome Evolution and Function. Funding also came from the Gatsby Charitable Foundation, the European Research Council, the Hertha Firnberg Programme, the Deutsche Forschungsgemeinschaft, the National Science Foundation IOS-1557796, the Austrian Federal Ministry of Science, Research & Economy, and the City of Vienna.