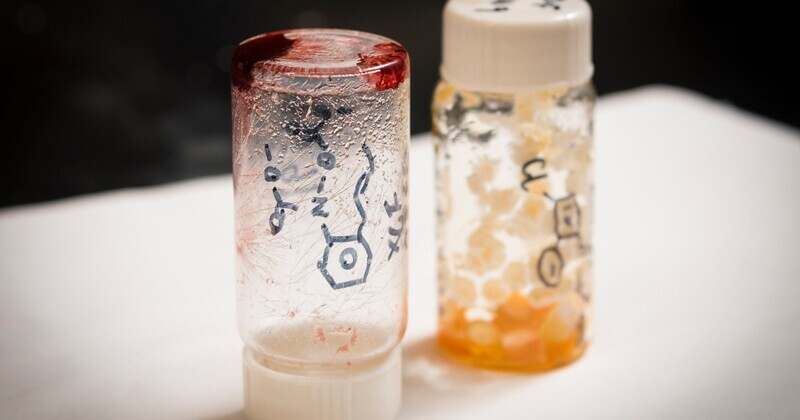 Prof. Donald A. Watson and doctoral students Feiyang Xu and Katerina Korch have found a new, easier way to make complex chemical structures known as indoline scaffolds that can be used in the development of new pharmaceuticals.

Almost 50 years since the late Richard Heck discovered the powerful chemical reaction that led to the University of Delaware professor’s 2010 Nobel Prize, chemists are still finding new and valuable ways to use the Heck Reaction.

One of them — Prof. Donald A. Watson — is part of the Department of Chemistry and Biochemistrywhere Heck taught during his time on UD’s faculty (1971-89). And Watson and his research group have just published new findings that could streamline development and production of small-molecule pharmaceuticals, which comprise the majority of medicines in use today. The active ingredients in these small-molecule drugs are typically delivered by a tablet or capsule and absorbed into the bloodstream.

Their work, published in Angewandte Chemie, shows how the Heck Reaction (which uses palladium as a catalyst to bond carbon molecules) can make it easier and more practical to produce indoline scaffolds — structures that provide an important platform for new molecules.

Indoline scaffolds are found in many natural products as well as medicines used to treat diseases including cancer, hypertension, migraine headaches and other conditions.

But producing these scaffolds has been challenging, especially when more complexity is required.

Watson and his group saw a new way to deploy the Heck Reaction, using nitrogen, an electron-craving element, to accomplish the assembly in previously unattempted ways and make complex assemblies accessible. With nitrogen as a reagent — the element that governs the chemical reaction — new possibilities emerged.

“Everything Heck focused on is based on carbon-based reagents,” Watson said. “We are asking, can this be applied to other elements in the periodic table? The answer to that in short is yes. That’s what we’re finding… We have looked at silicon, boron atoms and, now, nitrogen, which is directly relevant to the fabrication of bioactive compounds.”

A bioactive compound is used to provoke a specific biological response in a living organism. The bioactive compounds in medicines, for example, may be used to kill bacteria, lower blood pressure or kill cancer cells.

Watson credits doctoral student Feiyang Xu, the lead author of the article, with finding the path to this conversion process.

“I said, ‘wouldn’t it be great if we could figure out how to do this?’ And Feiyang figured it out,” Watson said.

“We’ve been exploring the parameters of what’s allowed,” Watson said, “and fleshing out the rules of how these new reactions work. And that’s our job as basic scientists, to define and provide tools for other chemists, to find where those tools will and will not work and what you can do with those tools.”

Key to the process is forcing nitrogen to do the chemist’s bidding in a twist that chemists call “ümpole.”

“Everything has its own inherent activity,” said doctoral student Katerina M. Korch, who helped to design experiments, develop a substrate table (that provides the results of all tests done on the compounds studied) and write the manuscript. “Doing the ümpole is forcing it do something it wouldn’t do naturally.”

Naturally, nitrogen is an electron hog. In this process, the researchers have created elements where nitrogen doesn’t have enough electrons, steering it in the direction needed for this process.

“Carbon is easy to do that with,” Watson said. “Getting nitrogen to behave this way in these types of reactions is the new thing that we’re trying to figure out how to exploit.”

As the work proceeds, Watson expects even more benefits.

“This chemistry is going to be very scalable,” he said. “And it uses readily available materials.”

“There are a million ways you can do things,” Watson said. “But some answers wind up better than others. This provides an easier way to prepare things, with more simple starting materials and streamlines how you can access more complex molecules.”

Murray Johnston, associate dean of the College of Arts and Sciences and professor of chemistry, said it was gratifying to see Watson and his group continuing to advance Heck’s science.

“The groundwork laid by Professor Heck continues to thrive at UD,” Johnston said. “In Don Watson and his group, we have a new generation of researchers who are modifying this chemistry in clever ways to make bioactive molecules.”

And that could lead to tremendous advances.

“What gets all of us up every day and motivates us to do what we do is this: There are a lot of medical needs in the world,” Watson said. “Our group tries to develop tools so medicinal chemists who are developing new medicines have those tools to make the compounds they need to treat disease.”

The Watson Group’s research was supported by grants from the National Institutes of Health and UD and the National Science Foundation and NIH both provided funding for instruments used during the work.

Prof. Donald A. Watson earned his bachelor’s degree in chemistry at the University of California San Diego in 1998 and his doctorate in organic chemistry at UC Irvine in 2004. He worked as a postdoctoral fellow at the National Institutes of Health from 2004-2006 and did postdoctoral work at the Massachusetts Institute of Technology from 2006 until joining the UD faculty in 2009. He won a National Science Foundation CAREER Award and a Cottrell Scholar Award in 2013 and served as associate chair for graduate studies and research from 2015-2018.

Feiyang Xu, a graduate of Juniata College, joined the Watson Group in 2015. Katerina Korch, who earned her master’s degree at the California Institute of Technology, joined the group in 2016.