Cerebral Palsy - It Can Be in Your Genes 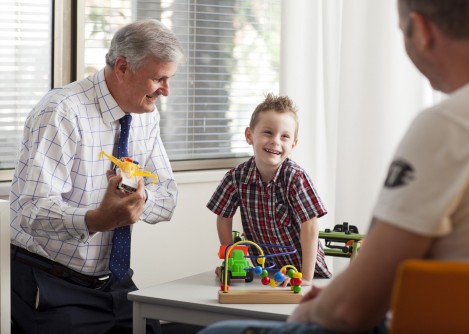 Newswise — An international research group led by a team at the University of Adelaide has made what they believe could be the biggest discovery into cerebral palsy in 20 years.

It has long been the belief that cerebral palsy occurs when a child experiences a lack of oxygen during pregnancy or at birth. However, the Australian Collaborative Cerebral Palsy Research Group, based at the University of Adelaide’s Robinson Research Institute, has found at least 14% of cerebral palsy cases are likely caused by a genetic mutation.

The findings of this research are published in the Nature journal, Molecular Psychiatry.

The Head of the Cerebral Palsy Research Group, Emeritus Professor Alastair MacLennan, says prior to this research it was believed that as little as 1% of cerebral palsy cases had a genetic cause.

“Cerebral palsy is a major neurodevelopmental disorder, which disrupts movement control, and it occurs in 1 in 400 children,” Emeritus Professor MacLennan says.

“While we have long suspected that genes may play a role in the development of cerebral palsy, it wasn’t until our research group mapped the DNA from cerebral palsy families that we could show genetic mutations are the likely cause of the condition in at least 14% of cases,” he says.

Professor Jozef Gecz, University of Adelaide genetic scientist, says because cerebral palsy is at least partly genetic in origin there will be significant changes in the approach to diagnosis, management and treatment of the condition.

“Our findings of genetic diversity in cerebral palsy are similar to the genetic architecture of other neurological disabilities, such as intellectual disabilities, epilepsies, autisms and schizophrenias,” Professor Gecz says.

“Our research will lead to early diagnosis of some cerebral palsies and aid preventative genetic techniques in the future. It should also reduce inappropriate litigation against obstetric medics – who at times are blamed for causing the condition – which has led to defensive obstetrics and unnecessarily high caesarean delivery rates,” he says.

University of Adelaide PhD student and lead author, Gai McMichael, who was supervised by Professors MacLennan and Gecz, says this dramatic research finding will change how people think about cerebral palsy. “These results will make many rethink assumptions about the causes of cerebral palsy, which can be devastating for all concerned and costs Australia billions of dollars each year,” says Ms McMichael. With the help of collaborators around Australia and in Houston, Texas, and with funding from the National Health and Medical Research Council and the Cerebral Palsy and Tenix Foundations, the University of Adelaide-based research group has gathered a unique DNA and clinical data cerebral palsy biobank, which is attracting international attention and further research collaboration.

This work has been the result of 20 years of research by the group. The team is continuing to seek further mutations in cerebral palsy cases, which will add to the percentage of cases with a genetic basis.