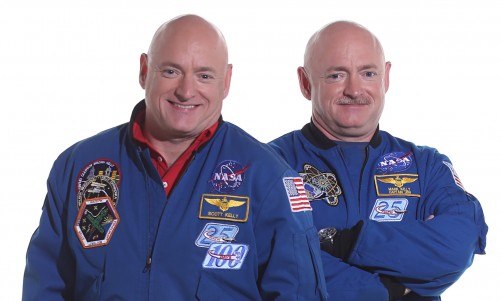 Identical twins Scott (left) and Mark Kelly. For a unique NASA study of how living in space affects the human body, Scott spent a year in space while Mark remained on Earth.

The Northwestern team is one of 10 NASA-funded research groups studying the Kelly twins to learn how living in space for a long period of time -- such as a mission to Mars -- affects the human body. While Scott spent nearly a year in space, his brother, Mark, remained on Earth, as a ground-based control.

“We are seeing changes associated with spaceflight, and they go away upon return to Earth,” said Fred W. Turek, the Charles E. and Emma H. Morrison Professor of Biology in the Weinberg College of Arts and Sciences. He is a co-leader of the study.

“It’s early in our analysis, so we don’t know yet what these changes mean,” said Martha H. Vitaterna, study co-leader and research associate professor of neurobiology at Northwestern. “We don’t know what it is about spaceflight that is driving the changes in gut microbes.”

The research team includes collaborators from Rush University Medical School and the University of Illinois at Chicago.

“We will be working closely with the other Twins Study teams to piece together a more complete picture of the effects of long space missions,” Turek said. “What we learn will help us safeguard the health of astronauts, and it will also help us improve human health on Earth.”

Turek reported his team’s preliminary research results at NASA’s Human Research Program’s annual Investigators’ Workshop, held last week in Galveston, Texas. This was the first meeting where the researchers with the 10 Twins Study teams, which are looking at different aspects of the twins’ physiology, could share their data with each other.

“We were very excited to learn what the other teams have discovered and to start thinking about how it fits with our findings,” Vitaterna said. “This is a big milestone -- we now know things we didn’t know before.”

The Northwestern study is unique: The researchers are comparing the effect of living at zero gravity for a year on a human’s gut microbiota -- the ‘bugs’ found naturally in the gastrointestinal tract (GI) to aid digestion -- with the normal fluctuations in these populations over the same time period in an on-Earth identical twin.

There was a shift in the balance between the two dominant groups of bacteria (Firmicutes and Bacteroidetes) in Scott Kelly’s GI tract when he was in space. The balance returned to pre-flight levels when Scott Kelly returned to Earth.

Fluctuations in the same bacterial groups were seen in Mark Kelly, the control on Earth, but the fluctuations were not as great as those seen in Scott Kelly in space.

Differences in the viral, bacterial and fungal populations between Scott Kelly and Mark Kelly were pronounced at all time points; however, this was expected when comparing different individuals, even identical twins.

The surprise finding was that a change in diversity of gut microbes (the number of different species) was not observed in Scott Kelly while in space.

The researchers cautioned that the findings are preliminary and that they have not had a chance to dig deeply to figure out what the data mean.

“This will happen in the coming months when we look at our findings in the context of what the other teams are finding,” Vitaterna said. “Right now, we do not see anything alarming or scary -- the Kelly twins seem to have healthy gut microbiomes.”