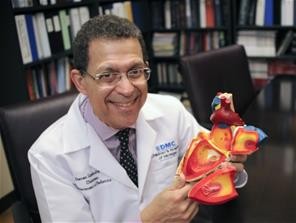 Newswise — A multi-center initiative involving 98 centers across the U.S. and Canada, conducted by the National Institutes of Health-supported Pediatric Cardiomyopathy Registry, has shown that for children with heart failure from dilated cardiomyopathy there has been a dramatic improvement in outcomes of medical management in the past few years. The study also shows that significantly fewer of these patients die from heart disease.

Results from this international study show for the first time improved transplant-free survival rates for pediatric dilated cardiomyopathy patients. The important findings appeared in an article titled “Survival without Cardiac Transplantation Among Children with Dilated Cardiomyopathy,” which were featured in the November 28, 2017 issue of the Journal of the American College of Cardiology.

The study, was conducted through The Pediatric Cardiomyopathy Registry, a National Heart, Lung, and Blood Institute and Children’s Cardiomyopathy Foundation sponsored registry. It was created to study the outcomes of children with various heart muscle disorders known as cardiomyopathies.

“We have been able to reduce failure of medical management by about 50% which translates to a large number of children with dilated cardiomyopathy who are alive without heart transplant compared to children with dilated cardiomyopathy at the same centers in the past who would have died. When you consider that in this population half the children who would have died are living this is truly incredible,” he says.

“Researchers believe the most likely reasons for this improvement could be improved medical therapy or increased use of mechanical support devices,” says Dr. Lipshultz. “This ground breaking study is the first report to show improved transplant-free survival for pediatric dilated cardiomyopathy patients followed by the Pediatric Cardiomyopathy Registry. Discovering how we can have these children reach better outcomes such as by documentation of best medical therapy and use of mechanical circulatory support, and then implementing these clinical practice guidelines to achieve these better outcomes, may lead to hundreds of children not needing a heart transplant or possibly preventing cardiac death,” he adds.

Lisa Yue, the founding executive director of the Children's Cardiomyopathy Foundation, which funded the study with the National Institutes of Health, says “the study shows how collaboration among research centers and funding organizations can lead to improved medical management and patient outcomes.” Mrs. Yue and her husband Eddie Yu lost two of their children to cardiomyopathy and formed the Foundation to advance research on pediatric cardiomyopathy.

“After working with Dr. Lipshultz and the Pediatric Cardiomyopathy Registry for so many years, it’s extremely encouraging that children with severe cardiomyopathy are twice as likely to be living now, even without a transplant,” says Mrs. Yue.

For further information about Children’s Hospital of Michigan visit www.childrensdmc.org or Request an Appointment.

About the Children’s Hospital of Michigan