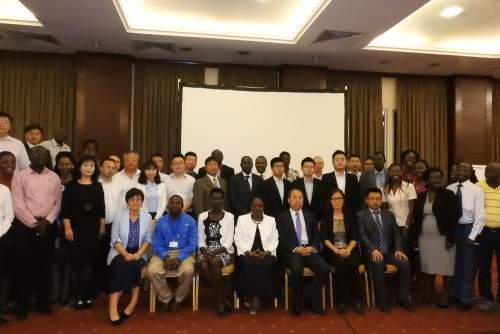 Participants of the recent forum on wildlife conservation and sustainable development in Africa.

At the forum entitled, “Challenges and Opportunities—Chinese Enterprises’ Engagement in Wildlife Conservation in Africa,” the Chamber pledged to strictly abide by the relevant laws and regulations of both countries, as well as instruct their employees to avoid involvement in the illegal trade of endangered wildlife and/or wildlife products, as well as acts that destroy the habitat of endangered species. Additionally, businesses will strive to make socially and environmentally responsible contributions to Uganda.

Ambassador Zheng Zhuqiang of The Embassy of the People’s Republic of China in Uganda, which supported the event, stated, “Wildlife protection is about our common future. It features prominently in the United Nations 2030 Agenda for Sustainable Development, which provides for the protection of ecosystems and their sustainable use in order to prevent the loss of biodiversity.”

The Ambassador emphasized a need for the international community to support law enforcement efforts in combating illegal wildlife trade — from the production of wildlife goods, to trafficking, to the final sale of wildlife products. He further underscored the importance of coordination between all countries in the implementation of the Convention on International Trade in Endangered Species of Wild Fauna and Flora (CITES) to honor their respective obligations.

Dr. Mary Goretti Kitutu, Uganda’s Minister of State for Environment of Ministry of Water and Environment said, “The Government of Uganda is fully committed to supporting efforts for biodiversity conservation to ensure sustained life on the planet for existing and future generations. While we appreciate the benefits associated with economic development projects, we must take into consideration adverse impacts on wildlife species and habitats resulting from development. This important workshop focused on enhancing best approaches for engaging key stakeholders, particularly government agencies and private companies, in biodiversity protection and the application of offsets, particularly steps outlined in the mitigation hierarchy approach.”

Through its investments and deepening influence in Africa, China has become increasingly concerned about wildlife conservation in Africa. Adherence by Chinese enterprises to effective and sound regulatory mechanisms and strict environmental standards has worked to their advantage.

Mr. Jianming Ding, Deputy General Manager of the China Communication Construction Company Uganda said, “Conservation of Uganda’s wildlife is a topic that will not only make the China-Uganda relationship stronger, but also shape how our businesses can go further in a sustainable way.”

The forum promoted the idea that as Chinese enterprises invest internationally, they need to recognize the significance of healthy ecosystems and biodiversity conservation, engage in more frequent dialogue with various stakeholders, and better implement the principles of sustainable development in Africa to achieve long-term, mutually beneficial development.

WCS Executive Vice President for Conservation and Science John Robinson said, “It’s great to see CECCU engaging with this issue and hopefully, others will follow suit.  Nations are beginning to place a premium on conserving wildlife and other natural resources. This commitment by CECCU will encourage other businesses in this and other lands to do the same. Ultimately, it is economically sound policy.”

This work was supported by the D.N. Batten Foundation; the USAID-supported Africa Biodiversity Collaborative Group; the Agence Francaise de Developpment-funded COMBO project (COnservation, impact Mitigation and Biodiversity Offsets in Africa); and the Science for Nature and People Partnership (SNAPP). SNAPP is a partnership of The Nature Conservancy, the Wildlife Conservation Society, and the National Center for Ecological Analysis and Synthesis (NCEAS) at the University of California, Santa Barbara.