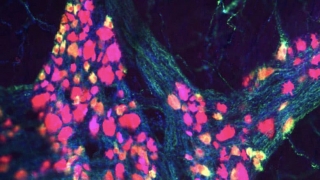 This Is A Three-Dimensional View Of The Enteric Nervous System

Newswise — Philadelphia, February 27, 2020 – In a groundbreaking discovery, researchers at Children’s Hospital of Philadelphia (CHOP) developed a new imaging method that allows scientists to view the enteric nervous system (ENS) – a key part of the human colon – in three dimensions by making other colon cells that normally block it invisible. The ENS has previously only been visible in thin tissue slices that provide limited clinical information. The findings were published online today in the journal Gastroenterology.

The ENS regulates many key functions of the bowel, such as the movement of food and nutrients, secretion of fluid, repair of the bowel lining and control of blood flow. Because the ENS has many nerve cell types that allow it to respond to changing conditions within the bowel independent of the brain or spinal cord, the ENS is sometimes called the body’s “second brain.”

The ENS is difficult to see with conventional imaging methods because it is buried within the bowel wall. Defects in the ENS cause Hirschsprung disease, a birth defect that requires surgical intervention, as well as other conditions in which food is unable to move properly through the bowel. ENS defects may also contribute to common problems like irritable bowel syndrome (IBS).

“Having three-dimensional images of the colon enteric nervous system provides us with new insight into the cells that control bowel function and may help us better understand disorders of the colon,” said Robert Heuckeroth, MD, PhD, a pediatric gastroenterologist in the Division of Gastroenterology, Hepatology and Nutrition at CHOP, Research Director and Norman and Irma Braman Endowed Chair of CHOP's Lustgarten Center for GI Motility and senior author of the study. “To do this work, we had to invent a new way to make the colon invisible, stain the cells we were interested in seeing and generate thousands of images.”

Using mouse and human colon tissues, the study team developed an imaging method that combined several techniques, including tissue and cell staining, the use of pinhole microscopes and quantitative analysis to characterize the cells of the colon in three dimensions. By not sectioning tissue, this new approach preserves the associations with other bowel cells in three-dimensional space. This is important in assessing bowel motility, which requires many cell types to work together to coordinate muscle contration and relaxation.

In total, the study team created 280 confocal Z-stacks – the process that allows them to render the images in three dimensions – and was able to acquire quantitative data from 14 adult human colons. Additionally, they were able to visualize the ENS in children with Hirschsprung disease.

“We believe our new approach will help us understand bowel diseases in more detail and could lead to new approaches to therapy,” Heuckeroth said.

The images generated from the study are now available on a public database.