The CSU is preparing the next generation of women filmmakers for California’s multibillion-dollar entertainment industry. 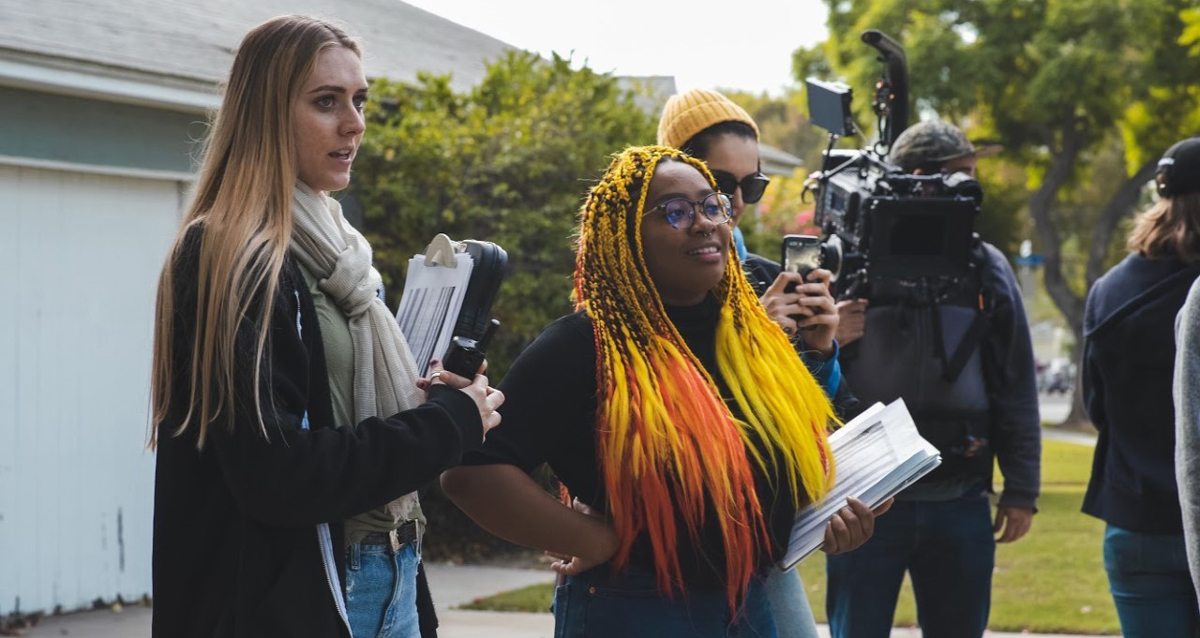 "During my time at CSULB, I was able to discover my voice as a filmmaker and what I want to share with the world," says Janine Anne Uyanga (center), pictured on the set of "Justice Delayed,"​ a film she directed and co-wrote, next to ​first assistant director and and CSULB student Abigail Victor.

Newswise — In the late 1970s, Thelma Vickroy was the only female student in her film class at California State University, Fullerton. As a graduate student at NYU in the early ’80s, she was one of three. Now the chair of the Department of Cinema and Television Arts at California State University, Northridge and an award-winning documentarian, Professor Vickroy says more than 50 percent of CSUN's program is comprised of women.

“The face of the student body has changed dramatically,” she says.

But as evidenced by the recent awards season (zero Oscar, Golden Globe or BAFTA nominations for female directors), women still face an uphill battle in Hollywood.

Helen Hood Scheer, award-winning documentary filmmaker and assistant professor in the Department of Film and Electronic Arts at California State University, Long Beach, explains that even though college classroom demographics are more equitable, “something happens after graduation that diminishes it. The problem is, ‘What happens next?’ There is not yet equal access to the jobs.”

It's an issue the CSU is committed to solving by bridging the gap from classroom to career.

“The CSU literally puts cameras and audio equipment in women’s hands and says, ‘You’re not going to break this. Let's go through and learn how to use all the buttons. You can do it,’” Scheer adds.

According to Women and Hollywood, only 4.3 percent of the top-grossing 1,200 films between 2007 and 2018 were directed by women. And with the Oscar results still lingering, it’s hard to forget the women left off the ballot this year: Lulu Wang (“The Farewell”), Olivia Wilde (“Booksmart”) and Greta Gerwig (“Little Women”), among others.

Directing award-winning mainstream fiction movies may still serve as the final frontier for women, but they are making strides in other arenas. For instance, at the 2020 Academy Awards, eight of the nine Best Picture films had at least one female producer, and every documentary feature nominee was either helmed or co-helmed by a woman. And according to the Center for the Study of Women in Television & Film at San Diego State University, “the percentage of top-grossing films featuring female protagonists rose from 31 percent in 2018 to 40 percent in 2019, reaching a historic high.”

“While there is still a long way to go dismantling the gender gap across the board, many people who control the hiring systems are aging out, and new people are getting hired,” Scheer says. “There's an ever-increasing amount of diversity at the top, which will help create more diversity at the bottom. Hopefully that will change what kind of stories are optioned and green-lit. Early access to the means of production is crucial, and we're definitely helping to conquer that in the CSU system.”

As the director of the School of Cinema at San Francisco State University, film scholar and independent filmmaker Celine Parreñas Shimizu, Ph.D., recognizes that “our school is the ground on which change in the industry should be seen and modeled. We need to formulate systems of teaching and learning that show how things could be done.”

On the first day of class, Dr. Shimizu talks to her students about how they will be entering one of the most inequitable industries in the world. “Something is then lifted off their shoulders, especially the women who are already anxious about the inequities they face. Once the problem is acknowledged, we can find solutions together.”

One way is to provide a curriculum in which students witness and engage diverse voices. “If we as faculty consider women’s stories important, then we shouldn’t only show films by white men in 'Introduction to Cinema' or our other core and foundational classes. We need to send a strong message that the canon is wide ranging and comes from different underrepresented voices. We should also have a diverse faculty in order to meet the needs of all our students.”

Budding female auteurs can also find support on campus through various programs such as SFSU’s Feminist Filmmakers’ Fellowship and CSULB’s Women in Film Association. “We’re teaching all our underrepresented students to stand up and advocate for themselves,” Scheer says. “Men are often trained by social values to be able to do this. A lot of our students from lower income backgrounds are trained to not ask for too much.”

Sometimes, smaller changes can also have a larger effect. For example, Professor David Waldman, head of the cinematography track at CSULB, makes it a point to use the pronoun “she” when speaking generically in class. “It’s impressive and noticeable,” Scheer says.

PREPPING FOR THEIR BIG BREAK

The CSU equips students with the necessary skills to break into the film industry. In addition to regular coursework, they're provided with internship opportunities, on-campus speaker series, résumé assistance and advice on finding a mentor to help pave the road.

“I bring award-winning filmmakers to campus all the time to do masterclasses and Q&As,” Scheer says. “And I talk to my students about my personal challenges and successes as a documentary filmmaker, so they understand what it all means in the real world.”

Another entry point into the competitive field of cinema is via the CSU’s vast network of alumni. Vickroy says she receives frequent requests from former students looking to fill positions. “Those connections are incredibly important and really help students.” The California State University Entertainment Alliance also offers networking, grants, career opportunities and an internship program.

In 2018, CSUN student Dilek Ince took home the Director’s Guild of America Jury Award for Outstanding Women Student Filmmakers for her work as producer/director on “Amal.” And this past December, CSUN student Jasmine Galdamez received a grant from The Caucus Foundation for Producers, Writers, Directors for her short “El Mozote.”​

“The film department at CSULB is like a very supportive family who wants to see you succeed,” Hernandez recalls. “They really challenged me in the best way possible. I remember thinking, How am I going to do that? and then later, Wow, look what I did!”

Vickroy is optimistic about the future of film and its growing inclusion of storytellers from all backgrounds. “The industry is now beginning to focus on funding women’s projects as women are attaining more powerful positions,” she says. Industry heavyweights now include names such as Reese Witherspoon, Issa Rae, Ava DuVernay, Shonda Rhimes and Amy Pascal.

Cable, animation, international markets and streaming providers are also opening up new opportunities. “The blockbusters still sell, but studios have to tell a lot more stories because the market is so big,” she continues.

The ultimate goal of the CSU is to prepare students who can shift with the ebbs and flows of the entertainment business. “When they graduate, camera technology is going to change, the industry is going to change,” Scheer says. “We want to prepare our students to be lifelong learners and have the skills and confidence to find out what they need to know.”

Hernandez is currently working as a post-production assistant on a Lee Daniels (“Monster’s Ball,” “Precious”) film. She hopes that one day soon there will be no need to differentiate based on gender and that everyone will simply be referred to as “filmmakers.” In the meantime, she offers this advice to aspiring female filmmakers: “Trust the process and trust your instincts. Don’t let anyone make you feel small or unworthy, especially yourself. You’re more capable than you realize. The answers will come with your experiences—so keep going.”

Explore how the CSU prepares students for successful careers in the entertainment industry.