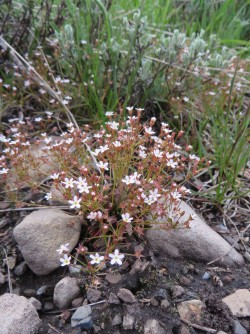 Newswise — New University of Colorado Boulder-led research has established a causal link between climate warming and the localized extinction of a common Rocky Mountain flowering plant, a result that could serve as a herald of future population declines.

The new study, which was published today in the journal Science Advances, found that warmer, drier conditions in line with future climate predictions decimated experimental populations of Androsace septentrionalis (Northern rock jasmine), a mountain wildflower found at elevations ranging from around 6,000 feet in Colorado’s foothills to over 14,000 feet at the top of Mt. Elbert.

The findings paint a bleak picture for the persistence of native flowering plants in the face of climate change and could serve as a herald for future species losses in mountain ecosystems over the next century.

“Much of our historical data about species’ population-level responses to climate change comes from observational studies, which can suggest but not confirm causation,” said Anne Marie Panetta, lead author of the study and a post-doctoral researcher in CU Boulder’s Department of Ecology and Evolutionary Biology (EBIO). “Here, we show the mechanisms directly at work.”

To conduct the study, which spans 25 years, the researchers set up experimental plots in the Warming Meadow, a field site located at the Rocky Mountain Biological Laboratory (RMBL) in Gunnison, Colorado. Since 1991, the Warming Meadow has used suspended infrared radiators to warm plots year-round in order to mimic temperature increases, creating the world’s longest-running active-heating climate change experiment.

The Warming Meadow’s radiators raise average soil temperatures by about three degrees Fahrenheit, decrease growing season soil moisture by up to twenty percent and advance the spring snowmelt date by up to a month in order to simulate predicted effects of climate change.

“The level of warming and the drier conditions in this experiment are not only realistic, but actually at the lower end of expectations for the next 50 to 100 years,” said Panetta. “Our estimates could be conservative. We have simulated a level of change that some systems have already seen and others will see.”

The study revealed that in plots where A. septentrionalis naturally occurs, warming caused precipitous declines in the abundance of both its seedlings and established plants at reproductive ages, driving population sizes close to zero. The dramatic effect on multiple stages of the plant’s lifecycle highlights the challenge of developing effective management policies for revitalizing a threatened population.

“We had thought that the plant’s evolutionary adaptations might save it, or that natural seed dispersal might help it survive,” said Panetta. “But the fact that we’ve seen extinction happen regardless bodes poorly.”