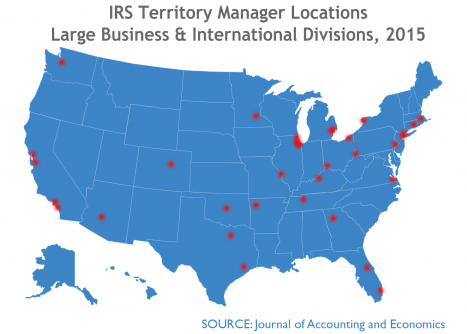 Credit: Journal of Accounting and Economics

Newswise — LAWRENCE – Geographic proximity to Internal Revenue Service offices make it more likely public companies will face an audit, but those companies also engage in greater tax avoidance, according to a study led by a University of Kansas accounting researcher.

"The intuition is that when two parties operate in close proximity there is more information on both sides. I know more about you. We may not have met, but we have mutual friends. And people I know may have dealt with you," said Tom Kubick, assistant professor of accounting in the KU School of Business.

Kubick and his co-authors had their findings published recently in the Journal of Accounting and Economics. They examined tax records of public companies from fiscal years 1996 to 2012 and found a positive association between a company's geographic proximity to an IRS territory manager’s office and IRS audit likelihood as well as tax avoidance.

They found one exception. There is less tax avoidance when companies are also in close proximity to an IRS industry specialist, who has specialized expertise in industry-specific tax issues. For example, oil and gas companies in Texas or technology companies in California would generally be more likely to be near industry specialists because those regions are hubs for those types of companies.

However, Kubick said one might view the findings about geographic proximity and tax avoidance surprising especially in an era when so much business is conducted virtually and online.

"One might ask whether proximity matters anymore" he said. "We find both the IRS and corporate taxpayers tend to act more aggressively, at least in terms of a higher likelihood of audit and greater tax avoidance respectively, when they are close to each other."

The findings could have implications for how the IRS allocates its resources and coordinates its audit efforts, Kubick said, because their study found audits of local taxpayers might not be the most efficient. Even though companies nearby an IRS regional office were more likely to be audited, on average, taxpayers still paid less tax than more distant companies even after an audit.

"We also found that when budgets are more constrained, audits tend to be more efficient for distant companies," Kubick said. "This reflects more care in what they do, perhaps due to the greater cost associated with auditing more distant companies."

The study could provide insight for the IRS in how it organizes regional enforcement and deploys industry specialists, and how geographic proximity influences corporate taxpayer behavior.

"For policymakers and perhaps even investors," Kubick said, "documenting this dual-party relationship that distance matters even in the information age is interesting."

Journal of Accounting and Economics