Learn more about Cornell research that shows even low levels of PCBs can have an impact on how some birds sing their songs. 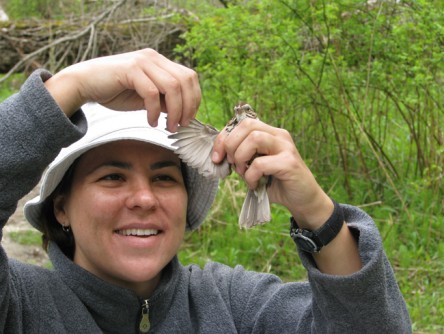 For her doctoral thesis at Cornell University’s Laboratory of Ornithology, Dr. Sara DeLeon studied birdsong as an indicator of effects of exposure to sublethal levels of contaminants such as PCBs (polychlorinated biphenyls) in the environment of the Hudson Valley.

This news release, including all Web extras, can also be found on New York Sea Grant's Web site at http://www.seagrant.sunysb.edu/articles/r/2349.

Newswise — In an article published today in the journal PLOS ONE, researchers at Cornell University’s Laboratory of Ornithology report that in some environments, songbirds exhibit inconsistency in their songs which may be caused by non-lethal levels of contaminants that persist in the sediments of the Hudson River region.

The research reported in “The Effect of Polychlorinated Biphenyls on the Song of Two Passerine Species,” was funded by New York Sea Grant, a joint program of the State University of New York, Cornell University and the National Oceanic and Atmospheric Administration.

"Dr. DeLeon's work would have brought a smile to the face of Rachel Carson,” said William Wise, Interim Director of New York Sea Grant. “This type of dedicated field research can tease out the impact of organic contaminants in the environment on creatures that are known to all of us. Sara and colleagues are drawing the connections between contaminant, animal behavior and, ultimately, a population's health."

Key among the team’s findings is that song disruption is tied to specific types of PCBs—there are 209 variations, differentiated by the positioning and number of chlorine atoms. DeLeon tested 41 of these variations to isolate their effects.

According to the authors, “Our results indicate that black-capped chickadees and song sparrows have higher total blood PCBs in regions with higher historic PCB contamination. The two bird species varied substantially in their congener-specific PCB profiles; within sites, song sparrows showed a significantly higher proportion of lower chlorinated PCBs, while black-capped chickadees had higher proportions of highly chlorinated PCBs.” Analysis of blood samples from black-capped chickadees showed greater variability in song with a change in the “glissando” ratio of the first note of their two-note song, “fee-bee, fee-bee.” Song sparrows, with much longer songs, also showed ‘high performance trills’ that may be the result of other types of PCB molecules that are less toxic. In areas of PCB pollution, the species-specific identity signal in black-capped chickadee song varied significantly, while variation in song sparrow trill performance was best predicted by the mono-ortho PCB load.

“Thus, PCBs may affect song production, an important component of communication in birds,” the authors report. In conclusion, “The ramifications of changes in song quality for bird populations may extend the toxic effects of environmental PCB pollution.”

Nordica Holochuck, New York Sea Grant’s Hudson Estuary specialist said, “This research is of great interest to stakeholders in the Hudson Valley as the effects of PCBs, even non-lethal ones, continue to be discovered.”

“Effects of PCBs are extremely complicated,” says co-author André Dhondt, director of Bird Population Studies at the Cornell Lab of Ornithology. “What this demonstrates is that most previous PCB studies may not give us the whole picture because they did not look at the specific type of PCB involved but just measured overall levels. What Sara did was not easy. She found effects on the song and wanted to do more than just document that there was an effect, but to isolate what was causing it.”

“Contaminants last a long time and are pervasive,” says DeLeon. “We have to take that into account when we study species in these disturbed environments and be aware of how environmental changes are affecting them.” Coauthors include Rayko Halitschke, Ralph S. Hames, André Kessler, DeVoogd and Dhondt.

More photos and mp3s of birdsongs are available via "Are Birds Singing a Different Tune?" [http://www.nyseagrant.org/articles/r/2228], a related feature story in the Fall 2012 issue of New York Coastlines, NYSG's flagship publication.