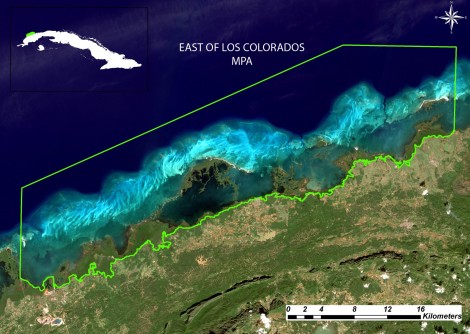 Establishment of this new protected area is a result of years of collective effort from communities, nonprofits, scientists, and protected area and fisheries authorities. It involved a participatory zoning process and building consensus in approving the proposed MPA, an extensive project supported by WCS every step of the way.

The new MPA encompasses 72,800 hectares (728 square kilometers/281 square miles) of coastal marine ecosystems, including mangroves, seagrass beds, and coral reefs - ecosystems that provide a first barrier of defense against severe storms and hurricanes worsened by climate change. It includes a 27,200-hectare (272 square kilometers/105 square miles) core “replenishment” zone called Corona San Carlos Wildlife Refuge, where no fishing is permitted, plus a series of other zones with limited and regulated activities where some sustainable use of natural resources is permitted.

“It has been inspiring to see people coming together to protect this incredible place,” said Natalia Rossi, Director of the WCS Cuba Program. “Understanding that the health of coral reefs, seagrasses and mangroves is connected to the quality and quantity of fish available was a key step of the process.”

Ecological surveys conducted in support of the establishment of this new MPA revealed an incredible range of biodiversity, including abundant populations of Antillean manatees found in seagrass beds, mouths of rivers and inlets across the archipelago; green, hawksbill and occasionally leatherback sea turtles; American crocodiles in the extensive coastal mangroves; and multiple types of shorebirds. The numerous keys and coastal vegetation in the MPA constitute an important corridor for North American migratory birds, and about half of Cuba’s endemic birds can be found here.

The creation of Este del Archipiélago de Los Colorados is part of a nation-wide effort by local communities, research institutions, local NGOs, and environmental authorities to increase the protection of the country’s coasts and waters. This MPA contributes to fulfilling global targets for marine conservation and coastal protection based on well-preserved coastal-marine ecosystems. WCS congratulates Cuba for this incredible achievement, and applauds the protection of important blue carbon ecosystems like mangroves and seagrass beds that increase climate change resilience.

“Protected areas play vital roles in combating the interrelated climate, biodiversity and human health crises – all of which are being felt deeply across the Caribbean Islands,” said Jenny Daltry, Re:wild’s Caribbean Alliance director. “I am delighted that Re:wild has been able to support Cuba's magnificent collaborative effort to conserve the Este del Archipiélago de Los Colorados, which, at well over 70,000 hectares, is now one of the biggest protected area in this region.”

WCS’s contributions to this important milestone for marine conservation have been generously supported by Re:wild, Bloomberg Philanthropies' Vibrant Oceans Initiative, Oceans 5 (a sponsored project of Rockefeller Philanthropy Advisors), and donors to the WCS MPA Fund. WCS is committed to working long-term with the managers and local communities of East of Los Colorados Archipelago to establish and maintain effective conservation management.

WCS Cuba is committed to protecting the country’s largest and wildest natural ecosystems, including viable populations of key species such as Cuban crocodiles, sharks and rays, sea turtles, corals, migratory birds, and island endemics. Cuba’s land and seascapes are essential to maintaining connectivity in the insular Caribbean and beyond and contain the region’s most exceptional and resilient marine ecosystems, sustaining local livelihoods and providing climate resilience to millions.