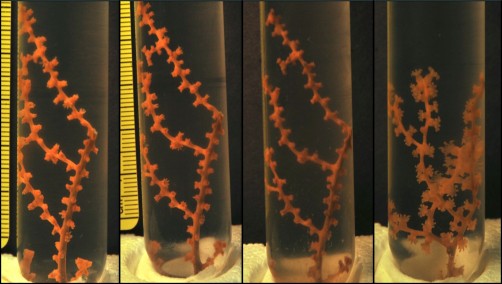 A coral specimen exposed to oil and dispersant displays declining health over time. The picture on the furthest right is a healthy control sample.

Newswise — The dispersant used to remediate the 2010 Deepwater Horizon oil spill in the Gulf of Mexico is more toxic to cold-water corals than the spilled oil, according to a study conducted at Temple University. The study comes on the eve of the spill’s fifth anniversary, April 20th.

The researchers’ findings, “Response of deep-water corals to oil and chemical dispersant exposure,” were published online in the journal Deep-Sea Research II.

Approximately five million barrels of crude oil escaped from the well drilled by the Deepwater Horizon oil rig in 2010, and nearly seven million liters of dispersants—chemical emulsifiers used to break down the oil—were used to clean it up. Normally applied to the water’s surface, the spill marked the first time that dispersants were applied at depth during an oil spill.

“Applying the dispersants at depth was a grand experiment being conducted in real-time,” said Erik Cordes, associate professor of biology at Temple, who has been studying Gulf of Mexico coral communities for more than a decade. “It was a desire to immediately do something about the oil coming out of the well, but they really didn’t know what was going to happen as a result.”

Following the 2010 spill, Cordes and his collaborators discovered several damaged Gulf coral populations that were coated with a dark colored flocculent slime that was found to contain oil from the spill and residues from the dispersants.

“We wanted to know if the damages that had been witnessed could have been caused by the oil, the dispersant itself, or a combination of both,” said Danielle DeLeo, a Temple doctoral student in Cordes’ lab, who was the study’s lead author. “We know that the corals in the Gulf were exposed to all of these different combinations, so we have been trying to determine the toxicity of the oil and the dispersants, and see what their impact would be on the corals.”

The researchers exposed the corals to a range of concentrations for both the dispersant and the oil to determine a lethal dose for each. They were surprised to find that the lethal concentration is much lower for the dispersant, meaning it is more toxic than the oil.

“It doesn’t take as much dispersant to kill a coral as it does oil,” Cordes said, adding that the oil in combination with the dispersant increases the toxicity of the oil.

Using dispersants is supposed to reduce the impact of oil spills on the environment, said Cordes, “but there’s increasing evidence that’s not what’s happening.”

Cordes said that his lab will be carrying out additional studies to try to replicate the concentrations of oil and dispersant that the corals were exposed to during the Gulf oil spill, but this is the first step in determining the toxic levels of dispersants and their impact on the environment. He said their findings could assist in developing future strategies for applying dispersants at oil spills that may be more helpful than harmful to the environment.

In addition to Cordes and DeLeo, the researchers included Iliana Baums and Dannise Ruiz-Ramos of Penn State. The study was funded by a grant from the Gulf of Mexico Research Initiative to the “Ecosystem Impacts of Oil and Gas Inputs to the Gulf” consortium.*****

Note: Copies of the study, as well as high-res images, are available to working journalists. E-mail [email protected].