Dragonfly Brains Predict the Path of Their Prey 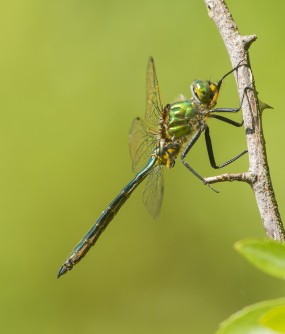 Newswise — New research from Australia and Sweden has shown how a dragonfly's brain anticipates the movement of its prey, enabling it to hunt successfully. This knowledge could lead to innovations in fields such as robot vision.

An article published today in the journal eLife by researchers at the University of Adelaide and Lund University has offered more insights into the complexity of brain processing in dragonflies than has previously been understood.

"Until now, the international research community has primarily considered the capabilities of mammals, such as humans, for investigating how animals can predict where a moving object will be in the near future," says project partner Dr Steven Wiederman from the University of Adelaide's Adelaide Medical School.

"Understandably, mammals in many ways are more complex organisms than insects, but with each discovery we're finding that dragonflies have keen visual and neural processes that could be ideal for translating into technological advances," he says.

The Swedish-Australian collaboration resulted in the discovery of brain cells (neurons) in the dragonfly Hemicordulia that enables them to predictively pursue and catch their flying prey. These neurons make it possible to focus on a small object that moves over a complex background, similarly to how humans can track and catch a ball, even when that ball is moving against the backdrop of a cheering crowd.

Professor David O'Carroll, Professor of Biology at Lund University, says: "The dragonfly neurons can make a selection of a single target from the mass of visual information that the brain receives, such as the motion of another insect, and then predict its direction and future location. The dragonfly, like humans, makes this assessment based on the path along which the object moves.

"In other words, the dragonfly does something very similar to what we do when we track a ball in motion. Despite major differences in the complexity of the brain, evolution has led to the insect using its brain for advanced visual processes that are usually only considered in mammals."

University of Adelaide PhD student Joseph Fabian and other team members were able to record target-detecting neurons in the dragonfly brain. These neurons increased their responses in a small 'focus' area just in front of the location of a moving object being tracked. If the object then disappeared from the field of vision, the focus spread forward over time, allowing the brain to predict where the target was most likely to reappear. The neuronal prediction was based on the previous path along which the prey had flown.

"This is an exciting discovery, and it aids our understanding of how single neurons make advanced predictions based on past history," Dr Wiederman says.

"Our team is convinced that these results will have practical applications, especially in the development of artificial control and vision systems, such as self-steering vehicles and bionic vision."