Newswise — MADISON, Wis. — The human gut is teeming with microbes, each interacting with one another in a mind-boggling network of positive and negative exchanges. Some produce substances that serve as food for other microbes, while others produce toxins — antibiotics — that kill their neighbors.

Scientists have been challenged trying to understand how this collection of gut microbes known as the microbiome is formed, how it changes over time and how it is affected by disturbances like antibiotics used to treat illnesses. A new study from Ophelia Venturelli, a biochemistry professor at the University of Wisconsin–Madison, and her collaborators at the University of California, Berkeley, may help alleviate some of that difficulty.

Published June 21 in the journal Molecular Systems Biology, the study provides a platform for predicting how microbial gut communities work and represents a first step toward understanding how to manipulate the properties of the gut ecosystem. This could allow scientists to, for example, design a probiotic that persists in the gut or tailor a diet to positively influence human health.

“We know very little about the ecological interactions of the gut microbiome,” Venturelli says. “Many studies have focused on cataloging all of the microbes present, which is very useful, but we wanted to try to understand the rules governing their assembly into communities, how stability is achieved, and how they respond to perturbations as well.”

By learning these rules, researchers say they can better predict interactions between microbes using computational tools instead of performing laborious and time-consuming laboratory experiments.

The data can also start to answer questions about how pathogens cause damage when they invade communities, and how to prevent it.

For the study, the researchers chose 12 bacterial types present in the human gut. They represented the diversity of the gut microbiome and the majority have been shown to significantly affect human health. They have associations with diseases such as diabetes, irritable bowel syndrome, Crohn’s disease and colon cancer.

The team collected data on what are called pairwise interactions, which means each bacterial species was paired with just one other to study how the two interacted, without worrying about what all of the others were doing. This was done for every single possible pairing in the 12-member community.

The researchers fed data about the pairwise interactions, along with data on each individual species, into a dynamic model to decipher how all of the bacteria would likely interact when combined. They found the pairwise data alone was sufficient to predict how the larger community assembles.

“This model allows us to better understand and make predictions about the gut microbiome with fewer measurements,” Venturelli explains. “We don’t need to measure every single possible community of, say, three, four or five of a set of species. We just need to measure all the pairs, which still represents a very large number, to be able to predict the dynamics of the whole gut.”

While this is still a challenge, Venturelli says it will significantly reduce the number of measurements scientists need to make.

The researchers also looked at which species seemed to be the most important in the community by measuring substances microbes produce, called metabolites. To their surprise, “the metabolite data was not able to predict the role of important species in the community,” Venturelli says.

She and the research team then tested the model’s predictive power by trying to estimate the characteristics of different combinations of their 12 chosen bacteria. Although not perfect, the model did well at predicting dynamic behaviors.

Additionally, the team found more positive interactions between microbes in the community than they expected based on other studies that have shown mostly negative interactions.

“We found there’s a balance between positive and negative interactions and the negative interactions kind of provide a stabilizing force for the community,” Venturelli says. “We are beginning to understand the design principles of stability of the gut microbes and what allows a community to recover from perturbations.”

The model allows the scientist to now begin to ask questions about the composition and dynamics of thousands of microbial communities.

“Without a model, we are basically just blindly testing things without really knowing what we are doing and what the consequences are when we are, for example, trying to design an intervention,” she says. “Having a model is a first step toward being able to manipulate the gut ecosystem in a way that can benefit human health.”

This work was supported by the Defense Advanced Research Projects Agency (DARPA) (HR0011516183). 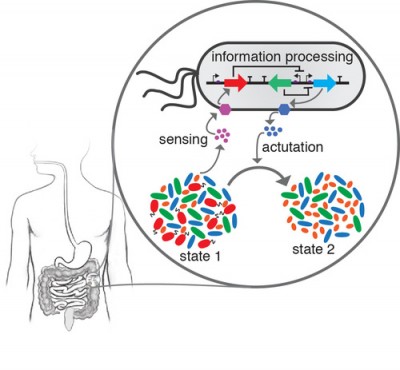 Caption: Researcher Ophelia Venturelli is trying to understand the dynamic interactions of microbes that specifically reside in the human gut because of the impact they have on human health. Understanding these interactions is the first step in being able to change the microbiome in ways that benefit health. 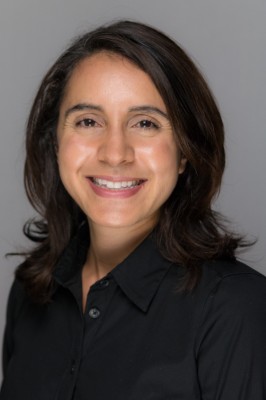 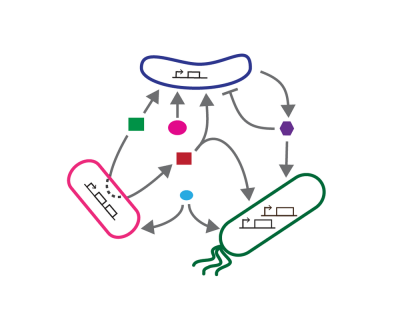 Caption: Different bacterial species are constantly interacting in both positive and negative ways. They send signals to each other as well as synthesize and degrade molecules that enhance or inhibit those around them.