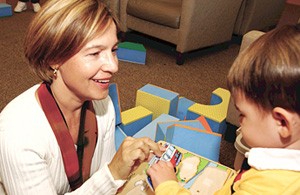 Newswise — Breakthrough research demonstrating that children with autism as young as 18 months can vastly improve their language, cognition and social skills with an early intervention developed by UC Davis Professor Sally Rogers has been replicated in a major new study.

Rogers, a professor of Psychiatry and Behavioral Sciences at the MIND Institute, began work on a novel developmental approach to autism in Denver in 1981, and in partnership with her colleague and co-author Geraldine Dawson developed an approach to improving long-term outcomes for very young children. The Early Start Denver Model has since become a method used throughout the U.S. and around the world.

But until now ESDM had not been tested in the most rigorous fashion − a multi-site randomized trial, comparing the approach with community-based autism interventions. The study, which appears today in Journal of the American Academy of Child and Adolescent Psychiatry, began in 2007 at three university sites around the country. The new research replicates an ESDM study published in 2010. Rogers emphasized that replication studies are rare and costly but critical to validate novel scientific findings.

The new study found that children receiving intensive ESDM in their homes for an average of 15 hours per week made significantly greater language gains than did children in the community interventions, and this was true for both children with more severe delays and those with less.

In addition to validating the efficacy of ESDM for language development, the study also found that children receiving services in the community settings made large gains in several areas.

“The idea that little children with autism who are getting good treatment can make this much IQ and language gain means we should expect this from quality early-intervention experiences,” Rogers said. “These findings should raise families’ hopes a whole lot.”

What distinguishes ESDM from the more traditional, behavioral interventions used with children with autism is that it combines developmental and behavioral approaches and is carried out within in everyday routines. ESDM is built on moment-to-moment interactions that young children typically have with other people, especially their parents, and uses children’s interests and favorite activities to assure that social interaction is interesting and fun.

“Unlike other approaches popular at the time that the Denver Model began, we used a typical preschool physical environment and focused on the learning opportunities that existed in social interactions between children and adults to accelerate children’s development,” Rogers said. “This was a new idea at the time.”

In 2012, TIME magazine named ESDM one of the top 10 medical breakthroughs because their work demonstrated that brain function among young children with autism can normalize with effective early intervention in profound, enduring ways.

For the current study 118 children with autism, ages 14 months to two years, were enrolled and randomly assigned to either ESDM or community interventions for 27 months. Children assigned to ESDM intervention received three months of weekly parent coaching followed by 24 months of one-on-one treatment about 15 hours per week in homes or daycare settings from supervised therapy assistants. Parents received coaching four hours monthly from a certified ESDM therapist. In the community setting, hours of treatment varied by site.

Autism treatment in the community greatly improved over time

Rogers said families with a child diagnosed with autism should take some comfort knowing that the early treatments now widely available do make a difference.

“It says the autism scores at the time of diagnosis are just a starting point,” she said. “It says that the developmental paths and learning capacity of young children with autism are more plastic than we knew, and there are many ways to get learning opportunities to them.”

This study was supported by individual Autism Speaks grants to Annette Estes and to Sally Rogers and by NIMH/NICHD award number R01 081757 as part of the Autism Centers of Excellence (ACE) Treatment Network, clinicaltrials.gov identifier NCT 00698997.

Journal of the American Academy of Child and Adolescent Psychiatry