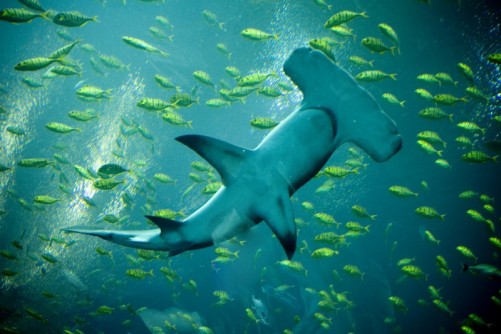 Conservationists have produced a status report and roadmap for protecting sharks and rays in the southwest Indian Ocean, one of the last remaining strongholds for these ancient creatures in the world’s oceans.

Newswise — Mauritius, April 19, 2017 –Marine experts and conservationists from the WCS (Wildlife Conservation Society), TRAFFIC, the Indian Ocean Commission (IOC), regional governments, and other groups have produced a status report and roadmap for protecting sharks and rays in the southwest Indian Ocean, one of the last remaining strongholds for these ancient creatures in the world’s oceans.

Over 30 scientists, policy makers and conservationists recently attended a regional workshop to discuss the conservation of sharks and rays in the Southwest Indian Ocean (SWIO). The workshop, facilitated by WCS and TRAFFIC, was supported by the IOC – EU funded Biodiversity Program and the Leonardo DiCaprio Foundation.

The roadmap produced at the workshop identified a large number of actions that could have tangible effects on shark and ray conservation.

“The status report and roadmap are essential steps in protecting the numerous shark and rays species that are found in the SWIO,” said Ms. Gina Bonne, Officer in charge of Environment and Climate Change programs at the IOC “The report highlights the importance of the SWIO in harboring a large number of shark and ray species, many of which are found nowhere else on earth, and also clearly identifies the threats that are likely to lead to the extinction of a number of species if rapid action is not taken.”

The region, and particularly the Mozambique Channel, is a hotspot of shark and ray biodiversity, possibly second only to the Coral Triangle in Southeast Asia. At least 211 species are currently known to be found in the region—nearly a quarter of all shark and ray species globally—56 species are endemic and it is likely that many species remain undescribed. Approximately 25 percent of known shark and ray species in the region are threatened although their status is relatively poorly known. Ecological data, data on capture and data on trade is missing or unreliable. This lack of information is one of the key obstacles to their conservation.

The main threat to sharks and rays in the region and worldwide is overfishing, either through targeted fishing for meat, fins, cartilage or oil, or as incidental catch in industrial or artisanal fisheries. This is compounded by the negative reputation of sharks and rays and the difficulty in securing widespread acceptance of the vital role these species have in functioning and healthy marine ecosystems. Other threats include habitat loss, particularly in areas close to the shore that are used as nurseries, coastal development, and climate change which is affecting critical ecosystems such as coral reefs and seagrass meadows.

The roadmap highlights the importance of improved monitoring and surveillance systems at national and regional levels, as well as increased regional coordination and sharing of expertise between countries. In many countries in the region sharks and rays have a significant socio-economic importance for artisanal and small-scale fishers, and the roadmap identifies the need to engage communities in shark and ray conservation actions both to reduce targeted and incidental catch in small-scale fisheries and to collect data on shark and ray capture through citizen science projects. Drawing on a recent analysis of the effectiveness of the global marine protected area (MPA) network in protecting sharks and rays, the report also concludes that relatively modest increases in no-take zones of MPAs and developing new transboundary MPAs as an action could have a substantial and long-term impact on shark and ray conservation in the region.

The status report and the roadmap will be presented for formal endorsement by ten governments in the region at the next Conference of Parties to the Nairobi Convention in 2018, thus allowing their adoption at the national level and their translation in to national conservation legislation and policy.

“Sharks and rays don’t recognize national boundaries, and so their conservation and management are complicated by the need for multi-country responses,” said Ms Bonne “The status report and roadmap emphasize the role governments in the region must play in terms of national monitoring systems, improved control and surveillance of industrial fishing activity, and improvements to national policy and legislation in order to make effective shark and ray conservation a reality.”

TRAFFIC, the wildlife trade monitoring network, is the leading non-governmental organization working globally on trade in wild animals and plants in the context of both biodiversity conservation and sustainable development. TRAFFIC’s mission is to ensure that trade in wild plants and animals is not a threat to the conservation of nature. TRAFFIC's vision is of a world where wildlife trade is: managed in a way that maintains healthy wildlife populations and ecosystems; contributes to meeting human needs; supports local and national economies; and helps motivate commitments to conserve wild species and habitats. Visit: traffic.org Follow: @TRAFFIC_WLTrade. For more information: +44 (0)1223 277427.

Created in 1982, the IOC is an intergovernmental organization consisting of five Member States: The Union of the Comoros, France by way of Reunion Island, Madagascar, Mauritius and the Seychelles. The IOC is the only regional organization in Africa to represent a group of islands. It defends the interests of its Member States in Africa and internationally. Thanks to over three decades of experience, with the support of a dozen international partners, the IOC has become a key sustainable development player in Africa with recognized expertise in many different areas, particularly in marine and coastal resource management. The IOC-Biodiversity project, funded by the European Union, aims at preserving and valorizing the biodiversity of Indian Ocean Islands and of Kenya and Tanzania. Visit: coi-ioc.org Follow: f @commissionoi / t @commission_io For more information: (+230) 4026100 / communication@coi-ioc.org