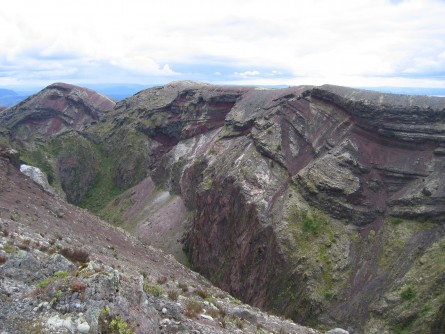 Newswise — Volcanologists are gaining a new understanding of what’s going on inside a shallow magma reservoir that lies below an active volcano and they’re finding a colder, more solid place than previously thought, according to new research published June 16 in the journal Science. It’s a new view of how volcanoes work, and could eventually help volcanologists get a better idea of when a volcano poses the most risk.

Chad Deering, an assistant professor of geology at Michigan Technological University, is one of the co-authors who helped lead field research on New Zealand's North Island. The team extracted zircon minerals from volcanic rocks around the slopes of Mt. Tarawera, deposited during the Kaharoa eruption in 1314, which is New Zealand's largest eruption in the last millennia.

"It takes a long time to build up a magma body," Deering said. "But it may not be in an eruptible state that whole time."

He adds that ongoing research shows that a lot of magma—particularly silicic magma that freezes completely into granite or reaches a melt-rich state and explodes in big eruptions—is more like mush than pure liquid. The Kaharoa zircons were in contact with liquid, and their crystals record a history of long spans of cooling with only punctuated periods of heating that leave the magma in an eruptible state.

It’s hard to study magma directly. Even at volcanic sites, it lies miles beneath the Earth’s surface and while geologists have occasionally drilled into magma by accident or design, heat and pressure destroy any instrument you could try to put into it.

Instead, Deering along with corresponding author Kari Cooper from the University of California-Davis and their colleagues study the chemical log recorded in the zircon crystals from Mt. Tarawera. The Kaharoa eruption, roughly five times the size of Mt. St Helens in 1980, brought the zircons up, which had been exposed to much of the record of temperature and chemistry changes in the magma reservoir history. Once on the surface, that record of the past was frozen in place.

The crystals are like a “black box” flight recorder for studying volcanic eruptions, Cooper said. “Instead of trying to piece together the wreckage, the crystals can tell us what was going on while they were below the surface, including the run up to an eruption.”

By studying trace components within seven zircon crystals, they could determine when the crystals first formed and how long during their life within the magma reservoir they were exposed to high heat (over 700 degrees Celsius). The crystals give information about the state of the part of the magma reservoir in which they resided.

The researchers found that all but one of the seven crystals were at least tens of thousands of years old, but had spent only a small percentage (less than about four percent) exposed to molten magma.

A Snowcone Not A Molten Lake

The picture that emerges, Cooper said, is less a seething mass of mostly liquid molten rock than something like a snowcone: mostly solid and crystalline, with a little liquid seeping through it.

To create an eruption, a certain amount of that solid, crystalline magma has to melt and mobilize, possibly by interacting with hotter liquid stored elsewhere in the reservoir. The pre-eruption magma likely draws material from different parts of the reservoir, and it happens very quickly in geological time – over decades to centuries. That implies that it may be possible to identify volcanoes that pose the highest risk of eruption by looking for those where the magma is most mobile.

Interestingly, all the crystals studied had remained unmelted in Mt. Tarawera’s magma reservoir through a gigantic eruption that occurred about 25,000 years ago, before being blown out in the smaller eruption 700 years ago. That shows that magma mobilization must be a complex process.

“To understand volcanic eruptions, we need to be able to decipher signals the volcano gives us before it erupts,” says Jennifer Wade, a program director in the National Science Foundation’s Division of Earth Sciences, which funded the research.  “This study backs up the clock to the time before an eruption, and uses signals in crystals to understand when magma goes from being stored to being mobilized for an eruption.”