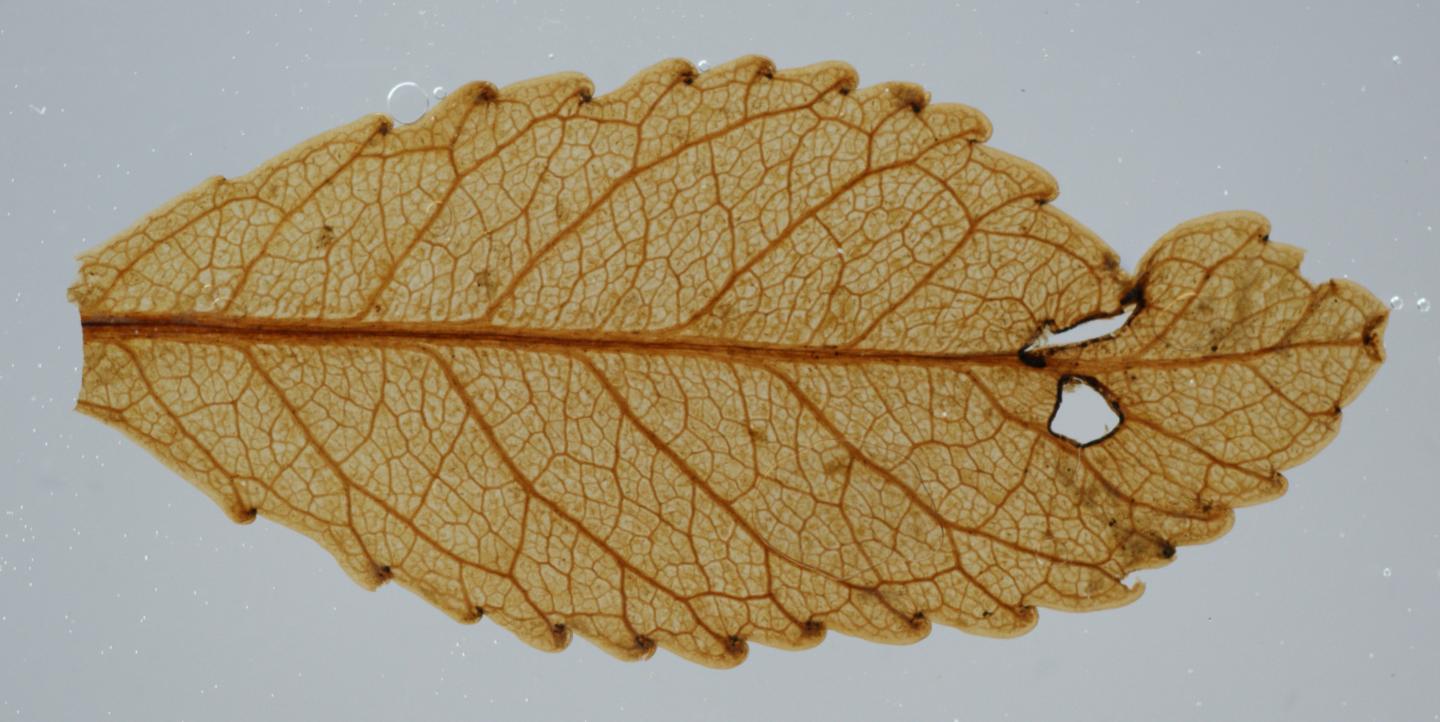 A 23-million-year-old leaf preserved in a onetime New Zealand lake bed, key to past atmospheric conditions. One can see veins, glands along the teeth, and holes gnawed by insects, with resulting stunted growth and scar tissue. 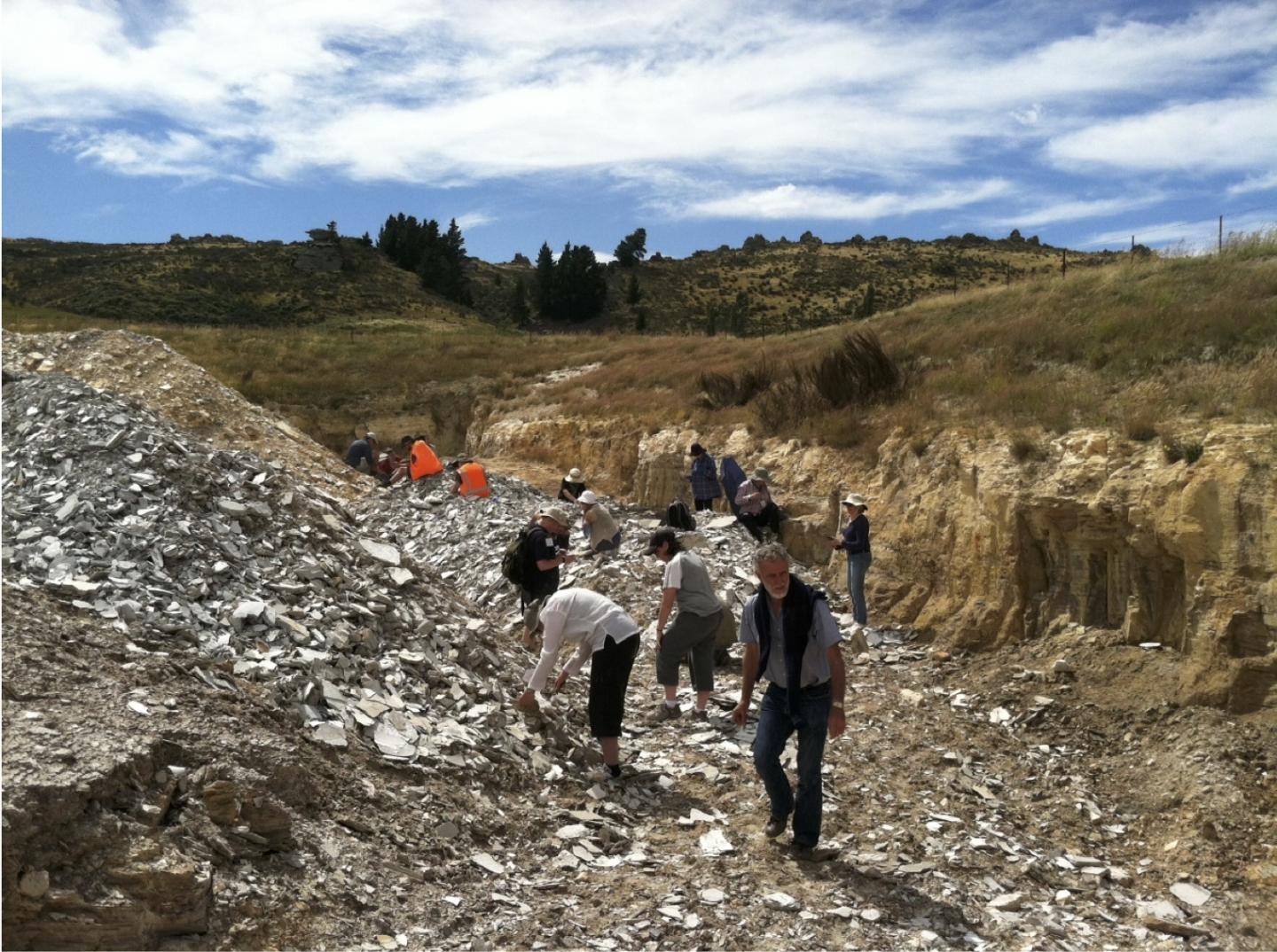 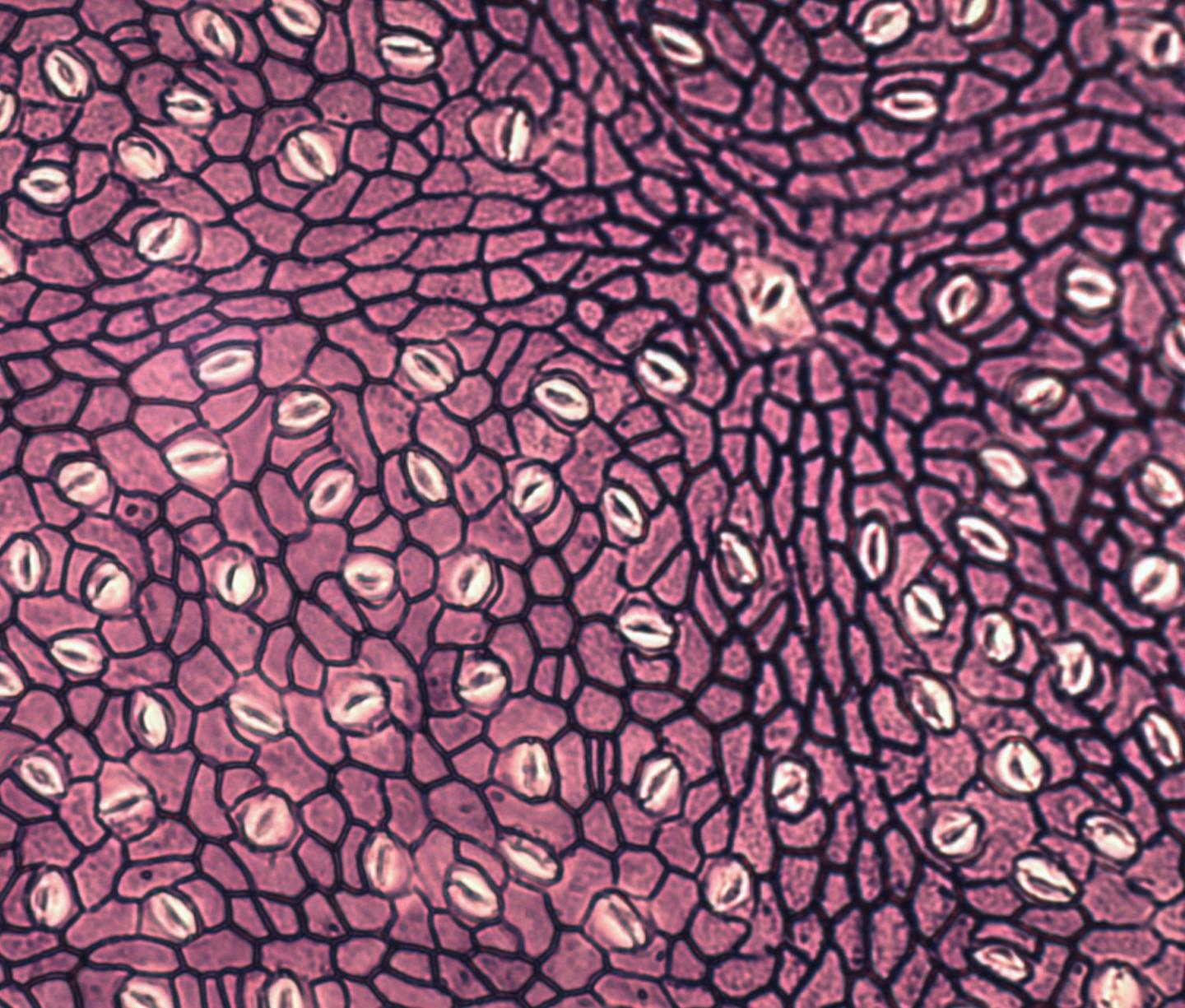 Part of a mummified leaf, highly magnified. One can make out individual epidermal cells, and mouth-shaped stomata, openings through which the leaf took in carbon dioxide and released water.

Newswise — Scientists studying leaves from a 23-million-year-old forest have for the first time linked high levels of atmospheric carbon dioxide with increased plant growth, and the hot climate off the time. The finding adds to the understanding of how rising CO2 heats the earth, and how the dynamics of plant life could shift within decades, when CO2 levels may closely mirror those of the distant past.

Scientists retrieved the leaves from a unique onetime New Zealand lake bed that holds the remains of plants, algae, spiders, beetle, flies, fungi and other living things from a warm period known as the early Miocene. Scientists have long postulated that CO2 was high then, and some plants could harvest it more efficiently for photosynthesis. This is the first study to show that those things actually happened in tandem. The findings were published this week in the journal Climate of the Past.

"The amazing thing is that these leaves are basically mummified, so we have their original chemical compositions, and can see all their fine features under a microscope," said lead author Tammo Reichgelt, an adjunct scientist at Columbia University's Lamont-Doherty Earth Observatory and assistant professor of geosciences at the University of Connecticut. "Evidence has been building that CO2 was high then, but there have been paradoxes."

The so-called "carbon fertilization effect" has vast implications. Lab and field experiments have shown that when CO2 levels rise, many plants increase their rate of photosynthesis, because they can more efficiently remove carbon from the air, and conserve water while doing so. Indeed, a 2016 study based on NASA satellite data shows a "global greening" effect mainly due to rising levels of manmade CO2 over recent decades; a quarter to a half of the planet's vegetated lands have seen increases in leaf volume on trees and plants since about 1980. The effect is expected to continue as CO2 levels rise.

This might seem like good news, but the reality is more complex. Increased CO2 absorption will not come close to compensating for what humans are pouring into the air. Not all plants can take advantage, and among those who do, the results can vary depending on temperature and availability of water or nutrients. And, there is evidence that when some major crops photosynthesize more rapidly, they absorb relatively less calcium, iron, zinc and other minerals vital for human nutrition. Because much of today's plant life evolved in a temperate, low-CO2 world, some natural and agricultural ecosystems could be upended by higher CO2 levels, along with the rising temperatures and shifts in precipitation they bring. "How it plays out is anyone's guess," said Reichgelt. "It's another layer of stress for plants. It might be great for some, and horrible for others."

The deposit is located in a small, long-extinct volcanic crater now located on a farm near the southern New Zealand city of Dunedin. The crater, about a kilometer across, once held an isolated lake where successive layers of sediments built up from the surrounding environment. The feature was recognized only within about the last 15 years; scientists dubbed it Foulden Maar. Recognizing it as a scientific gold mine, they have been studying it ever since. Some have also been fighting an actual mining company that wants to strip the deposit for livestock feed.

In the new study, the researchers took samples from a 2009 drill core that penetrated 100 meters to near the bottom of the now-dry lake bed. Larded in between whitish annual layers of silica-rich algae that bloomed each spring for 120,000 years are alternating blackish layers of organic matter that fell in during other seasons. These include countless leaves from a subtropical evergreen forest. They are preserved so perfectly that scientists can see microscopic veins and stomata, the pores by which leaves take in air and concurrently release water during photosynthesis. Unlike most fossils, the leaves also retain their original chemical compositions. It is the only such known deposit in the Southern Hemisphere, and far better preserved than the few similar ones known from the north.

The Miocene has long been a source of confusion for paleoclimate researchers. Average global temperatures are thought to have been 3 to 7 degrees C hotter than today, and ice largely disappeared at the poles. Yet many proxies, mainly derived from marine organisms, have suggested CO2 levels were only about 300 parts per million-similar to those of preindustrial human times, and not enough to account for such warming. With evidence of high CO2 elusive, scientists have speculated that previous proxy measurements must be off.

Based on the new study and a related previous one also at Foulden Maar, the researchers were able to get at this conundrum. They analyzed the carbon isotopes within leaves from a half-dozen tree species found at various levels in the deposit. This helped them zero in on the carbon content of the atmosphere at the time. They also analyzed the geometry of the leaves' stomata and other anatomical features, and compared these with modern leaves. By combining all the data into a model, they found that atmospheric CO2 was not 300ppm, but about 450-a good match for the temperature data. Second, they showed that the trees were super-efficient at sucking in carbon through the stomata, without leaking much water through the same route-a factor that all plants must account for. This allowed them to grow in marginal areas that otherwise would have been too dry for forests. The researchers say this higher efficiency was very likely mirrored in forests across the northern temperate latitudes, with their far greater landmasses.

Human emissions have now pushed CO2 levels to about 415 parts per million, and they will almost certainly reach 450 by about 2040-identical to those experienced by the Foulden Maar forest. Estimates of the resulting temperature increases over decades and centuries vary, but the new study suggests that most are in the ballpark.

"It all fits together, it all makes sense," said study coauthor William D'Andrea, a paleoclimate scientist at Lamont-Doherty. In addition to showing how plants might react directly to CO2, "this should give us more confidence about how temperatures will change with CO2 levels," he said.

Study coauthor Daphne Lee, a paleontologist at New Zealand's University of Otago, led the charge to study Foulden Maar's rich ecosystem after it came to light. More recently, she became an unexpected defender of the maar, when a company with owners in Malaysia and the United Kingdom announced plans to strip-mine the deposit for use as a feed additive for for pigs, ducks and other intensively farmed animals. With many more discoveries probably to be made, scientists were horrified, and allied themselves with locals who feared noise and dust. The Dunedin city council is now looking into buying the land to protect it.

Caption: A 23-million-year-old leaf preserved in a onetime New Zealand lake bed, key to past atmospheric conditions. One can see veins, glands along the teeth, and holes gnawed by insects, with resulting stunted growth and scar tissue.

Caption: Part of a mummified leaf, highly magnified. One can make out individual epidermal cells, and mouth-shaped stomata, openings through which the leaf took in carbon dioxide and released water.

Climate of the Past