From Urine Output to Disease, Study Sheds Light on the Importance of Hormone Quality Control 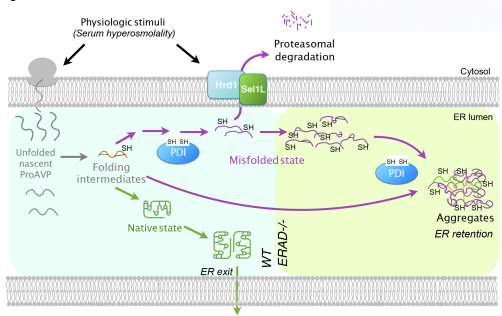 The researchers found that when the ERAD process worked normally, AVP hormone folding and secretion went well (blue). But when they turned off a key ERAD component, misfolded copies of AVP's precursor clumped with normal copies, and hormone secretion was disrupted

Newswise — ANN ARBOR, Mich. -- The discovery of a puddle of mouse urine seems like a strange scientific “eureka” moment.

However, for one team of researchers, that’s exactly what led to a new discovery.

The researchers’ findings may enhance understanding of how our bodies balance water content – 50 to 60 percent of our weight. It may also lead to better understanding of hormone-related diseases can cause conditions ranging from diabetes to obesity.

Starting from that patch of abnormally wet cage litter, the researchers traced the cause all the way into tiny nerve cells in the pituitary glands of their research mice.

Clues and experiments led them into the folds of the endoplasmic reticulum or ER, as it’s called – a microscopic structure inside every cell that you might remember from biology class.

The ER is the last stop for many items that cells send out into the world. If you think of a pituitary gland cell as a hormone factory, then the ER is both the quality control department and the packaging and shipping department for those hormones.

The team’s discovery shows that the ER quality control machine does more than just keep the cell from shipping poorly made goods, by destroying bad products before they do damage.

They show that, in addition, the ER machinery provides a safe space for the cell to put finishing touches on its products, keeping the bad ones from clumping together with the good ones.

If this safe space fails, they show, the hormone known as vasopressin can’t do a key job: helping the body balance its water levels by reclaiming water from urine.

What might one see in a mouse that lets too much water go in its urine? Perhaps an unusually wet mouse cage.

University of Michigan physiology professor Ling Qi, Ph.D., explains that the findings, published in the Journal of Clinical Investigation, illustrate a new role for a process called endoplasmic reticulum-associated degradation or ERAD.

“We know that critical events regulating hormone levels in the body happen in the ER,” he says. “We demonstrate that the machinery of the ERAD process controls the level of hormones released from cells and thereby controlling systemic water balance.”

A new role for ERAD

ERAD was already known to play a key role in identifying badly-made products, such as misfolded proteins, and breaking them down before they can leave the cell.

In fact, many genetic diseases may be resulted from overwhelming the ERAD machinery with too many mutated, misfolded proteins. Even during normal protein production, a few bad copies get made and fold inappropriately. U-M has started a Protein Folding Disease Initiative to study all of these issues.

But the team of Qi, postdoctoral fellows Guojun Shi, Ph.D., and Geun Hyang Kim, Ph.D., and undergraduate student Diane Somlo, now a Yale University medical student, and colleagues from around the world, show that ERAD can do more.

Their study centers around proAVP, a “prohormone” or the precursor of the hormone called arginine-vasopressin, or also sometimes called vasopressin or antidiuretic hormone.

They had actually set out to study what role another molecule, called Sel1L, plays in living organisms. They did not expect that Sel1L was important to water balance and the ability of proAVP to leave cells. So, they produced a mouse equipped with a drug-sensitive genetic mechanism that allowed them to turn off Sel1L production.

The human disease, which occurs in about 1 in every 25,000 people, has been known to be caused by a lack of vasopressin, or decreased ability of kidneys to respond to it.

Through painstaking research, the team showed that when ERAD didn’t happen normally, misfolded proAVP molecules didn’t get cleared, and they formed aggregates, or clumps, with normal proAVP molecules. That meant the normal hormone couldn’t get where it needed to go.

“What’s really fascinating is that ERAD appears to control secretion of AVP by degrading misfolded proteins, and allowing the good ones to go,” says Qi. “Without ERAD, the bad ones attach to the good ones which then stay in the ER. This suggests that central diabetes insipidus may develop because of problems with quality control in the ER.”

The researchers suspect that the level of water in the body may even act as a feedback loop to trigger the production of more ERAD machine. But if the ERAD machinery is broken, that extra prohormone could gum up the works further.

Perhaps targeted drugs could be found to accomplish this, says Qi, though that could be years away.

“Protein folding is critical in the pathogenesis of many diseases,” he says. “This shows how important the ERAD process is in that process. If ER stress response is a fire alarm, ERAD is the firefighters putting out the fires and preventing them from spreading to the next house.”

In addition to Qi, Shi and Kim, who are members of the Department of Molecular and Integrative Physiology at the U-M Medical School, and their U-M colleague Peter Arvan of the Department of Internal Medicine, the research team included Cristina Prescianotto-Baschong,  Nicole Beuret, Jonas Rutishauser and Martin Spiess of the University of Basel, Switzerland, Shengyi Sun of the University of Texas Southwestern Medical Center, and Qiaoming Long of Suzhou University in China.

The research used the Microscopy & Image Analysis Laboratory at the U-M Medical School, and funding from the U-M Protein Folding Diseases Initiative as well as the National Institutes of Digestive and Diabetes and Kidney Diseases (DK48280, DK111174), the Swiss National Science Foundation and the American Diabetes Association.