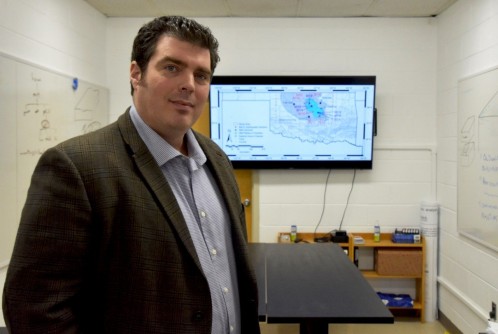 Ryan Pollyea at his Computational Geofluids Laboratory. On the screen in background is a map of Oklahoma, with clusters of earthquake events displayed.

Newswise — In a new study, Virginia Tech researchers have found that efforts to curb earthquakes triggered by the injection of oilfield wastewater into the ground in Oklahoma are not targeting the most dangerous tremblers, and that a larger reduction in injection volumes is needed.

Prior to 2011, Oklahoma averaged one magnitude 3-plus earthquake per year, but in 2015 there were more than 900 such earthquakes, making Oklahoma the most seismically active state in the mainland United States. Increased seismic activity has occurred simultaneously with the increased retrieval of unconventional oil and gas, which uses hydrofracturing, commonly referred to as fracking, to unlock previously inaccessible oil and gas resources.

This rapid proliferation of unconventional oil and gas recovery has also resulted in millions of gallons of highly brackish wastewater, which comes up with the retrieved oil and gas. To dispose of this wastewater, the liquid is re-injected into geologic formations deep underground.

Such wastewater injections have been taking place for decades, but the rapid increase in oil and gas production via fracking means substantially more oilfield wastewater is now being re-injected. In Oklahoma, the injections triggering earthquakes are taking place in the Arbuckle formation, a deep and highly porous sedimentary rock layer.

“Our results show that average annual injection well locations are a predictor of increasing earthquake activity,” said Ryan M. Pollyea, an assistant professor in the Virginia Tech College of Science, and director of the Computational Geofluids Laboratory, who spearheaded the study, published online in the journal Geology.

Earthquakes became so frequent in Oklahoma, that in April 2015, the Oklahoma Geological Survey acknowledged that wastewater injections are likely triggering earthquakes in the north-central portions of the state. In April 2016, Oklahoma Gov. Mary Fallin signed a law authorizing the Oklahoma Corporation Commission to limit injection volumes in the immediate aftermath of earthquake swarms.

“The number of magnitude 3-plus earthquakes decreased in 2016, but there were still more than 600 earthquakes, far above the historical average,” said Pollyea, who specializes in groundwater modeling and simulation. “Previous research in this area used seismological and groundwater water modeling methods, but we thought that geospatial analysis might help us understand the situation on the ground.”

“When we compared the spatial correlation using datasets that include only magnitude 3-plus earthquakes, there was no change,” said Pollyea, adding that a larger reduction in wastewater injection volumes is needed to reduce the dangers of large magnitude earthquakes.

Pollyea and his team caution that while earthquakes cannot be predicted, the study indicates that geologists can test hypothetical wastewater injection scenarios before wells come online to estimate potential impact on earthquake activity.

“This study differs from and complements other studies on wastewater injection induced seismicity,” said Shemin Ge, professor and chair of the Department of Geological Sciences at University of Colorado. (Ge was not involved with the study.) “Applying a geospatial approach, Pollyea and colleagues examined the linkage between spatially averaged injection data and seismicity occurrence. They offer a wider-angle view of the linkage at a spatial scale that is large than previously thought. Advocating reducing injection volume over time, this study offers new insights into the rationale for a continuing call for reducing injection rate in order to reduce seismicity.”

The new study is part of a larger effort that Pollyea and his collaborators are pursuing to study fluid-triggered earthquakes and wastewater injection volume and their relation to population centers in Oklahoma, building codes, policy decisions, and industry regulations.