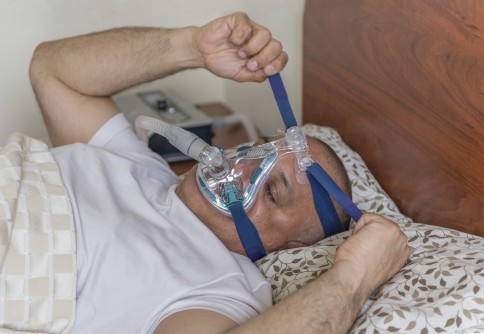 Newswise — July 18, 2017─People who carry a genetic susceptibility to Alzheimer’s disease appear to be at greater risk of diminished cognition from sleep-disordered breathing than those without the susceptibility, according to new research published online, ahead of print in the Annals of the American Thoracic Society.

In “Greater Cognitive Deficits with Sleep-Disordered Breathing among Individuals with Genetic Susceptibility to Alzheimer’s Disease: The Multi-Ethnic Study of Atherosclerosis,” researchers report that study participants carrying the apolipoprotein ε-4 (APOE-ε4) allele showed greater cognitive deficits with the various indices of sleep-disordered breathing compared to those without the allele.

APOE is a major cholesterol carrier that supports injury repair in the brain. Other studies have shown that those carrying the alternate form of the gene, ε4 allele, are at increased risk of Alzheimer’s disease. Estimates are that 20 percent of the population carries the ε4 allele.

The authors analyzed data from 1,752 participants (average age 68) in the Multi-Ethnic Study of Atherosclerosis (MESA) who underwent an in-home polysomnography (sleep) study, completed standardized sleep questions, and a battery of tests to measure their cognition.  The authors defined sleep-disordered breathing as an apnea-hypopnea index (AHI), which measures the number of stopped or shallow breaths per hour, as AHI > 15, and sleep apnea syndrome as AHI > 5 (below 5 is normal) plus self-reported sleepiness (based on a standardized scale).

Dr. Johnson said that, overall, the effects of the various sleep factors they measured on cognition were small, but in the range previously reported for several other lifestyle and health risk factors for dementia. Screening and treating sleep-disordered breathing, she added, may help reduce a person’s risk of dementia, especially if that individual carries APOE-ε4.

The Multi-Ethnic Study of Atherosclerosis was funded by the National Heart, Lung, and Blood Institute, which also funded various aspects of the current study.

About the Annals of the American Thoracic Society (AnnalsATS)

The AnnalsATS is a peer-reviewed journal published by the American Thoracic Society. The journal delivers up-to-date and authoritative coverage of adult and pediatric pulmonary and respiratory sleep medicine and adult critical care. The scope of the journal encompasses content that is applicable to clinical practice, the formative and continuing education of clinical specialists and the advancement of public health. Editor: David Lederer, M.D., M.S., associate professor of medicine and epidemiology and associate division chief for clinical and translational research at Columbia University.

nnals of the American Thoracic Society