Gigantic Crocodile with T. Rex Teeth Was a Top Land Predator of the Jurassic in Madagascar

Paleontologists document the features of a giant crocodile relative - the largest and oldest known “notosuchian”, predating the other forms by 42 million years. 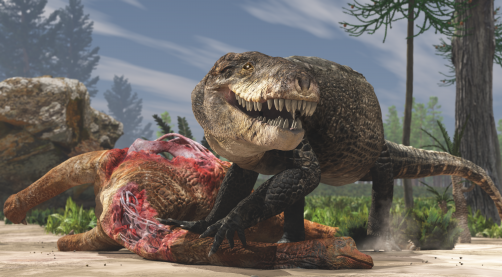 Paleoartistic restoration of Razanandrongobe sakalavae scavenging on a sauropod carcass in the Middle Jurassic of Madagascar. Unlike extant crocodilians, this terrestrial predator had a deep skull and walked on erect limbs. 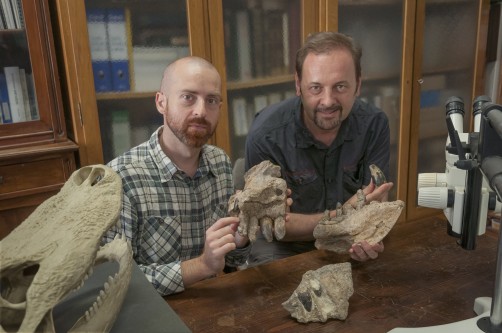 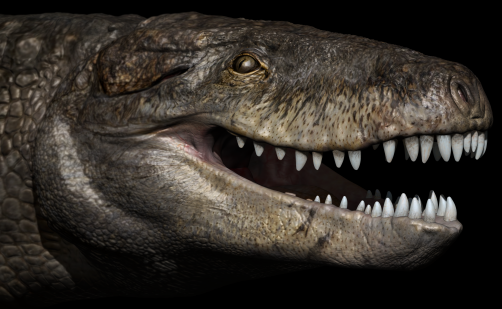 Paleoartistic restoration of the head of Razanandrongobe sakalavae. Unlike extant crocodilians, this terrestrial predator had a deep skull.

Newswise — Little is known about the origin and early evolution of the Notosuchia, hitherto unknown in the Jurassic period. New research on fossils from Madagascar, published in the peer-reviewed journal PeerJ by Italian and French paleontologists, begin to fill the gap in a million-year-long ghost lineage.

Deep and massive jaw bones armed with enormous serrated teeth that are similar in size and shape to those of a T-rex strongly suggest that these animals fed also on hard tissue such as bone and tendon. The full name of the predatory crocodyliform (nicknamed ‘Razana’) is Razanandrongobe sakalavae, which means “giant lizard ancestor from Sakalava region”.

A combination of anatomical features clearly identify this taxon as a Jurassic notosuchian, close to the South American baurusuchids and sebecids, that were highly specialized predators of terrestrial habits, different from present-day crocodilians in having a deep skull and powerful erect limbs. “Like these and other gigantic crocs from the Cretaceous, ‘Razana’ could outcompete even theropod dinosaurs, at the top of the food chain”, says Cristiano Dal Sasso, of the Natural History Museum of Milan.

Razanandrongobe sakalavae is by far the oldest - and possibly the largest - representative of the Notosuchia, documenting one of the earliest events of exacerbated increase in body size along the evolutionary history of the group.

“Its geographic position during the period when Madagascar was separating from other landmasses is strongly suggestive of an endemic lineage. At the same time, it represents a further signal that the Notosuchia originated in southern Gondwana”, remarks co-author Simone Maganuco.

PDF of this Press Release: http://static.peerj.com/pressReleases/2017/07/Press-Release-Dal-Sasso.pdf

Link to the Published Version of the article (quote this link in your story – the link will ONLY work after the embargo lifts): https://peerj.com/articles/3481 your readers will be able to freely access this article at this URL.

PeerJ is an Open Access publisher of two peer-reviewed journals and a preprint server. PeerJ is based in San Diego, CA and the UK and can be accessed at https://peerj.com/. PeerJ’s mission is to help the world efficiently publish its knowledge.  All works published in PeerJ are Open Access and published using a Creative Commons license (CC-BY 4.0). Everything is immediately available—to read, download, redistribute, include in databases and otherwise use—without cost to anyone, anywhere, subject only to the condition that the original authors and source are properly attributed.  PeerJ has an Editorial Board of over 1,600 respected academics, including 5 Nobel Laureates. PeerJ was the recipient of the 2013 ALPSP Award for Publishing Innovation. PeerJ Media Resources (including logos) can be found at: https://peerj.com/about/press/