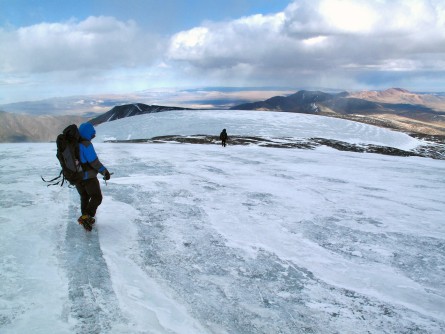 The Gobi-Altai mountain range in western Mongolia is in a very dry region but ice can accumulate on mountaintops, such as Sutai Mountain, the tallest peak in the range. In the picture, friends of Jigjidsurengiin Batbaatar descend this mountain after helping to install a weather station. 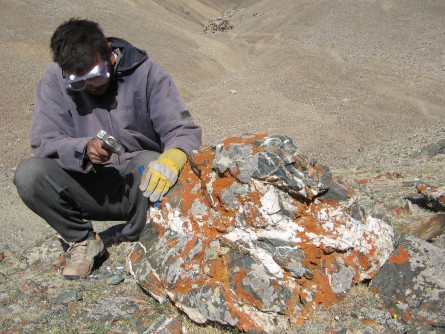 Jigjidsurengiin Batbaatar chisels rock from the surface of a boulder dropped by a glacier in the Gobi-Altai range in Mongolia. The elemental traces of exposure to cosmic rays show that this glacier reached its maximum size 7,500 years ago, much later than the last ice age.

At a moraine, a band of boulders left by a retreating glacier, co-author Ari Matmon collects rock samples with his son. This site is in the Khangai Mountains in Mongolia.

Newswise — The simple story says that during the last ice age, temperatures were colder and ice sheets expanded around the planet. That may hold true for most of Europe and North America, but new research from the University of Washington tells a different story in the high-altitude, desert climates of Mongolia.

The recent paper in Quaternary Science Reviews is the first to date ancient glaciers in the high mountains of Mongolia's Gobi Desert. It compares them with glacial records from nearby mountains to reveal how glaciers behave in extreme climates.

On some of the Gobi mountain ranges included in the study, glaciers started growing thousands of years after the last ice age ended. In contrast, in slightly wetter parts of Mongolia the largest glaciers did date from the ice age but reached their maximum lengths tens of thousands of years earlier in the glacial period rather than at its culmination, around 20,000 years ago, when glaciers around most of the planet peaked.

Both trends differ from the typical chronology of glacier growth during an ice age.

"In some of the Gobi mountains, the largest glaciers didn't happen during the last ice age," said first author Jigjidsurengiin Batbaatar, a UW doctoral student in Earth and Space Sciences. "Some of these glaciers were starving for precipitation then. Our measurements show that they actually shrank as cold, dry conditions of the ice age became more intense. Then they grew when the warming climate of the Holocene brought more moist air, feeding the glaciers with more snow."

Batbaatar and co-author Alan Gillespie, a UW research professor emeritus in Earth and Space Sciences, collected samples from moraines, which are long ridges of rocky debris dropped at a glacier's edge. They used a dating technique perfected in the last 20 years that measures elemental changes in the rock that occur when the rock gets bombarded by cosmic rays after the glacier's retreat.

"We were expecting to find rocks exposed for 20,000 years, the date of the peak of the last ice age, but these moraines were much younger. That means that these glaciers were smaller when the climate was the coldest," Batbaatar said. "The results were so surprising that we went back to double check."

The study was possible both because of advances in the cosmic-ray dating method, and political changes that allow more access to Central Asia.

"After the fall of the Soviet Union, Russia opened up, China opened up, and Mongolia opened up to Western researchers with these novel dating techniques. And we see a very different pattern of glacial advances compared to North America and Europe," Batbaatar said.

The data collected in 2007 and 2010 confirm a theoretical study by Summer Rupper, a former UW doctoral student now at the University of Utah, and UW faculty member Gerard Roe. In very cold and dry environments, where rain and snow are scarce, it predicted that temperature would not always be the main factor driving a glacier's growth.

"Because the melting is so dominant a process, and the melting is mostly controlled by temperature, people think of glaciers as thermometers. But we all know that precipitation plays a role," Batbaatar said.

The new study confirms that so-called "starving glaciers" in dry, high-altitude environments are indeed controlled by precipitation. They grow so slowly that they seldom reach the lower altitudes where melting is possible. Instead, they shrink when sunlight hits the surface and transforms ice into water vapor, a process called sublimation. These glaciers are thus less sensitive to temperature shifts, but very sensitive to precipitation amounts.

"Generally, people have assumed from well-documented North American and European records that the largest glaciers should have come in the peak of the last ice age," Batbaatar said. "But in Mongolia, our results show that this was not the case. Glacier behavior there was different from the better-studied areas of the Alps or the Sierra Nevada in the U.S. Even within Mongolia we observe very different behavior from range to range."

The conditions at the Gobi-Altai mountain range are extreme, with precipitation at the five research sites Batbaatar established there ranging from roughly 50 to 300 millimeters (2 inches to 1 foot) per year. Nearby mountains in Mongolia with more precipitation have more typically behaving glaciers. But other extreme climates, for example the driest parts of Tibet or the Andes, can produce glaciers with similar paradoxical trends.

"Even in this current warming climate, some mountains are so high that the temperatures are still below freezing, and the warming ocean may provide more precipitation to drive some of the glaciers to advance," Batbaatar said.

He is now working to interpret more measurements collected from a wider geographic area in Central Asia.

"Batbaatar has shown that glaciers growing in cold, arid, desert mountains may be out of sync with those in wetter, warmer environments such as the Alps," Gillespie said. "His findings move us toward a more complete understanding of how glaciers advance and retreat in response to climatic fluctuations."

The research was funded by the UW Department of Earth & Space Sciences, the UW's Quaternary Research Center, Mongolia's Damdin Da Fund and the Don J. Easterbrook Distinguished Scientist Award. Other co-authors are David Fink and Toshiyuki Fujioka at the Australian Nuclear Science and Technology Organisation, and Ari Matmon at the Hebrew University of Jerusalem.