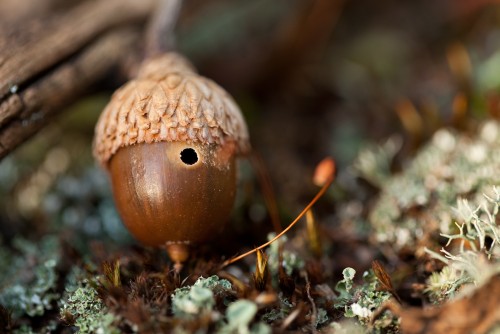 Paradoxically the predations of tiny plant enemies may be responsible for global biodiversity gradients. Shown here, exit hole drilled in a black oak acorn by an insect that lays its egg on the developing flowers and hatches inside the acorn. Shot at the Tyson ForestGEO plot in Eureka, Missouri. 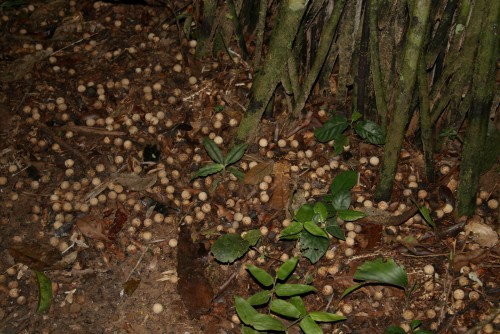 New analysis is based on the observation that seeds and seedlings do better away from their parents and clumps of their fellows. Shown here, Palm seeds on the forest floor at Los Amigos Biological Station in Peru. 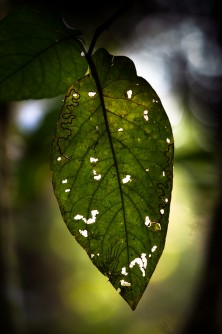 It isn't easy being green. Leaf herbivory in the Tintaya forest plot in Madidi, Bolivia. 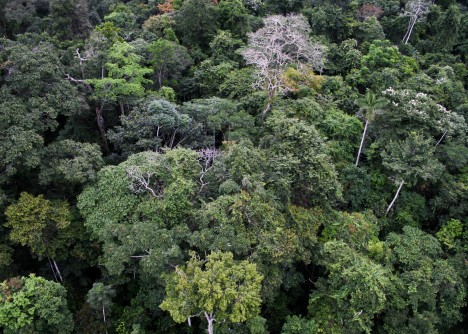 Newswise — If aliens sent an exploratory mission to Earth, one of the first things they'd notice — after the fluffy white clouds and blue oceans of our water world — would be the way vegetation grades from exuberance at the equator through moderation at mid-latitudes toward monotony at higher ones. We all learn about this biodiversity gradient in school, but why does it exist?

Even Charles Darwin wondered. Though the pattern is striking, it is difficult to explain. Since it is global in scale, the initial tendency was to suspect long-term or large-scale mechanisms, such as climate stability (no glaciers in the tropics), rates of speciation (higher in the tropics) or rates of extinction (lower in the tropics according to the fossil record).

In 1970 and 1971, two ecologists independently proposed a radically different mechanism, one that operates at scales not of kilometers but of meters. Daniel Janzen and Joseph Connell suggested that host-specific natural enemies which kill seeds and seedlings clumped near parent trees might keep locally common species from dominating a forest and give locally rare species space to flourish.

The Janzen-Connell hypothesis is now nearly 50 years old, but it has been hard to evaluate, especially at the global scale. Few studies have explicitly looked at the connection between self suppression and species diversity, and no study has looked at this relationship across temperate and tropical latitudes.

A year ago, however, Jonathan Myers, an assistant professor of biology at Washington University in St. Louis,  and Joe LaManna, a postdoctoral research associate at Washington University’s Tyson Research Center, proposed a test of the Janzen-Connell hypothesis to the principal investigators of an international network of long-term forest dynamics research sites called the Smithsonian Center for Tropical Forest Science-Forest Global Earth Observatory (CTFS-ForestGEO).

Over the next year, LaManna analyzed the data from 24 research plots, including one at Washington University's Tyson Research Center. Together these plots are home to more than 3,000 tree species and roughly 2.4 million trees. The analysis provided the first evidence that the Janzen-Connell effect contributes to the biodiversity gradient across tropical and temperate latitudes. The  paper, which has 50 authors from 12 countries, was published in the June 30, 2017, issue of the journal Science.

"This is the first time we've had the data to do this kind of in-depth analysis and to look across temperate and tropical latitudes," said LaManna, who is the corresponding author on the paper.

The analysis also provided a delicious twist on the hypothesis, namely that the plant predators that kill rare species may also keep them from going extinct. "When species get too rare, their enemies also thin out, and they have what is known as a rare species advantage," Myers said. So the specialized predators ultimately stabilize rare species instead of wiping them out.

"We were able to show for the first time that this stabilizing effect may be stronger for rare species in the tropics; this may explain why rainforests harbor so many rare trees," LaManna said.

The scientists emphasize that what they see in the data is the signature of the Janzen-Connell mechanism but that the data are agnostic about the mechanism itself. In other words, it doesn't point a finger at particular plant enemies.

The mechanism requires that the enemies be host specific rather than generalists, however. "That means the FBI (fungus, bacteria and invertebrates)," LaManna said, "the very tiny organisms that are evolving rapidly and are more likely to be host-specific."

These pathogens are everywhere even though they usually escape our notice. Scientists at the University of Missouri-Saint Louis who worked at the Tyson Research Center discovered more than 100 different species of insect herbivores that feed just on the adults of white oak, Myers said.

Both scientists mention the work of Scott Mangan, an assistant professor in the department of biology at Washington University and a co-author on the paper. Mangan has done both greenhouse and field experiments (on Panama's Barro Colorado Island) showing that soil pathogens alone — disregarding nutrients, insects, mammals or above-ground diseases — suppress the growth of seedlings strongly enough to explain the maintenance of biodiversity.

But other studies have documented suppression by other enemies, so the question of mechanism remains open.

Close relatives make bad neighbors The key observation on which the Janzen-Connell hypothesis is based is that seedfall is heaviest under a parent tree but the young tend to do better away from their parent.

The new study exposed two key aspects of self suppression. "We find that self suppression is on average stronger in a tropical forest than a temperate one," Myers said, "and that it changes systematically with latitude. This is big result number one."

Two aspects of the CTFS-ForestGEO network gave the data the necessary power, Myers said. One is that the forest plots are large enough that they contain decent numbers of rare species, the other is that all of the trees in the plots have been tagged, mapped, measured and identified down to a small size class. "No other globally coordinated forest plot network combines large plots with censuses that go down to 1-centimeter in diameter," he said.

"How can you pack more than a thousand species in a 50-hectare plot in the tropics if the rare species are being negatively impacted by these specialized enemies?" Myers asks. "You'd think that if these species are rare they'd be more likely to go extinct, so what maintains them in the system?"

The answer is their enemies. "Paradoxically, enemies can be beneficial," LaManna said. "Yes, they kill, but by killing they prevent population booms and busts. If you have no enemies, you're going to have exponential population growth followed by a crash. If you add an enemy that tracks abundance, over time the population stabilizes. It's never going to become large, but the flip side is it's never going to crash. And so these enemies are a stabilizing force."

Darwin might have savored the ironies here. Tiny organisms that live and die within a few square meters establish patterns that cover ten thousand kilometers. And organisms that kill trees also are their benefactors and prevent them from blinking out entirely.

This work was carried out during the 2016 CTFS-ForestGEO Workshop in Hainan, China, supported by National Science Foundation (NSF) grant DEB-1545761. It was also supported by NSF grants DEB 1256788, DEB 1557094,  and DEB 1257989. The data used in the primary analyses will be available at the Smithsonian Institution’s CTFS-ForestGEO database portal: http://www.forestgeo.si.edu/group/Data/Access+the+data.