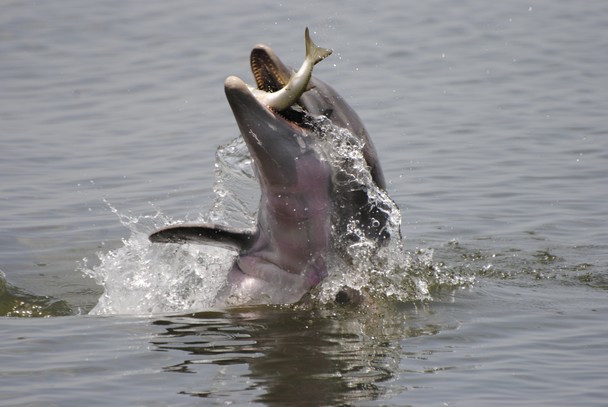 Bottlenose dolphins in the Indian River Lagoon along the southeast coast of Florida. 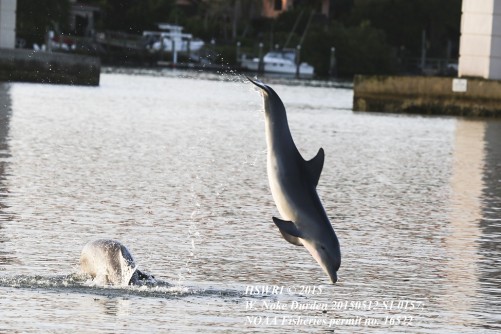 For the study, the researchers attached satellite tags on the lower third of the trailing edge of the dorsal fin of four male dolphins, aged 6 to 21 years. 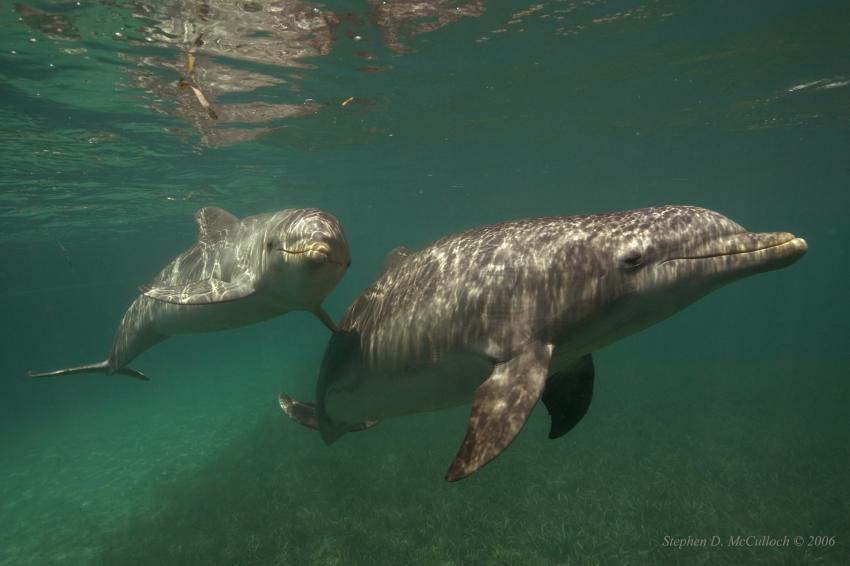 A bottlenose dolphin in the Indian River Lagoon along the southeast coast of Florida.

Newswise — More than 1,000 bottlenose dolphins live in the Indian River Lagoon year-round. This estuarine system along the southeast coast of Florida is a narrow and convoluted ecosystem with interconnected bodies of water, a handful of ocean inlets, and numerous small rivers, creeks and canals that release freshwater into the lagoon. While this population of dolphins in the lagoon has been studied extensively, what they do at nighttime is still a mystery.

Researchers from Florida Atlantic University’s Harbor Branch Oceanographic Institute in collaboration with Seven Degrees of Mapping LLC, and Hubbs-SeaWorld Research Institute, are the first to use satellite telemetry on this dolphin population, providing unique insights into their behavioral ecology during the overnight hours. Detailed information about their nocturnal movements and habitat use will give scientists a more complete ecological understanding of this population. These dolphins face many direct and indirect threats including boat strikes, entanglements, and environmental contamination.

Results of the study, published in the journal Animal Biotelemetry, provide the first documentation of Indian River Lagoon dolphins regularly leaving the brackish waters of the estuarine system and, not only traveling into the ocean, but swimming substantial distances – up to 20 kilometers – up freshwater rivers, creeks, and canals. These journeys do not appear to be extended stays in freshwater, which can be detrimental to dolphin health, but instead involve many brief trips upriver. Findings reveal that they have a larger range that encompasses more habitats than previously thought.

The study also highlights how much variation occurs within a population – researchers found individual differences with almost every aspect studied in these dolphins. Individual spatial use varied by dolphin, with home ranges and core areas of different sizes spaced throughout the southern region of the lagoon. Researchers also discovered extensive individual variation in niche preferences.

“There are many possible reasons for the difference in space use and movement patterns, including prey preference and distribution such as traveling between nearby hotspots versus long distances between food sources or the size or age of the dolphins,” said Greg O’Corry-Crowe, Ph.D., project lead and a research professor at FAU’s Harbor Branch. “For example, two of the dolphins in our study were smaller and younger, while the other two were larger and older. The differences we observed could also be linked to more complex aspects that are influenced by social factors, differences in predator avoidance strategies, and individual response to human disturbance.”

One of the areas showing less variation was inlet use. Three out of four dolphins exhibited a strong nocturnal preference for habitats close to inlets, with one individual regularly using multiple inlets. Inlets may be important nocturnal foraging habitats as well as corridors for movement between ecosystems.

Satellite telemetry is a powerful research tool that tracks the movement of an animal using orbiting satellites that detect signals emitted from a transmitter attached to the animal. For the study, the researchers attached satellite tags (SPOT 100 tags, Wildlife Computers) on the lower third of the trailing edge of the dorsal fin of four male dolphins, aged 6 to 21 years. The satellite tags recorded location data via the Argos satellite system. The tags were set to transmit constantly until 250 transmissions were reached in each 24-hour cycle. Satellite tags remained active between 129 and 140 days.

The research was conducted under National Marine Fisheries Service Scientific Research Permit Nos. 998-1678 and 14352. Funding for this project was provided from proceeds of both the Protect Wild Dolphins and Discover Florida’s Oceans specialty license plates with support from the SeaWorld and Busch Gardens Conservation Fund.

Hubbs-SeaWorld Research Institute was founded in 1963 to conduct research in the tradition of world-renowned scientists Dr. Carl L. and Laura C. Hubbs. Since the beginning, the Institute’s scientists have been dedicated to addressing the complex conservation challenges facing our oceans and coasts. Institute scientists seek effective solutions that protect and conserve marine animals and habitats while balancing the needs of humans and their reliance on marine resources. In 2013, HSWRI celebrated 50 years of its mission "to return to the sea some measure of the benefits derived from it." Additional information about the Institute can be found at www.hswri.org. As an independent nonprofit organization, Hubbs-SeaWorld Research Institute is dependent upon the benevolence of individuals and businesses to grow and sustain our primary mission programs at the highest levels possible. Donation opportunities can be found at https://hswri.org/donate/

Caption: Bottlenose dolphins in the Indian River Lagoon along the southeast coast of Florida.

Caption: A bottlenose dolphin in the Indian River Lagoon along the southeast coast of Florida.