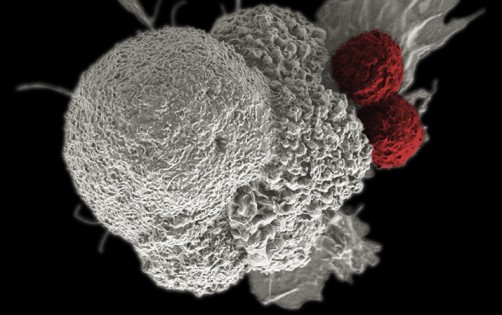 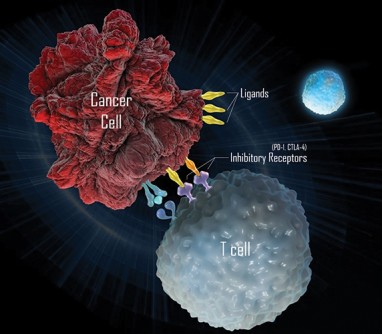 Immunotherapies can use antibodies against inhibitory receptors on T cells. 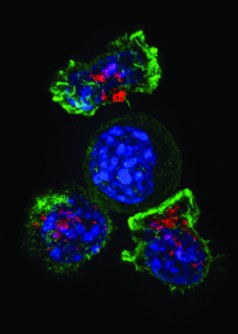 A group of T cells (green and red) surround a cancercell (blue, center).

Newswise — In the late 1800s, William B. Coley created a concoction out of bacteria and injected it into cancer patients. The first patient treated with what became known as “Coley’s Toxins” — a 21-year-old man with an inoperable tumor — was cured of his cancer. Though that might not have been the very first foray into immunotherapy as cancer treatment, it certainly was one of the earliest. Coley spent decades studying how bacterial infections affected cancers, earning him the moniker of the “father of immunotherapy.” Since then, the field has come a long way.

But why has immunotherapy suddenly become such a darling of cancer research and its funders?

The answer lies in its potential to be a broadly used and durable treatment.

Almost all cells in the body carry the same DNA and are capable of performing every cellular function. But they don’t. Intricate mechanisms regulate cells to ensure each performs only its assigned function.

But cancer cells are shifty. Tough to target, they can activate mechanisms beyond their original function. This way, they can avoid the processes that normally keep them in check.

In a process called immune evasion, cancer cells can hijack the cellular mechanisms of immune tolerance and immune exhaustion. In these mechanisms, the body’s T cells learn to recognize the types of signals they should respond to and those they should overlook. Inhibitory receptors on the surface of T cells are a part of immune tolerance and exhaustion. When one T cell wants to let another know it shouldn’t be attacked, it displays ligands on its surface that are recognized by the inhibitory receptors of the T cell. When they see these ligands, the T cells put on the brakes.

When this target is on a cancer cell, the cancer is free to continue living and growing inside the body, avoiding the surveillance of the immune system and achieving immune evasion.

Immunotherapy aims to counter the tricks cancers use to persist in the body. For example, Herceptin, an antibody that targets a disease-specific pathway in certain breast cancers, is a form of immunotherapy.

Other cell-based immunotherapies, like engineered T cells, allow scientists manually to construct cells that can target each patient’s specific cancer. These types of therapies have the potential to treat many patients but are limited by current technologies and the cost.

Enter a focus on therapies that work against immune checkpoint molecules. These agents, which could have treatment potential for a number of diseases, are antibodies designed to release the brakes on the broken immune-tolerance system of which cancer cells often take advantage. The antibodies interfere with the interactions of inhibitory receptors on T cells and their corresponding ligands, effectively alleviating the block that keeps the T cells from responding.

These antibodies work against specific inhibitory receptors on T cells called PD-1 (or its associated binding partner, PDL-1) and CTLA-4. First made popular in clinical trials for the treatment of melanoma, these antibodies over the past few years have been used to treat many other cancer types, and the patient recovery data have been striking. Patients have responded with long-lasting results in some cancers, including those cancers resistant to other treatments, such as Merkel cell carcinoma, melanoma and non-small cell lung cancer.

The reason for the antibodies’ generalizability is simple: PD-1 and CTLA-4 are molecules every person has within his or her body. They aren’t individualized therapies like many of the cell-based vaccine strategies that require tailoring in the lab.

“What’s exciting about this is it doesn’t involve cell therapies,” says Melody Swartz at the University of Chicago. “It’s just something you inject; it’s just an antibody.”

Which brings up a critical point with these types of treatments: Researchers are unleashing the body’s own exquisitely specific response against cancer.

Unfortunately, though they are potentially generalizable, the strategies currently work in only a subset of patients. Paul Nghiem at the University of Washington Medical School and the Fred Hutchison Cancer Research Center points out that while early results may be encouraging, the therapies targeting PD-1 and CTLA-4 are “dumb.” He explains, “We’re really just releasing the brakes on this smart system, and we’re not smart enough to understand what the system is seeing yet.”

In cases where patients don’t see lasting improvements with PD-1 and CTLA-4-based treatments, researchers believe it’s likely that they haven’t formed a significant response to their own cancer before the treatments are administered or their cancer has found an alternate method of side-stepping immune regulation. Determining which patients will respond to these therapies and which will not is an ongoing area of investigation.

Research topics go in and out of fashion. One day everyone is shouting about stem cells, and the next they are excited about the microbiome. Some believe that immunotherapy has the potential to stay in the spotlight.

To Nghiem, immunotherapy’s staying power can be found in the results of numerous clinical trials. Like the important cancer strategies that came before it — surgery, radiation and chemotherapy — it will stick around in an oncologist’s treatment repertoire because it does work for many people. “I believe — and I’m certainly not alone — that this is now absolutely clearly planted as one of our pillars of therapy for cancer,” says Nghiem.

David Kaufman, executive director of oncology clinical research for Merck Research Laboratories, agrees. “For patients who do have a response to immunotherapy, the benefit is extremely durable,” he says. “We haven’t seen that kind of durability of response with the vast majority of other anti-cancer agents out there.”

Indeed, immunotherapies — and especially those targeting the immune checkpoint blockades — offer some of the most generally applicable treatments seen in cancer therapy in a while. Cancer types in which the immunotherapy Merck drug Keytruda (an anti-PD-1 antibody) has shown clinical promise are in the double digits, says Kaufman. That number likely will increase as more clinical trials emerge.

Read the rest of the article here 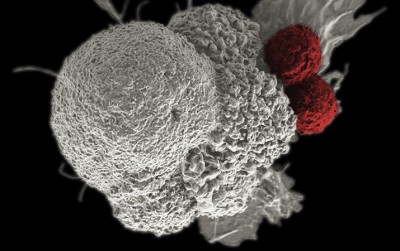 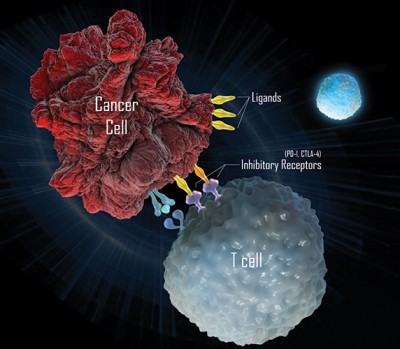 Caption: Immunotherapies can use antibodies against inhibitory receptors on T cells. 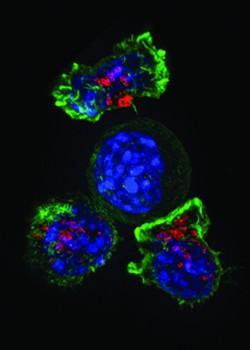