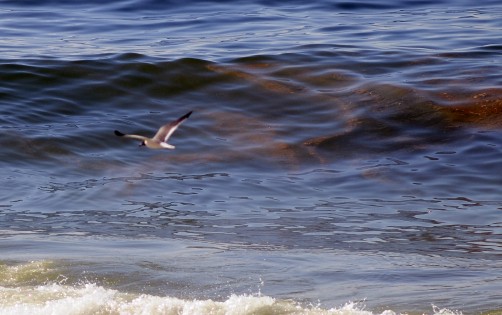 View of the Gulf of Mexico following the Deepwater Horizon Oil Spill.

Newswise — BIRMINGHAM, Ala. – The worst oil spill in U.S. history occurred when the Deepwater Horizon oil rig exploded in the Gulf of Mexico on April 20, 2010, killing 11 people and damaging a wellhead that led to 4.9 million barrels of oil leaking into the ocean. In the aftermath of this event, one potential hazard was the safety of eating seafood caught from the affected area.

An environmental health science expert in the University of Alabama at Birmingham School of Public Health worked with colleagues to analyze concentrations of contaminants in fish that were harvested by reef fishermen in the Gulf a year after the Deepwater Horizon blowout. The results are published online in the Environmental Science & Technology journal.

A total of 92 fish samples were obtained from areas open to ﬁshing — primarily near Florida and Texas, as well as some near Louisiana — by members of the Gulf of Mexico Reef Fish Shareholders’ Alliance during the period of March 2011 to April 2012. The samples were tested for benzo[a]pyrene-equivalents (BaPEs) — a combined measure of carcinogenic potency across seven polycyclic aromatic hydrocarbons (PAHs), which occur in significant amounts in oil deposits.

The sensitivity of the chemical analysis was based on levels that would be of health concern, and only one yellowedge grouper and one gag grouper sample had detectable BaPE; but the samples were still below the level of concern for ﬁnﬁsh set by the National Oceanic and Atmospheric Administration and the U.S. Food and Drug Administration.

“Levels were consistently low — below the level of concern established by the government after Deepwater Horizon,” explained study author Julia Gohlke, Ph.D. “These results suggest there is not a health concern associated with reef fish caught in the Gulf of Mexico, based on our current knowledge of the exposure levels and toxicity associated with the contaminants analyzed.”