22-Aug-2022 11:10 AM EDT, by The Alliance of Biodiversity International and the International Center for Tropical Agriculture (CIAT)
favorite_border 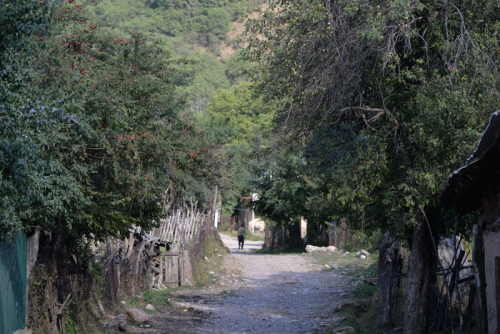 Newswise — Apple, apricot, walnut, pear and plum – some of the most widely consumed temperate fruit and nuts globally – find their origins in the forests of Central Asia. Because of their value for home consumption and sale, they are also grown in the home gardens that rural inhabitants plant and nurture near their homesteads.

Research on home gardens has shown the critical roles these play in the livelihoods and sustenance of rural dwellers worldwide, but little scholarly attention has focused on home gardens in Central Asia, particularly in the English language literature.

In a new paper, “Home gardens of Central Asia: reservoirs of diversity of fruit and nut tree species” published in PLOS ONE, researchers address this gap and show the rich diversity – both within and across species – of fruit and nut trees that Central Asian home gardeners maintain. Drawing on interviews with home garden managers, the authors also show the links between trees in these gardens and their wild relatives in nearby forests.

The researchers found the home gardens were established about on average 40 to 50 years before the data collection, that is, during the rule of the Soviet Union, with some older home gardens over 70 years old found in Uzbekistan and Kyrgyzstan, and some very young ones found in Kyrgyzstan. In Tajikistan, “These trees have been vital for people to survive during times of conflict, and these home gardens with trees and vegetables play an important role to support families, providing a lot of the food for the household, in addition to income,” explains Barbara Vinceti, a forest ecologist and the lead author of the study.

Marlène Elias, a Senior Scientist at the Alliance of Bioversity International and CIAT, says home gardens’ role in sustaining and protecting a rich diversity of tree species make them “living genebanks.”

“In Kyrgyzstan, Uzbekistan, and Tajikistan, we examined this dynamic flow of planting material and its sources, understanding the future prospects of home gardens, and looking at differences between the three countries,” Vinceti said, adding that home gardens show a similar portfolio of most abundant tree species (apple, apricot, walnut, pear and plum) across national contexts.

Local diversity is at risk

Yet, despite this rich diversity, Vinceti cautions that foreign varieties have become more common in home gardens because they are increasingly lucrative. Apple and pear varieties in particular are increasingly threatened by an influx of foreign commercial varieties.

“We saw a significant erosion of local tree varieties of key species as more varieties come from outside,” Vinceti said, adding that commercial exotics coming in from the USA, Russia and Europe were starting to replace local diversity in home gardens.

“People have been managing these home gardens for decades because they serve several purposes,” Vinceti said. “Now that outside varieties are emerging with some market value, the traditional varieties are at risk – and once that diversity is lost is lost, it is lost forever.”

The researchers suggested that given the interest they found for younger generations to maintain home gardens and even expand fruit and nut tree cultivation, efforts to conserve tree species diversity and local varieties should be well integrated in the national research and extension programs, to enable these complex systems to continue to thrive despite the increasing pressures.