Hotspots Show That Vegetation Alters Climate by Up to 30%

Columbia Engineers find strong feedbacks between the atmosphere and vegetation that explain up to 30% of precipitation and surface radiation variance; study reveals large potential for improving seasonal weather predictions

25-May-2017 2:05 PM EDT, by Columbia University School of Engineering and Applied Science
favorite_border 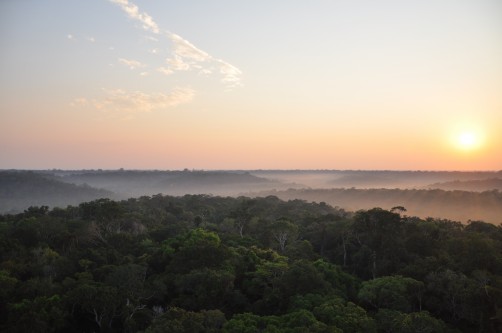 Photo of the Amazon forest taken from an eddy co-variance tower near Manaus, northwestern Brazil 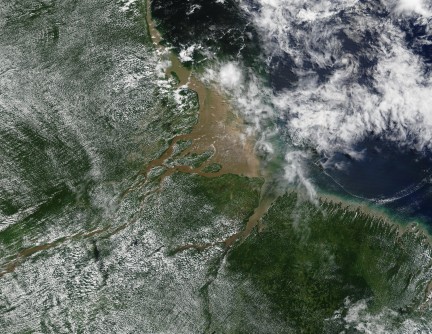 View of the Amazon basin taken by MODIS (Moderate Resolution Imaging Spectroradiometer), a key instrument aboard the Terra and Aqua satellites, showing the impact of the surface moisture and rivers in particular on shallow clouds.

Hotspots Show that Vegetation Alters Climate by Up to 30%

Columbia Engineers find strong feedbacks between the atmosphere and vegetation that explain up to 30% of precipitation and surface radiation variance; study reveals large potential for improving seasonal weather predictions

Newswise — New York, NY—May 29, 2017—A new Columbia Engineering study, led by Pierre Gentine, associate professor of earth and environmental engineering, analyzes global satellite observations and shows that vegetation alters climate and weather patterns by as much as 30 percent. Using a new approach, the researchers found that feedbacks between the atmosphere and vegetation (terrestrial biosphere) can be quite strong, explaining up to 30 percent of variability in precipitation and surface radiation. The paper (DOI 10.1038/ngeo2957), published May 29 in Nature Geoscience, is the first to look at biosphere-atmosphere interactions using purely observational data and could greatly improve weather and climate predictions critical to crop management, food security, water supplies, droughts, and heat waves.

“While we can currently make fairly reliable weather predictions, as, for example, five-day forecasts, we do not have good predictive power on sub-seasonal to seasonal time scale, which is essential for food security,” Gentine says. “By more accurately observing and modeling the feedbacks between photosynthesis and the atmosphere, as we did in our paper, we should be able to improve climate forecasts on longer timescales.”

Vegetation can affect climate and weather patterns due to the release of water vapor during photosynthesis. The release of vapor into the air alters the surface energy fluxes and leads to potential cloud formation. Clouds alter the amount of sunlight, or radiation, that can reach the Earth, affecting the Earth’s energy balance, and in some areas can lead to precipitation. “But, until our study, researchers have not been able to exactly quantify in observations how much photosynthesis, and the biosphere more generally, can affect weather and climate,” says Julia Green, Gentine’s PhD student and the paper’s lead author.

Recent advancements in satellite observations of solar-induced fluorescence, a proxy for photosynthesis, enabled the team to infer vegetation activity. They used remote sensing data for precipitation, radiation, and temperature to represent the atmosphere. They then applied a statistical technique to understand the cause and feedback loop between the biosphere and the atmosphere. Theirs is the first study investigating land-atmosphere interactions to determine both the strength of the predictive mechanism between variables and the time scale over which these links occur.

The researchers found that substantial vegetation-precipitation feedback loops often occur in semi-arid or monsoonal regions, in effect hotspots that are transitional between energy and water limitation. In addition, strong biosphere-radiation feedbacks are often present in several moderately wet regions, for instance in the Eastern U.S. and in the Mediterranean, where precipitation and radiation increase vegetation growth. Vegetation growth enhances heat transfer and increases the height of the Earth’s boundary layer, the lowest part of the atmosphere that is highly responsive to surface radiation. This increase in turn affects cloudiness and surface radiation.

“Current Earth system models underestimate these precipitation and radiation feedbacks mainly because they underestimate the biosphere response to radiation and water stress response,” Green says. “We found that biosphere-atmosphere feedbacks cluster in hotspots, in specific climatic regions that also coincide with areas that are major continental CO2 sources and sinks. Our research demonstrates that those feedbacks are also essential for the global carbon cycle—they help determine the net CO2 balance of the biosphere and have implications for improving critical management decisions in agriculture, security, climate change, and so much more.”

Gentine and his team are now exploring ways to model how biosphere-atmosphere interactions may change with a shifting climate, as well as learning more about the drivers of photosynthesis, in order to better understand atmospheric variability.

Paul Dirmeyer, a professor in the department of atmospheric, oceanic and earth sciences at George Mason University who was not involved in the study, notes: "Green et al. put forward an intriguing and exciting new idea, expanding our measures of land-atmospheric feedbacks from mainly a phenomenon of the water and energy cycles to include the biosphere, both as a response to climate forcing and a forcing to climate response."

The study is titled "Regionally strong feedbacks between the atmosphere and terrestrial biosphere.”

PAPER: DOI 10.1038/ngeo2957. Once the paper is published electronically, the DOI can be used to retrieve the abstract and full text from the Nature website by adding it to the following url: http://dx.doi.org/. Embargos for papers published in this way will lift at the time of electronic publication. 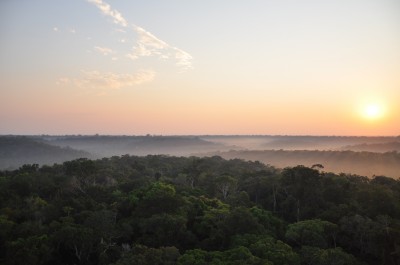 Caption: Photo of the Amazon forest taken from an eddy co-variance tower near Manaus, northwestern Brazil 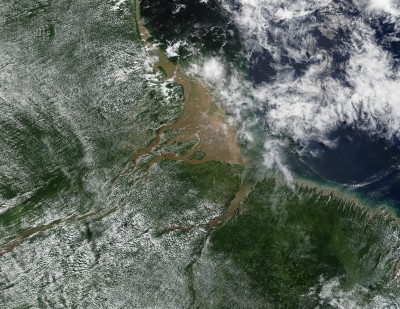 Caption: View of the Amazon basin taken by MODIS (Moderate Resolution Imaging Spectroradiometer), a key instrument aboard the Terra and Aqua satellites, showing the impact of the surface moisture and rivers in particular on shallow clouds.