How Dogs Do the ‘Dog Paddle’: An Evolutionary Look at Swimming 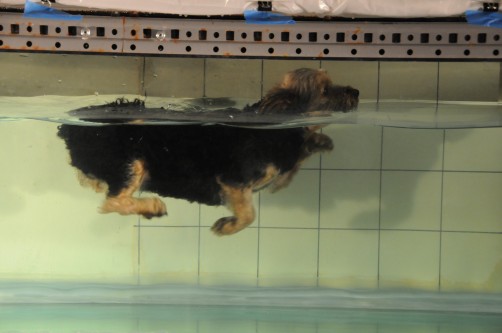 How dogs do the ‘dog paddle’: An evolutionary look at swimming

Most adults remember their first success in learning to swim using the ‘dog paddle’. This classic maneuver has been used to describe swimming in armadillos, turtles, even humans – just about everything except dogs. Dr. Frank Fish, a professor of biology at West Chester University, set out with his colleagues to understand how real dogs perform the dog paddle. Fish has spent most of his career studying the swimming of marine mammals such as whales. But looking at swimming in dogs afforded Fish the opportunity to investigate how swimming in marine mammals may have evolved from walking in their terrestrial ancestors.

For the study, Fish used eight different dogs that spanned six breeds, ranging from the Yorkshire terrier to the Newfoundland. Several dog owners, including Fish himself, volunteered their pets to take part in the study. The trick to analyzing the swimming movements was to find a large area of clear water where the dogs could swim and be recorded, which they found in a rehabilitation pool for horses at the University of Pennsylvania. In the pool, the dogs were encouraged to swim while their legs were filmed with an underwater video camera.

Fish and his colleagues analyzed the videos and found that the dogs were swimming with a gait that was similar to a familiar trot on land. When a dog trots, moving at a pace more brisk than a walk, diagonal pairs of legs move together. In swimming, the dog’s legs move in a similar fashion, but even faster than a trot, and the legs move beyond the range of motion for a trot. This means that the swimming dogs are using a basic movement but with some modification. Also, while the movements that make up terrestrial gaits like trotting can vary from one dog breed to another, the dog paddle gait showed very little variation among the different breeds.

While dogs are able to swim, it is not as natural for them as walking and other terrestrial gaits. These differences in coordination provide an opportunity to examine the evolution of swimming in other mammals right from the start. Did the earliest ancestors of swimming mammals fumble as they took to the water? As Fish puts it, “how bad are you at the beginning?” There is strong evidence that the ancestors of the cetaceans (whales, dolphins, and porpoises) were long-limbed terrestrial quadrupeds, and changes to the musculature and the skeleton eventually led to limbs become more like paddles. Although dogs are not ancestors to cetaceans, they can be used as a model for precursors to early swimming mammals. Fish hopes to unravel the steps that led from a four-legged terrestrial form to an animal like a dolphin, which has highly complex swimming locomotion.

“Dogs are enthusiastic and they like to work,” Fish says. Here, the dogs’ work is leading Fish to answers for evolutionary questions simply by performing their namesake movement: the dog paddle. Fish presented the findings of his dog study at the 2014 Society for Integrative and Comparative Biology (SICB) meeting, held in Austin, TX.