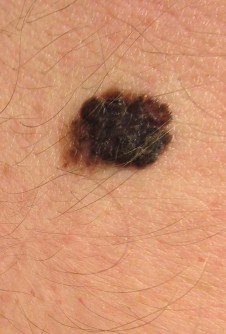 The mutation BrafV600E is found in 70 percent or more of benign birthmarks and moles in humans.

An initial mutation, called BrafV600E, is found in 70 percent or more of benign birthmarks and moles in humans, and has long been believed to precede the development of melanomas, even though the Braf mutation alone does not seem to be enough to cause cancer. What skin cancer researchers have not had -- until the present report in Nature Genetics -- is a list of genes or genetic pathways that, once altered, work with the Braf mutation to cause cancer.

"We want to know what exactly must happen after someone acquires this mutation in Braf that causes something even worse to happen," said Houston Methodist Research Institute cancer geneticist Michael Mann, Ph.D., the Nature Genetics report's lead author. "We want to understand how this Braf mutation makes people vulnerable... susceptible to melanoma, so that we can help identify new targets for slowing or stopping growth."

"By using Sleeping Beauty strategically, our group was able to identify an incredible number of genes that may cause nevi -- moles and other skin marks -- to become cancerous," Mann said. "As we expected, we haven't just identified single genes that respond to the Braf mutation, but whole pathways that appear to contribute to cancer development. This is important, because if you look at it tumor by tumor, the same pathways may appear to be engaged, but not because of changes to the same genes. If you looked only at singular genes, you could miss what is really going on, biologically."

By letting Sleeping Beauty loose in the model's genome and looking for meaningful outcomes, the scientists were able to identify 1,232 altered CCGs that, with BrafV600E, led to melanomas.

A comparison of human genes equivalent to those the scientists identified in mice showed that more than 500 human genes, sampled from melanoma patients, were "enriched" for mutations and that these mutations appeared to be related to patient survival. A genetic survey of human melanoma patients whose skin biopsies already contain BrafV600E and other relevant mutations could be helpful to oncologists in predicting patient outcomes.

Last, the researchers found that one human gene, CEP350, appears to be required for tumor suppression. CEP350 had not previously been named a melanoma tumor suppressor gene. CEP350 encodes a protein believed to be crucial for cell division.

Cancers of the skin are the most common form of cancer. In the U.S., the American Cancer Society estimates nearly 10,000 will die from metastatic melanomas by year's end. Globally, the World Heath Organization estimates one person dies from melanoma every 50 seconds.