If Your Favorite Brand Is Sincere, Is Innovation What You Expect? 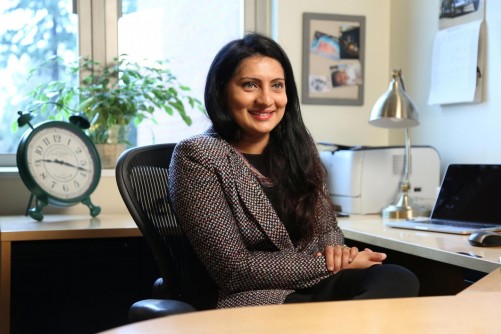 Aparna Sundar, assistant professor of marketing at the University of Oregon, led a multi-part project that explored how sight and touch impact people's view of innovations by brands deemed exciting and sincere.

Newswise — EUGENE, Ore. -- April 25, 2016 -- Open the box of that new smartphone. Oops, it feels differently from expectations based on what you'd seen. Embrace it or be disappointed? Your reaction is likely tied to your perception of the brand, says Aparna Sundar of the University of Oregon.

A brand viewed as exciting has wiggle room to introduce innovations that don't match consumers' expectations, said Sundar, a professor of marketing in the Lundquist College of Business. Not so for a brand seen as sincere, she said.

The conclusions are based on four studies that explored brand-consumer relationships involving sight and touch. Sundar conducted the research with Theodore J. Noseworthy, a marketing professor at York University in Toronto. The findings were published in the Journal of Consumer Research.

"When you are looking at the marketing of products, a big part is the sensory aspects of the product's packaging," she said. "Even though we might think of it as trivial, it is actually influential in the way we inform our consumption decisions. It's not just visual, it consists of other sensory cues such as touch."

Exciting brands are considered unique and attention getting. Sincere brands are viewed as consistent and trustworthy. Exciting and sincere are important brand personalities, because they capture the intimate personal relationships between consumers and brands.

As a backdrop to their final study of the project, Sundar and Noseworthy cited previous research that showed Apple to be creative, young and exciting, while, in contrast, Nokia is seen as sincere and more down to earth.

The project focused on participants' reactions when marketers surprise them with a product that feels differently than it looks. "Our early studies used fictitious brands where consumers have no prior associations," Sundar said. "We only manipulated participants' expectations of a brand's personality. We identified samples as being from sincere or exciting brands by providing the characteristics of each brand."

In the first study, participants -- 207 people in a coffee shop -- saw prototype packaging of a new coffee about to be introduced. The package either looked and felt like burlap or looked like burlap but felt like paper. Participants were asked how likely they'd be to purchase it and how much they'd be willing to pay.

The second study, involving 167 people at a shopping mall, explored perceptions of authenticity that may have influenced responses in the first study; participants were shown prototype packaging for a new board game and pamphlets describing the brand and asked about their reactions.

In the final study, 400 people at a shopping mall were shown a prototype of smartphones introduced by Apple and Nokia. The only variation was that upon touching the phone's sleeve, which appeared to be plastic, it felt like it was either made out of plastic (sensory confirmation), metal (positive sensory mismatch) or cardboard (negatively sensory mismatch).

Across all studies, participants were fine with sensory mismatches involving an exciting brand, but they did not like such sensory marketing tactics when introduced by brands that were seen as sincere.

"Marketers need to think about how sensory innovation aids the narrative of the brand," Sundar said. "If you are a sincere brand, sensory mismatch may not serve you, even if it is a novel introduction. Exciting brands, on the other hand, can exploit consumer perception by conjuring surprise through sensory mismatch."

Note: The University of Oregon is equipped with an on-campus television studio with a point-of-origin Vyvx connection, which provides broadcast-quality video to networks worldwide via fiber optic network. In addition, there is video access to satellite uplink, and audio access to an ISDN codec for broadcast-quality radio interviews.