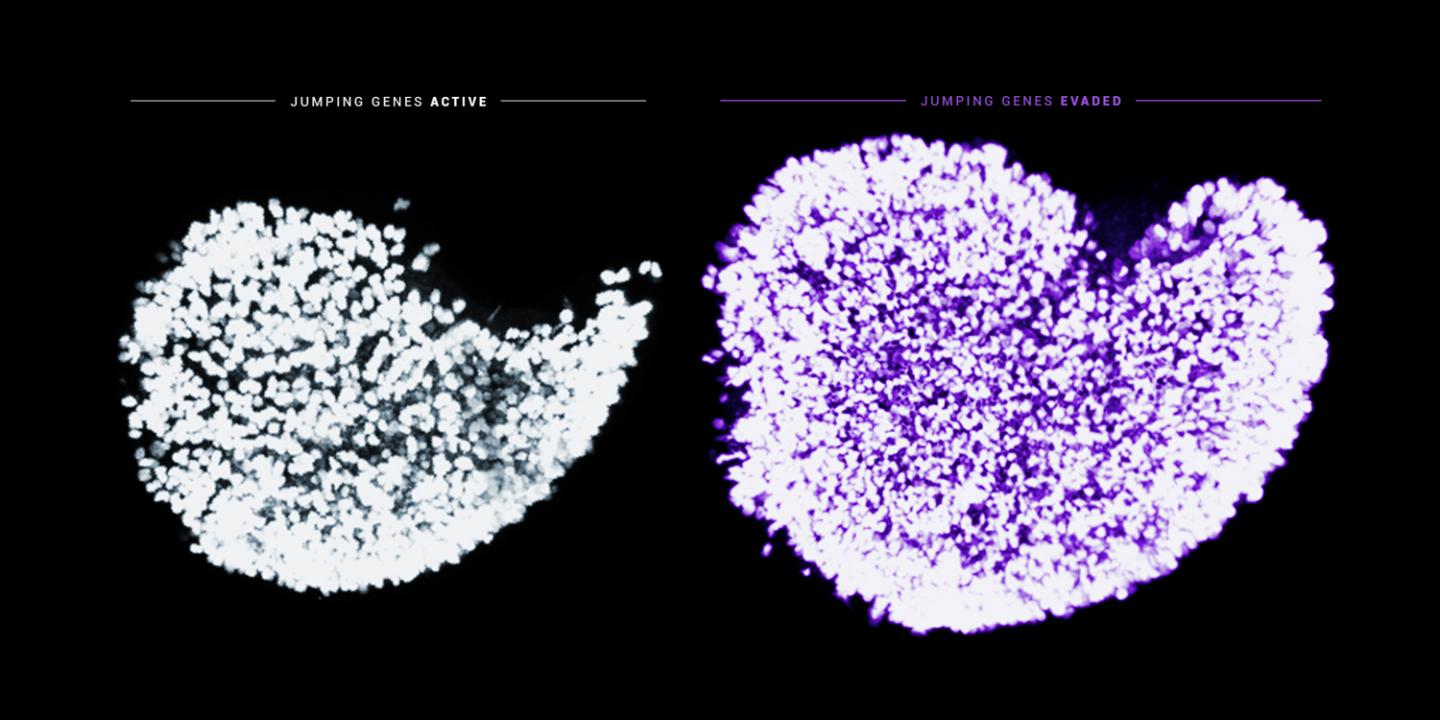 Credit: Photograph is courtesy of Marla Tharp and Navid Marvi

This image displays the dramatic increase in the endowment of immature egg cells in newborn mice when the Fetal Oocyte Attrition is prevented from occurring. Shown in white is an ovary exposed to normal physiological activity of the jumping gene LINE-1. Shown in purple is an ovary that's been treated with AZT to inhibit LINE-1 and mutated to turn off the DNA damage checkpoint Chk2. The nuclei of individual immature egg cells are labeled by a germ cell-specific marker.

Newswise — Baltimore, MD-- A woman's supply of eggs is finite, so it is crucial that the quality of their genetic material is ensured. New work from Carnegie's Marla Tharp, Safia Malki, and Alex Bortvin elucidates a mechanism by which, even before birth, the body tries to eliminate egg cells of the poorest quality. Their findings describing this mechanism are published by Nature Communications.

"Some organisms produce a large number of offspring, many of which don't survive to adulthood; females in these species continually produce new egg cells throughout their reproductive lives," Bortvin explained. "But in mammals, females are born with a fixed supply of eggs and produce few progeny. Thus, each egg is a precious commodity necessitating quality control to ensure wellbeing of her children."

For 50 years, scientists have known that up to 80 percent of a female mammal's original pool of potential egg cells are eliminated during fetal development through a process called fetal oocyte attrition, or FOA. This phenomenon is conserved in all studied mammals, but despite its ancient origins, much about this process remains mysterious. Bortvin and his team say FOA targets those egg cells with reduced quality.

Previous work by Bortvin and Malki indicated that this elimination of potential egg cells during fetal development is related to a transposable element, or "jumping gene," called LINE-1.

Bortvin's group had previously demonstrated that jumping genes are quashed during sperm production, but not during egg development. They theorized that purging the cells with the greatest activity by the jumping gene LINE-1 allows for the selective survival of the immature eggs that have the lowest potential of succumbing to jumping genes.

Indeed, Malki and Bortvin previously discovered that AZT, a drug that blocks the multiplication of HIV and LINE-1, temporarily prevented death of immature egg cells. This observation indicated that that there was more than one mechanism to detect and eliminate egg cells with excessive LINE-1 activity.

Taking this idea to the next stage, the research team expanded their investigations by using AZT in mice lacking a protein called Chk2, which detects DNA damage and either repairs it or flags the cells where this genetic material is housed for death. When the LINE-1 jumping gene was inhibited by AZT, and the Chk2 protein was rendered ineffective by mutation, the reserve of egg cells increased.

"What's more, the shutting off the fetal egg cell elimination process in this way did not decrease fertility," Tharp explained. "This provides further evidence that this is a quality control process undertaken to try to maintain the caliber of the available egg supply."

More work is needed to determine whether these findings could help combat infertility due to premature ovarian failure by increasing a woman's total egg supply.

This work was funded by the National Institutes of Health