Newswise — BIRMINGHAM, Ala. — Calcified nodules in the retina are associated with progression to late stages of age-related macular degeneration.

University of Alabama at Birmingham Department of Ophthalmology and Vision Sciences Professor Christine Curcio, Ph.D., working in partnership with the Queen’s University Belfast and in collaboration with United Kingdom material scientists and United States clinical ophthalmology practices, made the ground-breaking discovery that the calcified nodules in the retina — the thin layer of tissue that lines the back of the eye — increase the risk for progression to advanced AMD.

The findings will impact diagnosis and prognosis using modern imaging tools for people with AMD, which is the leading cause of vision impairment in older individuals worldwide.

Currently, there is no treatment for the majority of patients with AMD, and irreversible visual loss has been associated with depression and other health problems. Experts carried out the research because of the urgent need to identify early events that might lead to visual loss so that these triggers can be targeted. Better visualization of the disease timeline is an important step.

The team discovered that large calcified nodules in the retina are indicators of progression risk for late stages of AMD, because they were associated with degeneration of nearby retinal cells. The experts believe that, with further research and with early intervention, some patients could actually be offered simple measures such as modifying their diet.

“By fully understanding the causes behind the changing environment in which these large, damaging nodules grow, we could design new ways to intervene with their growth earlier in the disease process than is currently possible,” Curcio said.

Curcio says the identification of these risks associated with disease progression in the eye, especially in the retina, could become a diagnostic tool for monitoring the progression of retinal degeneration with imaging.

“This allows ophthalmologists to counsel their patients more wisely and also allows us to think about slowing or halting the progression of disease earlier in its course,” she said.

Imre Lengyel, Ph.D., senior lecturer and researcher in the School of Medicine, Dentistry and Biomedical Sciences at Queen’s University Belfast, says their research revealed that early changes in the back of the eye can lead to the build-up of hard mineral deposits, made of calcium and phosphate, that may incorporate other types of trace metals, like magnesium.

“The build-up of these mineral deposits is an indicator of irreversible damage of the retina,” Lengyel said.

Treatment of AMD can be expensive, as are caregiving and institutional living. In the publication, researchers said that, based on the global burden of AMD, the cost is estimated to be more than $300 billion worldwide. Therefore, delaying progression of AMD or, better yet, minimizing or eliminating risk factors could lead to a substantial reduction in costs borne by health care payers, individuals and society.

The next steps for the research team will be to further their understanding of the disease processes associated with this degeneration. The team will aim to help determine new treatment and prevention options for patients, which could be as simple as modification of diet. The research will also allow ophthalmologists to care for AMD patients with more detailed information from diagnostic clinical imaging.

Curcio is the White-McKee Endowed Professor in Ophthalmology and director of the AMD Histopathology Lab. 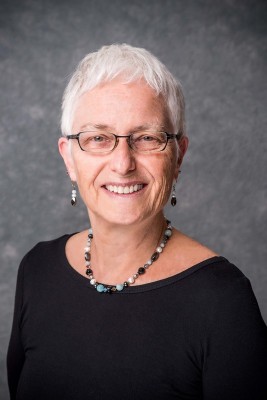 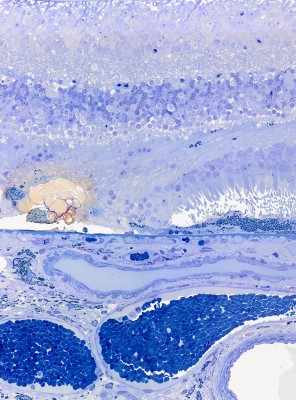 Caption: The team discovered that large calcified nodules (seen in orange) in the retina are indicators of progression risk for late stages of AMD.