Mangroves at risk of collapse if emissions not reduced by 2050, international scientists predict 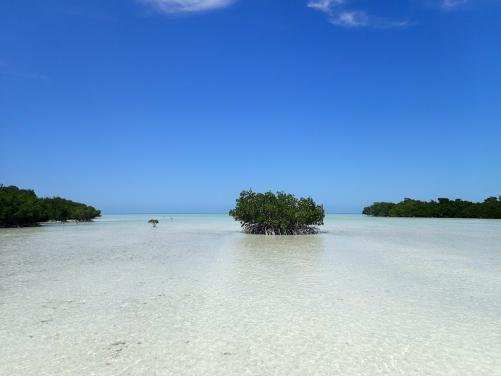 Mangroves are amongst the most valuable of natural ecosystems, supporting coastal fisheries and biodiversity. 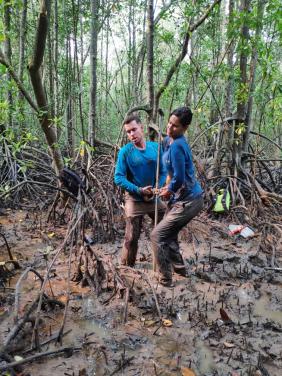 Dr Nicole Khan (right) and her colleague investigating the growth of mangroves.

This mangrove roots help to soak up greenhouse gas emissions at densities far greater than other forests.

Newswise — An international research team comprising scientists from the University of Hong Kong, the Nanyang Technological University, Singapore (NTU Singapore), Macquarie University and the University of Wollongong (Australia) as well as Rutgers University (USA) has predicted that mangroves will not be able to survive with rising sea-level rates reached by 2050, if emissions are not reduced. The team's findings were recently published in one of the world's top peer-reviewed academic journal Science.

Using sedimentary archives from the Earth's past, researchers estimated the probability of mangrove survival under rates of sea-level rise corresponding to two climate scenarios - low and high emissions.

When rates of sea-level rise exceeded 6 mm per year, similar to estimates under high emissions scenarios for 2050, the researchers found that mangroves very likely (more than 90% probability) stopped keeping pace. In contrast, mangroves can survive sea-level rise by building vertically when the rise remains under 5 mm per year, which is projected for low emissions scenarios during the 21st century.

The threshold of 6 mm per year is one that can be 'easily surpassed' on tropical coastlines - if society does not make concerted efforts to cut carbon emissions, said lead investigator of the study, Professor Neil Saintilan, from the Department of Earth and Environmental Sciences at Macquarie University.

Professor Saintilan said, "We know that sea-level rise is inevitable due to climate change, but not much is known about how different rates of sea-level rise affect the growth of mangroves, which is an important ecosystem for the health of the earth."

"Most of what we know about the response of mangroves to rising sea level comes from observations over the past several years to decades when rates of rise are slower than projected for later this century. This research offers new insights because we looked deeper into the past when rates of sea-level rise were rapid, reaching those projected under high emissions scenarios," said Dr Nicole Khan, Assistant Professor of Department of Earth Sciences, The Unviersity of Hong Kong.

With their iconic roots that rise from under the mud, mangrove stands grow in a process called vertical accretion. This feature is crucial to the ecosystem as it helps to soak up greenhouse gas emissions (carbon sequestration) at densities far greater than other forests, and provides a buffer between the land and sea - helping protect people from flooding on land.

The study, which covered 78 locations over the globe, explores how mangroves responded as the rate of sea-level rise slowed down from over 10 mm per year 10,000 years ago to nearly stable conditions 4,000 years later. The drawdown of carbon as mangrove forests expanded over this time period contributed to lower greenhouse gas concentrations.

The study found that mangroves will naturally encroach inland if its ability to vertically accrete is hindered.

"Our results underscore the importance of adopting coastal management and adaptation measures that allow mangroves to naturally expand into low-lying coastal areas to protect these valuable ecosystems," said Dr Khan.

Professor Benjamin Horton, Chair of the Asian School of the Environment at NTU Singapore, who co-authored the paper, said, "In 30 years, if we continue upon a high-emissions trajectory, essentially all mangroves, including those across southeast Asia, will face a high risk of loss."

"This research therefore highlights yet another compelling reason why countries must take urgent action to reduce carbon emissions. Mangroves are amongst the most valuable of natural ecosystems, supporting coastal fisheries and biodiversity, while protecting shorelines from wave and storm attack across the tropics," Professor Horton added.

Caption: Mangroves are amongst the most valuable of natural ecosystems, supporting coastal fisheries and biodiversity.

Caption: Dr Nicole Khan (right) and her colleague investigating the growth of mangroves.

Caption: This mangrove roots help to soak up greenhouse gas emissions at densities far greater than other forests.