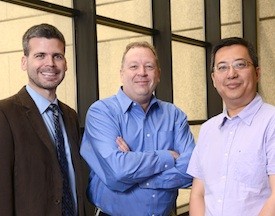 Newswise — DALLAS – July 24, 2014 – A protein that controls when genes are switched on or off plays a key role in specific areas of the brain to regulate metabolism, UT Southwestern Medical Center researchers have found.

The research potentially could lead to new therapies to treat obesity and diabetes, since the transcription factor involved – spliced X-box binding protein 1 (Xbp1s) – appears to influence the body’s sensitivity to insulin and leptin signaling. Insulin and leptin are hormones central to the body’s regulation of food intake and sugar disposal, and obesity and diabetes are conditions under which the body develops resistance to their actions.

“This study identifies critical molecular mechanisms that link the brain and peripheral endocrine tissues and that ultimately contribute to the regulation of body weight and glucose metabolism,” said Dr. Kevin Williams, Assistant Professor of Internal Medicine and co-first author of the study with Dr. Tiemin Liu, a postdoctoral research fellow in Internal Medicine.

Researchers found that over-expression of the gene Xbp1s in mice that were fed a high-fat diet protected them against obesity and diabetes, according to the recent study, published online in Cell Metabolism. On average, these mice were 30 percent leaner than mice fed the same food.

“Manipulating this one gene in the brain affected metabolism in the liver. This result shows that the brain is controlling glucose production by the liver,” said Dr. Joel Elmquist, Director of the Division of Hypothalamic Research, Professor of Internal Medicine, Pharmacology, and Psychiatry, and holder of the Carl H. Westcott Distinguished Chair in Medical Research, and the Maclin Family Distinguished Professorship in Medical Science, in Honor of Dr. Roy A. Brinkley.

About UT Southwestern Medical CenterUT Southwestern, one of the premier academic medical centers in the nation, integrates pioneering biomedical research with exceptional clinical care and education. The institution’s faculty includes many distinguished members, including six who have been awarded Nobel Prizes since 1985. Numbering more than 2,700, the faculty is responsible for groundbreaking medical advances and is committed to translating science-driven research quickly to new clinical treatments. UT Southwestern physicians provide medical care in 40 specialties to nearly 91,000 hospitalized patients and oversee more than 2 million outpatient visits a year.###