Mapping the Microbiome of … Everything 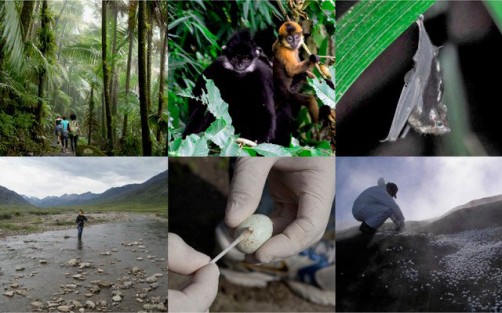 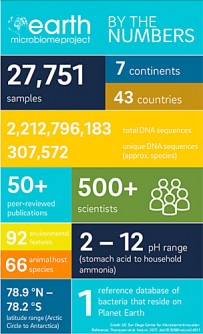 Newswise — In the Earth Microbiome Project, an extensive global team co-led by researchers at University of California San Diego, Pacific Northwest National Laboratory, University of Chicago and Argonne National Laboratory collected more than 27,000 samples from numerous, diverse environments around the globe. They analyzed the unique collections of microbes — the microbiomes — living in each sample to generate the first reference database of bacteria colonizing the planet. Thanks to newly standardized protocols, original analytical methods and open data-sharing, the project will continue to grow and improve as new data are added.

The paper describing this effort, published November 1 in Nature, was co-authored by more than 300 researchers at more than 160 institutions worldwide.

The Earth Microbiome Project was founded in 2010 by Rob Knight, PhD, professor at UC San Diego School of Medicine and director of the Center for Microbiome Innovation at UC San Diego; Jack Gilbert, PhD, professor and faculty director of The Microbiome Center at University of Chicago and group leader in Microbial Ecology at Argonne National Laboratory; Rick Stevens, PhD, associate laboratory director at Argonne National Laboratory and professor and senior fellow at University of Chicago; and Janet Jansson, PhD, chief scientist for biology and laboratory fellow at Pacific Northwest National Laboratory. Knight, Gilbert and Jansson are also co-senior authors of the Nature paper and Stevens is a co-author.

“The potential applications for this database and the types of research questions we can now ask are almost limitless,” Knight said. “Here’s just one example — we can now identify what kind of environment a sample came from in more than 90 percent of cases, just by knowing its microbiome, or the types and relative quantities of microbes living in it. That could be useful forensic information at a crime scene … think ‘CSI.’”

The goal of the Earth Microbiome Project is to sample as many of the Earth’s microbial communities as possible in order to advance scientific understanding of microbes and their relationships with their environments, including plants, animals and humans. This task requires the help of scientists from all over the globe. So far, the project has spanned seven continents and 43 countries, from the Arctic to the Antarctic, and more than 500 researchers have contributed to the sample and data collection. Project members are using this information as part of approximately 100 studies, half of which have been published in peer-reviewed journals.

“Microbes are everywhere,” said first author Luke Thompson, PhD, who took on the role of project manager while a postdoctoral researcher in Knight’s lab and is currently a research associate at the National Oceanic and Atmospheric Administration (NOAA). “Yet prior to this massive undertaking, changes in microbial community composition were identified mainly by focusing on one sample type, one region at a time. This made it difficult to identify patterns across environments and geography to infer generalized principles.”

Project members analyze bacterial diversity among various environments, geographies and chemistries by sequencing the 16S rRNA gene, a genetic marker specific for bacteria and their relatives, archaea. The 16S rRNA sequences serve as “barcodes” to identify different types of bacteria, allowing researchers to track them across samples from around the world. Earth Microbiome Project researchers also used a new method to remove sequencing errors in the data, allowing them to get a more accurate picture of the number of unique sequences in the microbiomes.

Within this first release of data, the Earth Microbiome Project team identified around 300,000 unique microbial 16S rRNA sequences, almost 90 percent of which don’t have exact matches in pre-existing databases.

Pre-existing 16S rRNA sequences are limited because they were not designed to allow researchers to add data in a way that's useful for the future. Project co-author Jon Sanders, PhD, a postdoctoral researcher in Knight’s lab, compares the difference between these other databases and the Earth Microbiome Project to the difference between a phone book and Facebook. “Before, you had to write in to get your sequence listed, and the listing would contain very little information about where the sequence came from or what other sequences it was found with,” he said. “Now, we have a framework that supports all that additional context, and which can grow organically to support new kinds of questions and insights.”

"There are large swaths of microbial diversity left to catalogue. And yet we’ve ‘recaptured’ about half of all known bacterial sequences,” Gilbert said.  “With this information, patterns in the distribution of the Earth’s microbes are already emerging.”

According to Gilbert, one of the most surprising observations is that unique 16S sequences are far more specific to individual environments than are the typical units of species used by scientists. The diversity of environments sampled by the Earth Microbiome Project helps demonstrate just how much local environment shapes the microbiome. For example, the skin microbiomes of cetaceans (whales and dolphins) and fish are more similar to each other than they are to the water they swim in; conversely, the salt in saltwater microbiomes makes them distinct from freshwater, but they are still more similar to each other than to aquatic animal skin. Overall, the microbiomes of a host, such as a human or animal, were quite distinct from free-living microbiomes, such as those found in water and soil. For example, the free-living microbiomes were far more diverse, in general, than host-associated microbiomes.

“These global ecological patterns offer just a glimpse of what is possible with coordinated and cumulative sampling,” Jansson said. “More sampling is needed to account for factors such as latitude and elevation, and to track environmental changes over time. The Earth Microbiome Project provides both a resource for the exploration of myriad questions, and a starting point for the guided acquisition of new data to answer them.”

Data collected and analyzed in the Earth Microbiome Project have already been used in many studies of:

Skin of whales, dolphins, seals, fish, birds, bats, cats, rats, rattlesnakes and Komodo dragons
Drinking water
Ocean communities from the surface of the North Atlantic to the deep seafloor of the Pacific
Oil spills
Gut health of primates
How gut microbiomes evolved to digest ants and how ant gut microbiomes evolved to eat plants
How soil microbes affect wine grapes
How obesity affects smelling of wine aromas
How the human microbiome changes over time and alters the spaces we live in 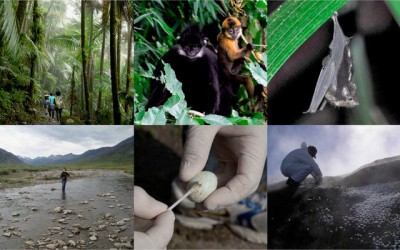 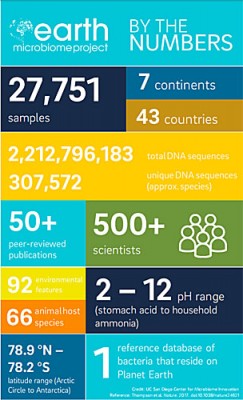