Mass Extinction is Hard on the Big Guys 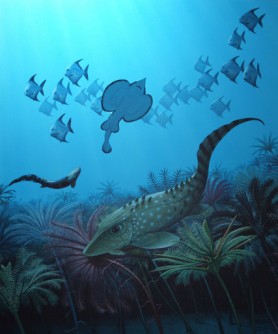 An illustration of small sharks and fishes of the Mississippian Period, more than 300 million years ago. Researchers found shrinkage in sizes of some groups of species following a mass extinction.

From sharks to giraffes, many of Earth’s biggest and most magnificent species are threatened with extinction. A new study of the fossil record indicates that once large vertebrates disappear, evolution cannot quickly restore them — for tens of millions of years, most animals remain small.

The study, published Thursday in Science, emerged from research carried out by Lauren Sallan, a paleontologist at the University of Pennsylvania.