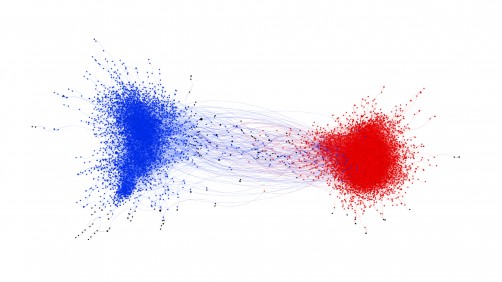 The graph represents a depiction of messages containing moral and emotional language, and their retweet activity, across three political topics: gun control, same-sex marriage, and climate change. Nodes represent a user who sent a message, and edges (lines) represent a user retweeting another user. The two large communities were shaded based on the mean ideology of each respective community (blue represents a liberal mean, red represents a conservative mean).

Newswise — Tweets about political topics that include moral and emotional language are more likely to spread within the ideological networks of the sender, a team of researchers has found. Its study, which examined Twitter messages related to gun control, climate change, and same-sex marriage, points to both the potential and limits of communicating on social media.

“The content that spreads the most may have the biggest impact on social media, so individuals, community leaders, and even political elites could see their influence enhanced by emphasizing morality and emotion in their online messaging,” explains William Brady, the lead author of the study and a doctoral candidate in New York University’s Department of Psychology. “However, while using this type of language may help content proliferate within your own social or ideological group, it may find little currency among those who have a different world view.”

The findings appear in the journal Proceedings of the National Academy of Sciences.

To help address this question, the researchers studied more than 560,000 tweets pertaining to an array of contentious political issues: gun control, climate change, and same-sex marriage. Here, they separated tweets containing words that were both moral and emotional (e.g., “greed”), emotional only (e.g., “fear”), and moral only (e.g., “duty”). They relied on previously established language dictionaries to identify emotional and moral terms.

The researchers examined how many times each category of messages was retweeted as well as the political ideology of both the sender of the original messages and of the retweeted ones. Ideology was calculated using an algorithm—based on previous research that shows users tend to follow those with a similar ideology—that analyzed the follower network of each user.

Their results showed that, across all three political topics, the presence of language defined as being both moral and emotional increased retweets by 20 percent per moral-emotional word. By contrast, the impact of exclusively moral or exclusively emotional language was not as consistently associated with an increase in retweets. In addition, the uptick in retweets was limited to like-minded networks—a much smaller effect was found among accounts with an ideology conflicting with the sender’s.

There were also some differences among the three issues in the types of moral-emotional messages that were retweeted. For example, in contrast to same-sex marriage, in which people were more likely to retweet positive messages (e.g., tweets using the hashtag “#lovewins”), when discussing climate change people were more likely to retweet negative messages, such as those referring to environmental harms caused by climate change.

“In the context of moral and political discourse in online social networks, subtle features of the content of your posts are associated with how much your content spreads socially,” observes Jay Van Bavel, an associate professor in NYU’s Department of Psychology and one of the study’s co-authors. “However, these results also highlight one process that may partly explain increased differences between liberals and conservatives—communications fusing morality and emotion are more likely to resemble echo chambers and may exacerbate ideological polarization.”