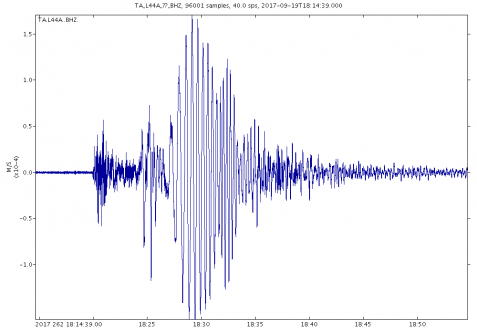 This image shows a recording of the earthquakes at one of Northwestern’s seismometers, located in the Ryerson Conservation Area.

EVANSTON, Ill. --- Seismologist Suzan van der Lee and structural engineer Gianluca Cusatis of Northwestern University are available to discuss the Sept. 19 earthquake in Mexico as well as the Sept. 8 earthquake off the shore of Mexico.

Seismologist Suzan van der Lee can comment on the earthquakes in general and how they fit into a plate-tectonic framework. She can share and discuss nice visuals for both earthquakes from the U.S. Geological Survey and from the Incorporated Research Institutions for Seismology (IRIS).

IMAGES: The earthquakes were recorded by the Northwestern Seismic Network, including at one of Northwestern’s seismometers located in the Ryerson Conservation Area. Yesterday’s earthquake can be clearly seen on the seismometer screen in the F-wing atrium of the Technological Institute on the Evanston campus. Van der Lee will instruct students in her class this quarter on how use data from these earthquakes.

“Mexico City suffered fatalities and infrastructural and economic losses, in part, because yesterday’s earthquake was close and, in part, because of the soft soil beneath large parts of the city,” Van der Lee said. “This soil shakes with the amplified motion a squash ball would have after it was hit by a rolling bowling ball.”

Van der Lee, a professor of Earth and planetary sciences, spent much of her early career imaging what happens to these tectonic plates after they subduct, mostly in terms of deep mantle structure. Her focus has been the U.S. and Canada, but Mexico now is experiencing similar processes as the U.S. and Canada faced several dozens of millions of years ago, she said.

Structural engineer Gianluca Cusatis can comment on the earthquakes from a structural engineering perspective. He is an expert on the mechanics of infrastructure materials and constitutive modeling of concrete.

He is an associate professor of civil and environmental engineering and co-director of the Center for Sustainable Engineering of Geological and Infrastructure Materials.