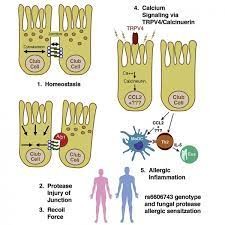 A model of how the mold digestive enzyme Alp1 can damage the lung's protective barrier to trigger asthma.

Newswise — MADISON, Wis. – University of Wisconsin–Madison researchers have identified a new way that common Aspergillus molds can induce asthma, by first attacking the protective tissue barrier deep in the lungs.

In both mice and humans, an especially strong response to this initial damage was associated with developing an overreaction to future mold exposure and the constricted airways characteristic of asthma.

The work provides a new avenue of research for understanding and potentially preventing the development of asthma, which affects 25 million Americans. Mold sensitivities account for a quarter to half of asthma responses, so preventing the body from establishing allergic reactions to mold could significantly reduce the burden of the disease.

UW–Madison Professor of Pediatrics, Medicine, and Medical Microbiology and Immunology Bruce Klein and postdoctoral researcher Darin Wiesner published their findings March 3 in the journal Cell Host and Microbe. They collaborated with researchers at the University of Chicago, University of Minnesota and Harvard Medical School to complete the work.

“Aspergillus is ubiquitous, it’s everywhere, and we’re inhaling spores with every breath we take,” says Klein. The team set out to understand how these otherwise harmless molds sensitize some individuals to develop a strong, asthmatic response to their spores.

The mold’s digestive enzymes were a natural target. Molds secrete these enzymes to digest proteins in their environment as they feed on decaying matter. One such enzyme, a protease called Alp1, is a known lung allergen and is secreted in large amounts by Aspergillus molds. But how Alp1 induces asthma has been a mystery for years.

Wiesner investigated if Alp1 could trigger a series of well-known allergic response pathways in the body. But he couldn’t find any evidence that Aspergillus Alp1 activated these allergic responses, which are often primed to respond to unique signatures of damaging microorganisms, such as pathogens.

“This idea that these ubiquitous fungi that aren't primary pathogens could have evolved highly specific components just didn't seem to make sense,” says Wiesner. “So it seemed more reasonable that these proteases one inhales into the lungs just cause damage. And the first thing that they interact with when they enter the lungs of both humans and mice are the epithelial cells.”

So Wiesner went looking for which of the 10 types of lung epithelial cells, which make up the lung surface, responded most strongly to Alp1 damage. He zeroed in on those known as club cells. Club cells reside mostly in the bronchioles, the smallest airway passages near where gases are exchanged with the blood. Club cells are known for trying to scrub pollutants from the lungs, so a role in responding to environmental assaults like molds made sense.

Like all lung cells, club cells bind themselves tightly to their neighbors to form a barrier between the lungs and the rest of the body. Those connections are made of proteins, which Alp1 is designed to attack and digest. Wiesner found that exposing mice to Alp1 caused the lung barrier to become leaky, evidence that Alp1 disrupted these cell junctions.

In looking for how the body sensed this damaged barrier, Klein’s team turned to the Childhood Origins of Asthma study, led by UW–Madison scientists, which followed hundreds of children for years to identify the genetic and environmental causes of asthma. They found that a mutation near a gene known as TRPV4, which increases the amount of TRPV4 protein produced by the body, was associated with mold-sensitive asthma in children.

Mice also make TRPV4. When Wiesner deleted the gene in mouse club cells, they were much less sensitive to Alp1. When he induced club cells to produce more TRPV4, mice were hypersensitive to the mold enzyme.

TRPV4 senses physical changes in a cell and unleashes a wave of calcium, which is then sensed by other cellular components. Calcium is a common cellular signal, but there’s been little evidence of calcium playing a role in producing asthma in the past.

Klein’s team now believes that Alp1 attacks the joints between lung cells, which jostles the cells. TRPV4 senses that motion and signals for help repairing the damage to the lung’s important barrier. In mice or humans with extra TRPV4, that response is strong enough to elicit an overreaction from the body. That excessive response primes the lungs to respond too strongly the next time they encounter Alp1. The resulting inflammation is felt as asthma.

This study is the first to implicate the TRPV4-calcium pathway in developing asthma, which could provide productive new lines of investigation to calming and preventing the asthmatic response to molds. Drugs exist that can block this calcium pathway but targeting them to the right cells at the right time to prevent the lungs from overreacting to harmless molds would require much more work.

“Previous drug trials have had disappointing results, but those have really been sledgehammer approaches where they just administer calcium channel blockers that would block every calcium channel in the airway,” says Wiesner. “Here, we suggest that targeting those drugs to a specific cell could give the specificity needed to just target the detrimental overresponse that leads to asthma.”