This microscopy photo demonstrates penetration of a fluorescent-labeled siRNA-L2 vs. synthetic nanoparticles into a three-dimensional tumor sample. 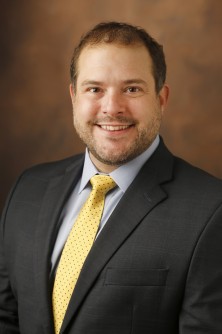 Newswise — Powerful molecules can hitch rides on a plentiful human protein and signal tumors to self-destruct, a team of Vanderbilt University engineers found.

Their research gives oncologists a better shot at overcoming the problems of drug resistance, toxicity to patients and a host of other barriers to consistently achieving successful gene therapy for cancer. It is particularly promising for patients with triple-negative breast cancer, an aggressive type that makes up about 15-20 percent of cases.

Craig Duvall, associate professor of biomedical engineering, put the effectiveness of a specialized ribonucleic acid hitchhiking on the human protein albumin up against jetPEI nanoparticles, the mostly widely used synthetic carrier for the task of tumor gene silencing.

His findings, reached with Samantha Sarett, a recent biomedical engineering Ph.D. graduate, are published today in the Proceedings of the National Academy of Sciences.

Ribonucleic acids can control the behavior of cancer cells, but they require a carrier to get them to the target. Duvall’s team made a simple modification to a small-interfering ribonucleic acid molecule, called siRNA-L2, allowing it to rapidly load into an albumin pocket typically reserved to ferry fatty acids around the body.

They found that the siRNA-L2, using albumin as its carrier, has no apparent dose-limiting toxicity, a significant problem for synthetic nanoparticles. That means a higher dose of the anti-cancer drug can be delivered to the tumor without potentially harming the patient.

“We used albumin because it’s the highest-concentrated protein in your blood,” Duvall said. “Our molecule, siRNA-L2, binds into the fatty acid pocket of albumin. If we put siRNA directly into the body without a carrier, it’s cleared out by the kidneys in two minutes. If we load siRNA into synthetic nanoparticles to avoid that, then they’re filtered out by the liver. Albumin circulates in the body for days, making the siRNA-L2 molecules more available for delivery into tumors.”

Because cancer cells show higher metabolic activity, the albumin that’s carrying siRNA-L2 travels to tumors and gets to work quickly. The molecule’s smaller size allows it to penetrate tumors at a higher rate – with 100 percent of tumor cells testing positive for siRNA-L2 as opposed to only 60 percent when the molecule was carried by jetPEI. Once there, Duvall’s molecule silences a gene crucial to the tumor’s growth and survival.

He said he used the synthetic carrier as a comparison because polymer-based jetPEI represents the gold standard available.

To make sure their results were translatable to human therapy, the team – in collaboration with Vanderbilt University Medical Center cancer biologist Dana Brantley-Sieders -- tested siRNA-L2 in human breast tumor tissue removed from the donor. The Vanderbilt molecule remained more effective, with siRNA-L2 more than three times as present in the tumor than siRNA delivered with synthetic nanoparticles.

Brantley-Sieders said their research has the potential of overcoming the biggest barriers to clinical application of gene-silencing ribonucleic acids.

“What fascinates and excites me most about this approach, in addition to improved tumor penetration, is lack of toxicity at a relatively high dose,” she said. “We could potentially use our siRNA delivery system to target several genes simultaneously or sequentially. Most cancers are driven by multiple abnormal genes, so targeting one often leads to activation of others as the tumor adapts.”