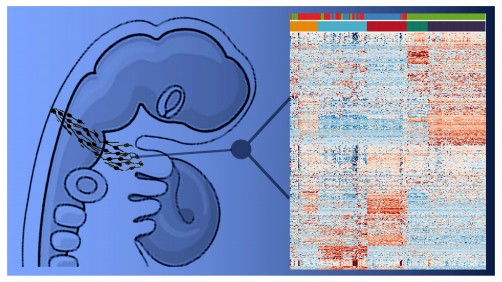 Newswise — KANSAS CITY, MO—The term “migration” may evoke grand images of birds flying south for the winter, but this phenomenon also occurs, on a smaller scale, deep within our bodies. Cells migrate whenever embryos develop, wounds heal, cancers metastasize, and immune systems respond to infection. However, the cellular and molecular mechanisms that drive collections of cells as they migrate from one region to another remain unclear.

Now, researchers at the Stowers Institute for Medical Research have published the first comprehensive analysis of the dynamic gene expression within single migrating cells from the neural crest, a highly invasive cell population that contributes to nearly every organ during human development. Two of the most aggressive forms of cancer, pediatric neuroblastoma and melanoma, are derived from neural crest cells.

In a study published online in the journal eLife, the researchers identified a molecular signature of approximately 1300 genes differentially expressed in an aggressive subset of migrating neural crest cells termed as “trailblazers” in a vertebrate model system of development. These genes appear to play a critical role in migration and may be part of a broader molecular signature of cell invasion in a number of phenomena.

“We found molecular diversity in the gene expression profiles of neural crest cells, as they migrated through different microenvironments of the developing chick embryo,” says Paul Kulesa, PhD, director of imaging at the Stowers Institute and senior author of the study. “But in one special subset of cells, the trailblazer cells, the profile was consistent in space and time. These cells appear to possess a unique ensemble of genes that enable them to forge ahead, breaking down the extracellular matrix, responding to directional signals, and sending guidance information back to the rest of the cells to follow suit.”

Even though the cells of the neural crest move collectively, they don’t migrate in flocks like birds. Rather, they exit the neural tube – the embryonic precursor of the brain and spinal cord – in a steady stream. First, a small population of leader cells heads out in the direction of the target, trailed by a larger population of follower cells. In this study, Kulesa and collaborators sought to identify the genomic signatures that embody different positions in this migratory stream and how gene expression within migrating cells changes over time.

To do so, co-lead author Rebecca McLennan, PhD, dissected hundreds of migrating neural crest cells from avian embryos. “It was very labor-intensive, and that is what was unique about this paper,” says McLennan, a research scientist at the Institute. “We derived cells directly from a typical migratory stream of the chick cranium during three progressive stages of development.” They then isolated single cells into individual tubes and used state-of-the-art gene profiling technology to determine the expression patterns of each cell.

The data revealed that the majority of neural crest cells change their gene expression in a consistent manner during migration. However, a small subpopulation of cells within the invasive front had a conserved “trailblazer” signature throughout migration that consisted of approximately 1300 differentially expressed genes. Several of these genes, such as BAMBI, PKP2, and WNT5B, have been implicated in human cancer cell invasion. When the researchers knocked down the expression of several of these trailblazer genes in the chick model, they found that the cells migrated a shorter distance.

Now that the researchers have identified the invasion signature of trailblazer cells, they are looking for similarities with other invasive cell types. Jason Morrison, co-lead author, curated the available published genomic data from thirty-four other cell invasion signatures in cancer, embryonic development, wound healing, and the immune response, and filtered the 1300 trailblazer genes down to forty-three genes common to at least two other cell invasion signatures. “By looking at signatures from a variety of different invasive cell types, we are hoping to strip out what is unique to each one but get to the base common denominator that really causes the invasion,” says Morrison, a research specialist at the Institute.

In the future, the researchers plan to explore the function of these genes using their dynamic live-imaging platform optimized for visualizing individual cell behaviors in avian embryos. Through these studies, they hope to further contribute to the understanding of how molecular diversity translates into complex coordinated cell behaviors that may be vital to neural crest-related birth defect prevention and may suggest molecular targets to inhibit neuroblastoma and melanoma disease progression.

Collective cell migration describes the movement of a group of cells in a directed and cohesive manner, and it plays a critical role in embryonic development, wound healing, cancer spreading, and the immune response. In the scientific journal eLife, Stowers Institute researchers recently reported the first comprehensive analysis of the molecular transitions and gene expression signatures of single migrating cells from the neural crest, a cell population crucial to organ development and the ancestral cell type of two deadly forms of human cancer. Stowers Director of Imaging and senior author Paul Kulesa, PhD, explains that they discovered a signature of 1300 differentially expressed genes indicative of an invasive subset of migrating cells known as “trailblazers.” These genes appear to drive migration and may be part of a broader molecular signature in other biological phenomena involving cell invasion.