Mommy and Me: Parent Trees Pass to Offspring Fungal Associations That May Provide Drought Tolerance 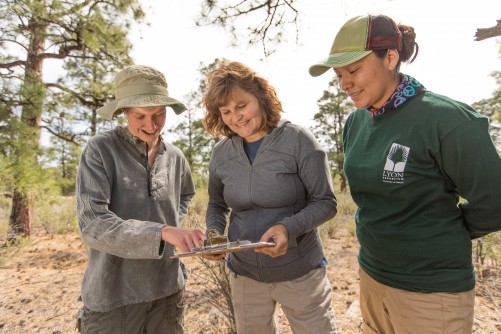 NAU professor of biology and the paper’s lead author Catherine Gehring with Adair Patterson and Arlyssia Sells at a research site in northern Arizona.

Newswise — Soil fungi that help promote drought tolerance in pinyon pine (Pinus edulis), a dominant tree in the Southwest, are passed from mother trees to their offspring, according to research published in Proceedings of the National Academy of Sciences. These findings help explain why some pinyon pines survived record drought while others did not.

First, the findings show that the genetics of the parent pinyon pine influence the species of soil fungi that colonize the roots of their seedlings. Additionally, the species of soil fungi differed between drought-tolerant and drought-intolerant trees, and these differences were the key to surviving drought. These insights could be used to restore pinyon forests devastated by recent large drought-related die offs.

“Our findings highlight the incredible value of long-term research,” noted Dr. Catherine Gehring, the study’s lead author and co-executive director of the NAU Merriam-Powell Center. “Integrating long-term field studies with greenhouse and common garden experiments allowed us to understand the differences in tree survival and growth we saw following drought in northern Arizona.”

The beneficial fungal communities that occur in association with the roots of most plant species help their host plants take up soil nutrients and water. The importance of soil fungi to the growth and survival of pinyon pine was examined over a two decade period that included pre-drought and drought conditions by a team of Northern Arizona University researchers.

The research team’s early field studies examined the susceptibility of adult pinyon pines to a moth species (Dioryctria albovittella), the larvae of which feed on the trees and alter their appearance by causing twig dieback. The trees that were not susceptible to the moth survived and grew at faster rates than their counterparts before the onset of drought.

Drought resulted in a reversal of fortune that became obvious in the field. The trees that were susceptible to the moth and disfigured by its larvae performed better in the drier and hotter conditions caused by drought. Drought tolerant trees had 25% higher growth and one-third of the mortality of drought intolerant trees during ten years of drought in the wild, traits also observed in their seedlings in a common garden.

The relatively rapid swing in advantage from the herbivore-resistant, drought intolerant trees to the “ugly” drought tolerant trees has implications for restoration. In the face of drought, it will become increasingly important to understand surprising and complex relationships. Decisions to plant herbivore-resistant trees may have to be balanced against a heightened vulnerability to drought.

“This study underscores the leading role that Northern Arizona University plays in the areas of soil fungal and community genetics research,” said Dr. David Schultz, NAU’s Vice President for Research. “This study also demonstrates the interlinked importance of the genetics of a tree and its microbiome, and perhaps offers a strategy for conserving Arizona’s pinyon pine forests.”