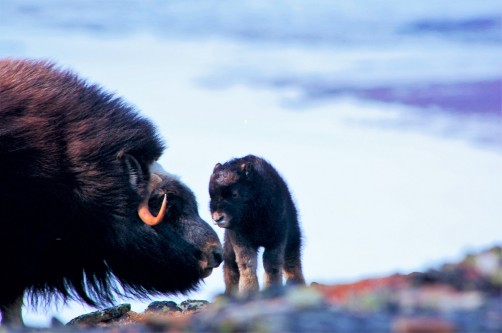 Newswise — A new study from WCS (Wildlife Conservation Society) and partners reveals for the first time the ways in which wild weather swings and extreme icing events are negatively impacting the largest land mammal of the Earth’s polar realms—the muskoxen. The paper demonstrates that while this denizen of the Arctic and other cold-adapted species have spectacular adaptations, the previously unknown effects of rain-on-snow events, winter precipitation, and ice tidal surges are costly for the animals, if not deadly.

Muskoxen mothers can provide safety to their calves by warding off predators, and offer health in the form of good nutrition during pregnancy.  In the wild, bigger babies are more likely to survive.

The new study finds, however, that for juvenile muskoxen, growth is hindered because mothers cannot access food when it rains in winter instead of remaining cold and snowy.

“It’s a bit like trying to eat a salad that has had water dripped all over it and then is re-frozen to the point that it cannot be cracked,” explains lead author, Joel Berger, a senior scientist with the Wildlife Conservation Society (WCS) and Barbara Cox University Chair at Colorado State University.

Scientists from WCS, CSU, Russia’s Wrangel Island World Heritage, and the US Forest Service studied muskoxen for nearly a decade in both the Asian and Alaskan Arctic to detail their findings, engaging in both cold-weather fieldwork and by uncovering long-buried reports from the high Arctic.

The international study team concentrated on the growth and development of young muskoxen when icing events months before their birth impeded their mother’s access to food during pregnancy.

The scientists gathered the necessary data on skeletal growth during winter using ground photos of juvenile head sizes across multiple years both on Wrangel Island (a difficult-to-reach polar spot north of Siberian mainland) and in America’s Bering Land Bridge and Cape Krusenstern National Park units in western Alaska.  They found that when it rained in winter instead of snowing, mothers were increasingly challenged to meet the full nutritional support for their babies whose later size remained smaller than normal.

Study co-author Dr. Cynthia Hartway of WCS, said, “This study is significant because while there has been considerable research on the negative effects of major winter rain events, our results indicate that even minor amounts of winter rain can have negative and potentially long-lasting effects on the growth of arctic mammals.

In another example of the dangers of once unusual, but increasingly frequent Arctic weather events brought on by warming temperatures, the report details how a massive winter wind-whipped storm drove plates of thick ice across an inlet trapping a herd of muskoxen.  Fifty-two of the animals were entombed in ice graves when the average tide surged fifteen times greater than normal.  Other species, including Narwhals and Beluga whales, and sea otters are also entrapped in icing events.

In describing the significance of the findings, Berger offered: “Although the best studied species of the Arctic remains the ocean-adapted polar bear, we now know that off-shore events affect on-shore species. Muskoxen, as the signature species for land animals, foreshadow what we’ll see for other cold-adapted specialists when it comes to our warming planet.  The entire Arctic is changing for both its animals and people.  Sadly, when our ‘modern’ societies continue our imprudent management of carbon, we’ll continue to toast more than the Arctic.  Already we are.”