Myopia: A Close Look at Efforts to Turn Back a Growing Problem

NEI funds research to slow the increase in nearsightedness

Newswise — Several studies indicate that the prevalence of myopia is increasing in the U.S. and worldwide, and researchers project that the trend will continue in the coming decades. Otherwise known as nearsightedness, myopia occurs when the eye grows too long from front to back. Instead of focusing images on the retina—the light-sensitive tissue in the back of the eye—images are focused at a point in front of the retina. As a result, people with myopia have good near vision but poor distance vision.

About 41.6 percent of Americans are nearsighted, up from 25 percent in 1971.1  “The trend appears to be upwards in many other parts of the world, but the changes have been nowhere near as spectacular as in East and Southeast Asia,” said Ian Morgan, Ph.D., a myopia researcher at Australian National University. In the developed countries of East and Southeast Asia, the prevalence has now reached 80 to 90 percent among children with 12 years of school.2,3 Projections suggest that almost 50 percent of the world will be myopic by 2050.4

Also on the rise is high myopia, a condition that increases the risk of retinal detachment, glaucoma, and the early development of cataracts. While simple myopia is correctable, these pathological consequences make high myopia one of the leading causes of visual impairment and blindness, explained Morgan.

“With the increasing prevalence of high myopia, we’ll likely see a corresponding increase in these serious complications,” added Susan Vitale, Ph.D., an epidemiologist at the National Eye Institute. Whereas the prevalence of high myopia is about 4 percent5 in the U.S., in East and Southeast Asia, about 20 percent of children completing high school have high myopia and are now at high risk of uncorrectable vision loss.6

Although genetics play a role in myopia, the abrupt increase points to environmental factors. Several studies have shown a link between near work and myopia in children.7

Researchers are unsure why time outdoors helps prevent the onset of myopia. “One idea is that it’s just the amount of light to which children are exposed,” said Jeffrey J. Walline, O.D., Ph.D., associate dean for research, also at The Ohio State University College of Optometry. “In theory, more light causes more dopamine release in the retina, which slows eye growth.” Curiously, once myopia has begun to develop, spending time outdoors does not appear to slow its progression, he noted.

What goes wrong in eye development

Eyes grow rapidly in infancy, slow down at school age, and reach adult size by late teens. During this long growth period, the development of the eye is a tightly regulated process: As eyes grow, the curvature of the lens and the length of the eye must coordinate to maintain ability to focus light on the retina. Researchers theorize two ways this coordination might happen:

Some eye researchers believe that the physical constraints of the eye can account for normal and myopic eye growth. Think of the growing eye as a balloon that is slowly being inflated, suggested Mutti. The crystalline lens at the front of the eye is mounted inside the “balloon” by the ring-like ciliary muscle. The lens becomes stretched and flattened in coordination with the growth and expansion of the eye. “That makes it self-focusing,” explained Mutti.

When the expansion of the eye becomes uncoupled from the stretching of the crystalline lens, children become myopic, suggested Mutti. For example, if the ciliary muscle restricts the expansion of the eye, the lens will not stretch as the eye grows. Like a balloon that is pinched on one end, the eye will become longer than it should have been10. “The frozen ciliary muscle no longer stretches the lens to keep pace with the growing eye, and that makes the eye myopic,” Mutti explained. If this theory is correct, one potential way to treat a myopic eye would be to loosen the ciliary muscle, but there are currently no good ways to do that.

Another approach to understanding eye development is based on defocus, that is, the idea that the eye can detect whether light is focused in front or behind the retina, and grow in the appropriate direction to reduce the blur. The eye might be able to do this by reading chromatic cues because the index of refraction of the eye – the degree to which it bends light – varies with wavelength: The index of refraction is lower for long wavelength light (red) than for short wavelength light (blue). Thus, in the eye, the red wavelengths are focused farther back than the blue wavelengths. That difference is detected by cells in the retina with different sensitivities to long and short wavelengths, and that allows the eye to ‘know’ if it is myopic or far-sighted (hyperopic) and adjust growth appropriately, explained Earl Smith, O.D., Ph.D., Greeman-Petty Professor and dean at the University of Houston College of Optometry. Smith is currently investigating the effects of wavelength on eye development by rearing monkeys in red light and blue light, and preliminary results show that red light seems to protect against myopia.11

The best prevention for myopia in children is more time outdoors. Taiwan is making outdoor time part of the school curriculum, an initiative led by Pei-Chang Wu, M.D., Ph.D., director of the department of ophthalmology in the Kaohsiung Chang Gung Memorial Hospital. Since they increased time outdoors to a couple of hours in 2010, children’s vision is improving.12,13 Delaying the onset of myopia may reduce the severity of myopia and translate into proportionate reductions in high myopia, Morgan said.

Recently, low concentration (0.01%) atropine eye drops administered daily have been shown to be effective for preventing the onset of myopia without significant side effects. Atropine reduces the eye’s ability to maintain focus on objects as their distance varies. The effect of atropine eye drops on myopia is unclear, but one hypothesis is that atropine stimulates dopamine release in the eye.14

Researchers at the University of Houston and Ohio State University are testing the effectiveness of bifocal contacts lenses in slowing the progression of myopia. The randomized clinical trial called Bifocal Lenses in Nearsighted Kids (BLINK) Study, which includes children ages 7 to 11, explores the defocus theory.15

Bifocal contact lenses and corrective glasses both focus light on the central part of the retina called the macula. They differ in how they focus light on the peripheral retina. Glasses focus peripheral light to a point behind the retina and, therefore, may be signaling the eye to grow, explained David Berntsen, O.D., Ph.D., associate professor at the University of Houston College of Optometry and a co-investigator of the BLINK study with Walline. By contrast, the contact lenses used in the BLINK Study focus the peripheral light in front of the retina.16 “We believe, based on multiple animal studies,17 that focusing peripheral light in front of the retina is a potent stop signal for eye growth,” Berntsen said.

Other studies have shown promise for orthokeratology (ortho-k) contact lenses, which work by reshaping users’ corneas at night while they sleep. Users remove the lenses during the day. Ortho-k lenses change the shape of the cornea to focus peripheral light to a point in front of the retina, working in the same way as the bifocal lenses in the BLINK study.

“These trials need to be done for a while to understand if the lenses are truly beneficial, and if that answer is yes, just how beneficial they are,” said Mutti. Preliminary studies have shown that bifocal and ortho-k lenses might slow the progression of myopia in the first year.18 Some studies suggest there is no additional benefit beyond the first year. The three-year BLINK study will evaluate whether the benefit of the lenses extends beyond a year.

About the National Institutes of Health (NIH): NIH, the nation’s medical research agency, includes 27 Institutes and Centers and is a component of the U.S. Department of Health and Human Services. NIH is the primary federal agency conducting and supporting basic, clinical, and translational medical research, and is investigating the causes, treatments, and cures for both common and rare diseases. For more information about NIH and its programs, visit http://www.nih.gov/(link is external). 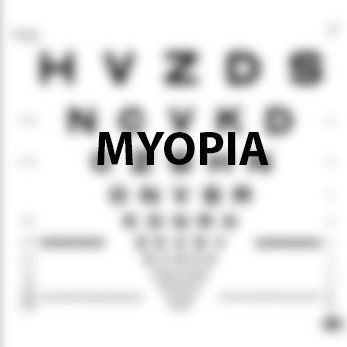 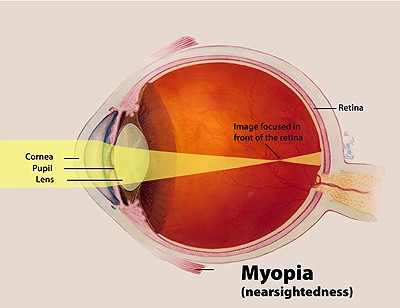 Caption: Diagram of eye with myopia. 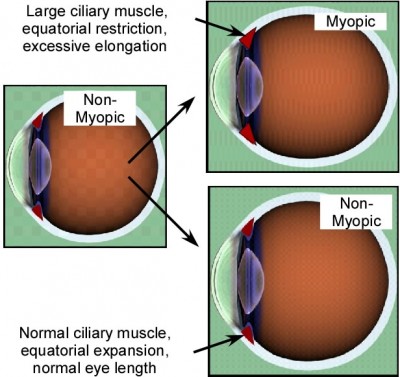 Caption: When the ciliary muscle restricts stretching of the lens as the eye grows, the eye becomes myopic.