NASA Pushes Exploration of Oceans in Our Solar System

Newswise — NASA has navigated our solar system with spacecraft and landers, but still, our celestial neighbors remain vast frontiers, particularly in the search for life. Now, an alliance of researchers will accelerate the quest to find it.

The NASA Astrobiology Program has announced the establishment of the Network for Life Detection, NFoLD, which connects researchers to pursue the detection of life and clues thereof on our neighboring planets and their moons. NFoLD includes an oceanic research alliance led by the Georgia Institute of Technology.

It is called Oceans Across Space and Time, OAST, and has received a $7 million NASA Astrobiology grant with the long-range goal of extracting secrets from present and past oceans on Mars, Jupiter’s icy moon Europa, and Saturn’s moon Enceladus. But OAST will also ramp up the study of the conditions that spawned first life in Earth’s oceans.

“With OAST, we finally hit the perfect mix of people, science questions, and supporting activities to really go after some of the most important unknowns in astrobiology,” said Britney Schmidt, OAST’s principal investigator and an assistant professor in Georgia Tech’s School of Earth and Atmospheric Sciences.

NFoLD is one of five new Research Coordination Networks that the NASA Astrobiology Program has announced. The other RCNs pull together research communities that include the study of early Earth and its chemistry, evolution, distant habitable worlds, and exoplanet systems.

Oceans Across Space and Time could one day help NASA put a submarine on a rocket to Europa to look for life in the ocean beneath its ice crust. Or OAST could join NFoLD colleagues to help NASA explore parched Martian landscapes that once were oceans.

But the path to our space neighbors leads through studying Earth. Field and lab experiments on our planet will divulge more knowledge about chemical and biological evolutionary strategies so that researchers can develop instruments and methodology that reliably detect signs of life on other planets and moons.

"We don't yet have a slam-dunk measurement that we could make on another planet to definitively say ‘this is life,’” said Schmidt, who coordinates OAST and led the application efforts to establish it. “OAST’s main goal is to take a suite of technologies into the field on Earth to make measurements side-by-side while returning samples to the lab to understand.”

Then, when that is very finely honed, send it aloft.

One of NFoLD’s goals is to participate in future astrobiology space missions from the start so that they can successfully identify target spots on other planets or moons where signs of life could actually be detected if present.

"A major challenge for life detection is where on a given planet or moon to look for life,” said Jeff Bowman, deputy principal investigator of OAST and an assistant professor at Scripps Institution of Oceanography at UC San Diego. “The density of life on our own planet extends across several orders of magnitude. Look for life in the wrong place and Earth could appear lifeless.”

OAST’s team has the expertise to bridge earthly data and celestial goals.

Many of its 18 co-investigators and their teams have already explored biogeochemistry in our own planet’s eons-old rock record, in the atmosphere, the oceans, and the icecaps with an eye to extrapolating the data to other worlds. Other OAST researchers have helped design Mars probes or build robotic submarines intended to one day dive into Europa’s subsurface ocean to detect life or at least a hint of it.

“OAST researchers have expertise in detecting and characterizing life in a variety of harsh environments like the Antarctic, the deepest ocean trenches, and lakes with extreme chemistry and salinity,” Bowman said. “We will leverage this expertise to understand how life may be distributed in different ocean environmental extremes around the solar system.”

“I'm particularly proud of the high number of women and pre-tenure scientists we've engaged through our project,” said Schmidt. Five leaders in OAST are women, and 12 researchers are early career or pre-tenure. The project will also support graduate and undergraduate students as well as postdoctoral researchers through the NASA Postdoctoral Program. 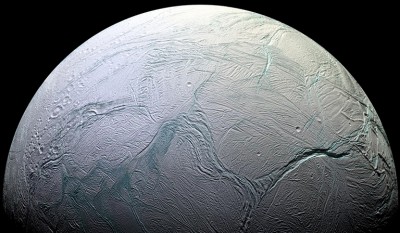 Caption: Under the thick ice crust of Saturn's moon Enceladus flows water. Could it harbor life? A new NASA-funded research alliance called Oceans Across Space and Time wants to know. 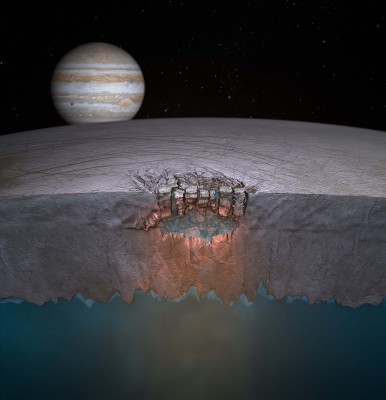 Caption: Europa. The name of Jupiter's icy moon has spread around the world as a hopeful candidate for life elsewhere in our solar system. If it's there, a new NASA-funded research alliance called Oceans Across Space and Time wants to find it. 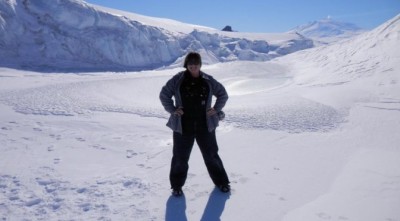 Caption: Many months in Antarctica is the price Georgia Tech's Britney Schmidt pays to further her research on the search for life in present and past oceans across our solar system. The principal investigator of Oceans Across Space and Time works on instrumentation aboard robotic submarines that scour under-ice oceans for signs of life. 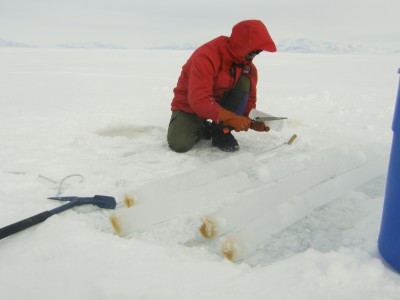 Caption: Jeff Bowman from Scripps Institution of Oceanography takes ice core samples on Antarctica. As OAST's deputy principal investigator, he will focus his research on conditions conducive to life in Earth's under-ice oceans to search for signs of it elsewhere in our solar system. 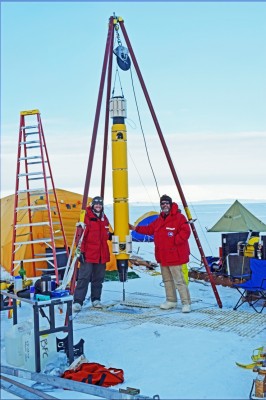 Caption: A robotic submarine outfitted to probe for signs of life is lowered under the ice in Antarctica. In the future, a highly updated version could be placed on a rocket for deployment in under-ice oceans on planetary neighbors in our solar system. 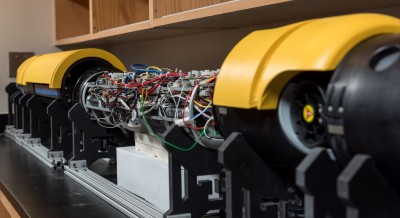 Caption: Showing its guts, the robotic submarine Icefin rests on a lab bench at Georgia Tech. Icefin probes for signs of life in waters under ice surfaces. In the future, a highly updated version could ride a rocket to our planetary neighbors in the solar system for deployment in their under-ice oceans. 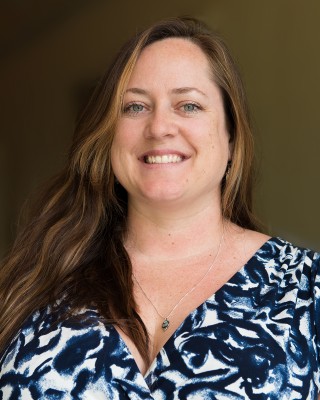 Caption: Many months in Antarctica is the price Georgia Tech's Britney Schmidt pays to further her research on the search for life under the ice. The principal investigator of Oceans Across Space and Time works on instrumentation aboard robotic submarines that scour waters underneath ice for signs of life.

Caption: The mission of applying oceanic research insights gained on Earth to Europa, Enceladus, Mars, and Neptune forms the logo of the new research alliance Oceans Across Space and Time.