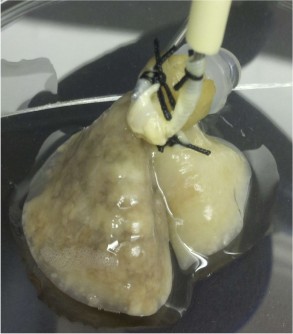 Newswise — Without good models to study cancer metastasis -- the spread of cancer cells from one organ to another -- cancer researchers have struggled to understand tumor progression fully, and new therapies targeting the main causes of death are slow to come. Researchers at Houston Methodist have invented a new, ex vivo lung cancer model that mimics the process of tumor progression. Tests of the model are published this month in The Annals of Thoracic Surgery (now online).

The model can be used to study the progression of other cancers besides lung.

The "4-D" model is created by removing all the cells from a vertebrate lung, leaving the enveloping matrix, which provides support for cell growth and development. The native lung matrix, once cells are removed, is further modified and placed in a bioreactor to allow for human tumor cells to grow.

Unlike other tumor models, the 4-D model allows the tumor cells to form 3-D nodules that grow over time. Kim called an earlier version of the model "3-D ex vivo." The new model's fourth dimension is flow, Kim explained, as the latest version incorporates the movement of fluids between lungs through blood vessels. This fourth dimension allows the model to show the growth of primary tumors, the formation of circulating tumor cells (CTCs) and formation of metastatic lesions. These three steps of cancer progression aren't a part of any single in vitro or ex vivo model. And unlike in vivo models of metastasis, which often require researchers to wait months for information about metastasis progression, the 4-D model can provide data in a matter of days. Kim and his colleagues also investigated gene expression in cancer cells during different phases of tumor progression. They found the gene signatures of experimental CTCs were associated with poor survival in lung cancer patients.

"The model allowed for the isolation of unique gene signature of circulating tumor cell phase of metastasis, which may provide a clue to the mechanism of tumor progression," Kim said.

In future experiments, Kim said his group will focus on the unique gene signatures of circulating tumor cells to better understand the mechanism of tumor progression. Kim said this may provide ideas for new therapies that stop metastatic spread in patients with lung cancer.