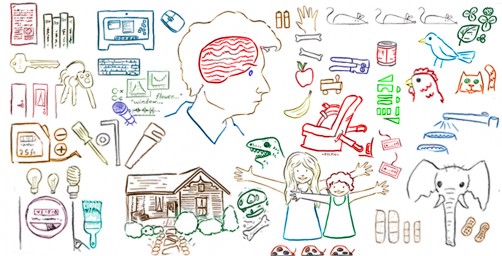 Newswise — In Proust’s novel Recollection of Things Past, the distinctive smell of a lemon madeleine launches the narrator on a long, involved reminiscence of his past that fills seven chapters.

It is an extreme example of what neuroscientists term “mental time travel” – the recollection of memories so rich in detail regarding the time and place of an original experience that it is much like traveling through time.

In a paper published Feb. 18 in the Journal of Neuroscience, a team of Vanderbilt scientists shed new light on how the brain processes these elaborate memories by analyzing the brain activity of individuals performing a simple memory recollection task. The researchers found that they can use the activity patterns in a specific region of the brain to substantially improve their ability to predict the order in which the participants recall information that they have recently studied.

“It’s extremely important that we understand what different brain regions are doing as we search through our memories,” said Assistant Professor of Psychology Sean Polyn who headed the study. “Diseases like Alzheimer’s and epilepsy are devastating to memory, and this information can help us develop treatments to preserve patients’ memories, and identify adverse effects that new psychotropic drugs may have on people’s memory.”

Scientists have known for some time that a portion of the brain called the medial temporal lobe plays a central role in memory because injuries to the MTL cause amnesia and other memory-related problems. However, they have not been able to answer the question: How does the brain control the fidelity of an individual memory?

Of course, not all memories are recalled equally. High fidelity Proustian memories are at one end of the spectrum. At the other are bits of information that a person remembers clearly, but in complete isolation, without any accompanying details.

Polyn, working with doctoral students James Kragel and Neal Morton (who is now at the University of Texas, Austin), has developed a model that accounts for how the structures in the MTL support memory retrieval. They have found that the anterior region of the MTL signals that a memory is being retrieved, but doesn’t indicate how detailed it is. However, when the posterior region of the MTL becomes active it indicates that the person is experiencing a “time travel” memory accompanied by considerable detail.

The researchers tested their model in an experiment with 20 participants (seven male and 13 female) between 18 and 35 years of age. They were put in an fMRI brain scanner and given a list of 24 names of common objects like horse, boat and window. Depending on the object they were asked to decide if it was big or small, animate or inanimate. (The purpose of the question was to make them concentrate on the words.) After a brief pause, they were asked to recall the words they had just studied in the order they occurred naturally.

The researchers found that when a participant’s brain scan indicated that they recalled an object with high fidelity, then their next response was likely to be the next item on the list. However, when the brain scan indicated that the object was an isolated recollection, then the next object the person recalled could come from anywhere on the list.

For example, the participants might be asked to study the words “horse, window, robot and boat,” in that order. An individual who experienced a time-travel experience when he or she recalled the word “horse,” would be very likely to recall “window” immediately afterward. If, on the other hand, the person’s memory of “horse” was low fidelity, his or her next response might instead be the more distant word, “boat.”

Polyn’s group had previously developed a model of memory search that could be used to predict the order in which people would retrieve these items from memory. For example, the model predicts that people will tend to first recall the items from the end of the list, and if an item from the middle of the list is recalled, the next recollection is likely to come from a nearby list position.

“This model was much better than chance at predicting what a person would recall next, but when we told the model what a person’s brain activity was at the moment they recalled a particular item, the model became much better at predicting which item would be recalled next,” Polyn said. “This demonstrates that the brain stamps memories with a temporal code. These time-travel recollections allow the brain to retrieve that temporal code, which makes memories for nearby things more accessible, in this case the next item in the list.”

The temporal code acts something like the time stamp that computers put on files. When you search for files stamped with a specific date and time, you retrieve all the files saved at the time you specify. Time-travel memory acts in much the same way, through a process psychologists call “reinstatement”. This process is even more flexible than a computer, in that the temporal code can help you retrieve not just memories from the exact same time, but memories nearby in time, as well.

When a strong memory is formed, it may include information about the sights, sounds, smells, emotions, and other information that was present at the time of the experience. All of this information becomes temporally linked, and time-travel memory allows a person to bring it back to mind, as when Proust smelled his famous madeleine cake.

Polyn’s memory model is an example of a new generation of brain simulations that are attempting to link brain activity with specific cognitive functions.

The research was funded in part by National Science Foundation grant 1157432.